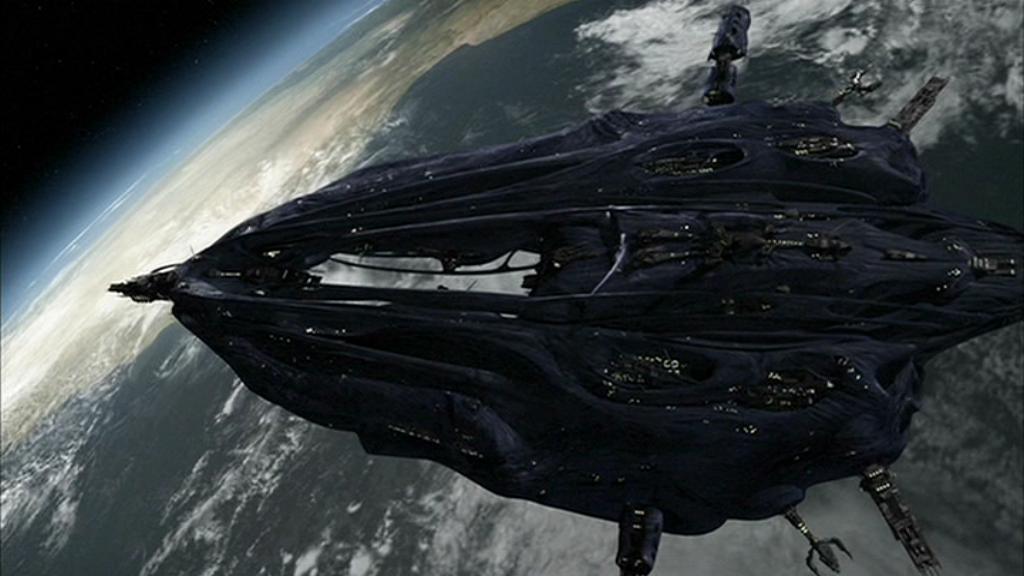 A massive Wraith mothership, home to an untold number of Wraith who hibernate for centuries at a time. The large ships are heavily armed and capable of interstellar travel, and of landing on the surface of a planet.

Most of the hive ship first encountered by the Atlantis expedition was concealed beneath the surface of their homeworld -- so much so that the team did not realize it was a ship at all. It sat undisturbed on the surface for so long that tall trees had grown on its dorsal surface. Only the Keeper and a small number of warriors were on guard to defend the sleeping race; when the Keeper was killed, the sleeping creatures began to awake.

The craft contains untold numbers of hibernation pods, as well as numerous stasis units designed to hold captives ready to be fed upon. It is also equipped with at least one holding cell for individuals awaiting an audience with the Wraith before their life-force is consumed. It also contains a larger number of Wraith Darts, the species' favorite small-craft fighter.

There are at least 21 hive ships in the same region of the Pegasus Galaxy that Atlantis is in, and at least 60 total. Because the Wraith species are aligned into competing factions, hive ships can often be found in conflict with one another.

Rising, Part 2 - Sheppard takes the Puddle Jumper down to the Wraith hive ship, intent on rescuing Sumner and his men, as well as Teyla and a handful of Athosians.
Thirty Eight Minutes - The team revisits the Wraith homeworld, only to find that the hive ship has left -- only a massive crater where it hibernated for centuries remains.
Underground - The team infiltrates a hive ship with the Genii and steal a Wraith data node -- which reveals that at least 60 hive ships are now on the move.
The Brotherhood - A Wraith Dart attack on Atlantis reveals that three hive ships are en route to the city -- the attack the team has been expecting.
Letters From Pegasus - Sheppard and Teyla investigate the Wraith armada's movements, discovering that they are stopping along the way to Atlantis in order to feed.
The Siege, Part 1 - Dr. McKay leads a team to reactivate the Ancient defense platform, which destroys one of the approaching hive ships with a single blast.
The Siege, Part 2 - The two survivign hive ships arrive at Atlantis and begin a devestating assault.
The Hive - Two hive ships destroy one another after Colonel Sheppard manages to drive a stake of distrust between the Queens.
Enemies - Allied with Michael's hive, the Atlantis team attacks a hive ship and deploys a weaponized form of Beckett's gene therapy -- turning the Wraith crew into humans and leaving them vulnerable to their enemies.
Spoils of War - Teyla uses her telepathic abilities to pilot a Wraith hive ship recovered by the Atlantis team, eventually crashing it into a secret Wraith lab.
Infection - Todd's hive shows up over Atlantis infected by a virus, and eventually splits in half and crashlands into the ocean.
Enemy At the Gate - A Wraith scientist successfully interfaces Ancient Z.P.M.s with a hive, allowing the ship to grow to a "super-hive" more powerful and advanced than any Wraith ship before it.