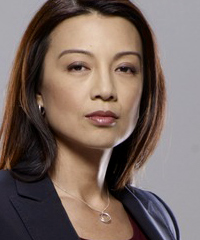 Human resources officer and representative of the International Oversight Advisory at Icarus Base, trapped millions of light years from home on board the Ancient ship Destiny when base personnel were forced to evacuate through the Stargate. It is not known if Wray's presence on Icarus was a temporary visit or a permanent assignment, but now on board Destiny she has assumed a role as a sort of de facto leader of the civilian population -- sometimes working alongside Colonel Young, and sometimes butting heads.

As a human resources advisor she got know members of the Icarus team rather well (particularly Tamara Johansen). Wray has untested leadership abilities, and can take charge in a pinch. She has a history of bad blood with Dr. Nicholas Rush, but she has also sided with Rush against Colonel Everett Young. At times she has appeared intent on civilian control of the small colony living on the ship.

Wray is gay and has a long-term relationship with a woman, Sharon Walker, back home on Earth. The Ancient communication stones have given her numerous opportunities to see Sharon, though the distance continues to strain their relationship.

Air, Part 1 - Camille Wray evacuates with the rest of the Icarus personnel through the Stargate, and holds Dr. Rush directly responsible when she realizes the group is stranded aboard a dying spacecraft.
Air, Part 2 - Wray helps sort the supplies which made it through with the team, and raises objections to Sergeant Greer's release from confinement.
Darkness - Before the ship loses power, Wray and Young discuss HR problems aboard Destiny.
Light - Wray is one of 15 randomly drawn winners for a seat on a shuttle which will escape Destiny's presumed destruction inside a star.
Life - Camille uses the Ancient communication stones to trade bodies with someone back on Earth, giving her a chance to visit home and see her partner and her parents again.
Justice - When Colonel Young is framed for murder he hands temporary command to Wray, who leads an evidentiary hearing against him.
Divided - Wray and Rush orchestrate a civilian coup to take control of Destiny from the military, but fail.
Sabotage - Camille spends three weeks on Earth with Sharon, but this time in the body of the quadriplegic scientist whose expertise is needed on the ship.
Pain - Camille is stabbed by Rush, who hallucinates that she is an alien. Sgt. Greer stalks her and threatens to kill her, believing she is leading another plot to take over the ship.
Pathogen - Camille visits Sharon at home on Earth again, and learns that she is struggling with Camille's prolonged absence.
Alliances - On a return trip to Earth via communication stones, Camille and MSgt. Greer are caught in a Lucian Alliance attack on Homeworld Command, and must find and disarm an alien bomb.
Common Descent - Camille meets one of her descendants, an aged man who inherited the name of her father, Yaozu.
Epilogue - In an alternate timeline Camille is among the last and oldest survivors of Destiny's crew, who have built a new life off the ship and established an advanced civilization capable of interstellar travel.