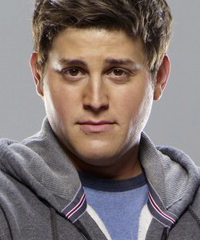 A brilliant young man who became a crucial member of the Destiny crew after he was drafted into the Ninth Chevron Project and found himself in the middle of an emergency evacuation to the ship. Eli quickly established himself as one of the struggling crew's most valuable members.

Eli had few prospects before he joined the program (his job before the Air Force was in the fast food industry). Once a student at M.I.T., Eli dropped out because he felt he was not being challenged. He returned home to play online games and help with his mother's medical condition. A nurse who was accidentally stuck by a needle while trying to restrain a junkie in the ER, she caught H.I.V. Soon after, Eli's father left them. Eli was 14 years old at the time.

Eli spent a month developing a formula to solve a puzzle hidden within an online game called Prometheus. This prompted the arrival of Colonel Jack O'Neill and Dr. Nicholas Rush, who wanted his assistance in exchange for the Air Force treating his mother. He later welcomed her to Destiny for a brief visit to prove that what he told her about his new life was true.

Soon Eli found himself hard at work alongside Rush on Icarus planet, attempting to solve the Stargate's power issues which were preventing a nine-chevron lock. It was Eli's idea that the nine symbols had to be specific to Earth's point of origin, regardless of where it was dialed.

When the base fell under a surprise attack Rush implemented Eli's suggestion and established a wormhole. The computer systems crashing, the Icarus personnel were forced to evacuate to Destiny, the ship on the other side.

While exploring the Ancient ship Eli came across a laboratory including a receptacle for numerous flying sensors, which he dubbed "kinos." Discovering they had the ability to record, he took one for himself and began to record logs of the Destiny and her crew in the event someone would later find the ship.

Air, Part 1 - Eli Wallace is recruited to help solve the mystery of the ninth chevron with Dr. Rush, but ends up with more adventure than he bargained for.
Air, Part 2 - Eli discovers the storage bay for the Destiny probes, and names the devices "kinos."
Air, Part 3 - Eager to contribute to the mission, Wallace joins the expedition to a strange world hoping to uncover supplies which will restore the Destiny's life support.
Light - Eli turns his Destiny documentary into a "message in a bottle" in the hopes of being recovered from a kino in the future.
Earth - Using the communication stones, Eli visits his mother on Earth -- but does not tell her who he really is.
Time - Eli confides to T.J. that he is worried about his mother, who has H.I.V.
Divided - Eli sides with Colonel Young when the civilians try to take control of the ship.
Pathogen - Eli rushes home to his mother's bedside when she takes a turn for the worse, and tries to convince her that he is her son -- even though he is in someone else's body.
The Greater Good - Eli strikes up a romance with Ginn, a brilliant young scientist who previously worked for the Lucian Alliance.
Malice - Eli is devastated when the Lucian Simeon murders Ginn as a traitor, but is prevented from seeking revenge.
Hope - Eli discovers that Ginn's consciousness is alive and well and trapped inside Chloe's body, and looks for a way to rescue her.
Epilogue - Thanks to the kino records of the Novans, Eli glimpses an alternate timeline where he helped found a civilization -- including marrying Corporal Barnes and having children.
Blockade - With the ship under attack by drones Eli conceives of a risky plan to evacuate nearly all of the crew, while he and Rush recharge the ship inside a dangerous blue super-giant.
Gauntlet - After hatching a plan to put the crew into stasis to survive a long journey between galaxies, Eli volunteers to be the one person who stays awake -- hoping to repair the final stasis pod before his life support runs out.