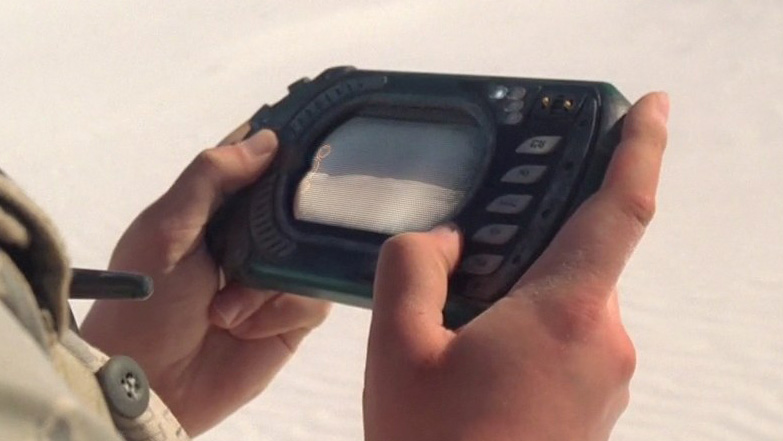 Handheld electronic device. The remote is the only portable interface for a kino, and can control video recording toggle as well as the device's movement. It also functions as a portable dial-home device, and is necessary for dialing the Stargate from the surface of a planet (since there are no dial-home devices paired with Destiny-type Stargates).

If on a mission with an away team, the remote keeps an accurate countdown of time before Destiny departs from the Stargate network. It also lists the addresses of all gates that are in range of the current planet, as well as the address of Destiny when it is in range, updated in real time.

Air, Part 2 - Eli Wallace discovers the bay where kinos are kept, as well as the remotes which guide them.
Air, Part 3 - A remote is sent with the away team to a desert world so that they may return home, but is almost lost when Franklin attempts to flee to another planet with the device.
Light - Eli sends a kino outside the ship, giving the crew their first external look at Destiny on the remote's display screen.
Human - Eli takes a remote to explore the underground ruins of a dead civilization with a kino.
Lost - The remote serves as the team's only link home when Eli, Chloe and Matt are left behind by the ship.
Aftermath - When the survivors of a shuttle crash unbury the planet's Stargate, Eli uses a remote to confirm Destiny's presence.
Cloverdale - Sgt. Greer uses the Ancient remote to dial a planet's Stargate again and again, using the unstable vortex to protect Matt and Chloe from attacking creatures.