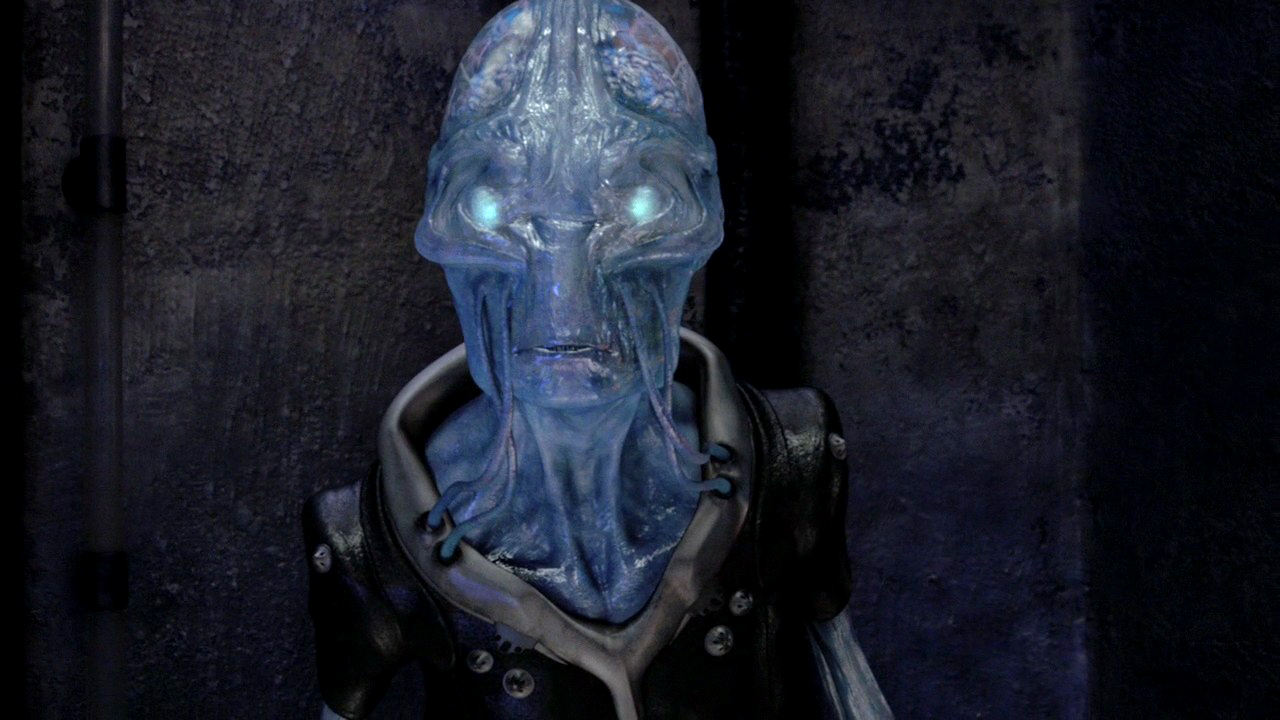 An advanced, space-faring alien species that occupies at least one galaxy far from the Milky Way. The aliens -- whose true name is unknown -- discovered the Ancient deep-space exploratory vessel Destiny when it was still unmanned, tagging it with a tracking device so they could follow the ship through F.T.L. and study it.

Their intentions appear to be to get on board and exploit the ship's advanced technology, which may be superior to (or just different than) their own. When a group of humans from Icarus Base boarded the ship through the on-board Stargate and took up residence, the aliens nearly managed to take advantage of the situation and make it past Destiny's automated defenses.

The alien species is extremely hostile, and showed themselves to be unwilling to talk peacefully with Destiny's new crew. They abducted Nicholas Rush and Chloe Armstrong, holding them in water tanks and probing their minds with telepathic technology. They also surgically implanted a tracking device in Rush's chest, and subject Chloe to genetic manipulation -- beginning a slow process of transformation on a cellular level. Their long-term agenda remains a mystery.

Producers may have intended to establish this species' name as the "Nakai", but as this was never established on-screen it should not be considered canon. During the show's run they earned the nickname "Blueberry aliens" among fans.

Air, Part 3 - An alien pod detaches from Destiny, showing that they have been tracking the ship for some time.
Justice - The crew finds a downed space ship on a desolate planet, and learn later that it belongs to this alien race.
Space - The Destiny crew has its first encounter with the aliens after the communication stones send Colonel Young's mind into an alien body.
Divided - The aliens find and attack the ship, hoping to drain its shields before it goes back into F.T.L.
Sabotage - The crew suspects that the aliens use a communication stone to take over Lt. James and sabotage Destiny's F.T.L. drive, finding the ship in the expanse between galaxies and attacking again.
Pain - Nicholas Rush hallucinates that a group of aliens board Destiny through the Stargate and hunt him through the dark corridors.
Trial and Error - Destiny tests Colonel Young with an unwinnable battle scenario, in which a fleet of the alien ships show up and demand he hand over Chloe.
Deliverance - With no way to stop Chloe's transformation the crew hand her over to the aliens responsible, who (apparently) heal her and return her to her friends.