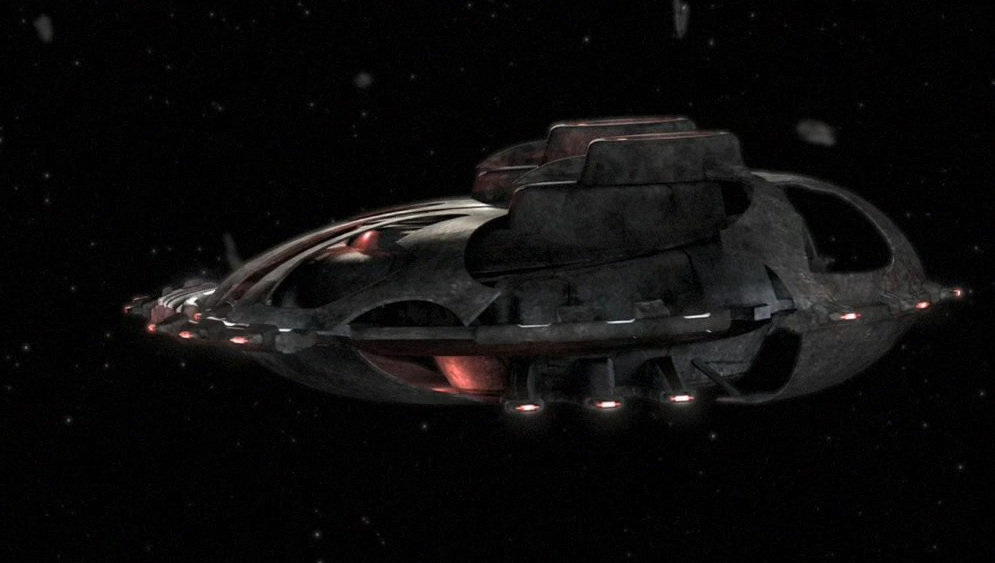 Powerful, space-faring weapon system created long ago by an unknown race to win a war. Following the war the drones entered a phase of long-term stasis, only to be awakened accidentally by the Ursini many centuries later. The Ursini then found themselves under siege by the remnant weapons, even though their creators were apparently long-gone.

The drones appear to be programmed to seek and destroy any advanced technology. They are small and very fast, with powerful energy weapons and a high degree of maneuverability. They are also capable of operating in the atmosphere of a planet, and will attack the inhabitants of a planet's surface. One drone on its own is no match for a ship like Destiny -- but they attack in groups of dozens or hundreds, and together the swarm is able to inflict considerable damage.

There are at least two types of drone ships. The smaller version is small enough to fit inside the rear compartment of Destiny's shuttle. The larger is probably closer to the size of the shuttle itself, and has an elongated (rather than round) design.

The drones have one vital weakness: they continually rely on a command ship to operate. The command ship controls and coordinates their movements, and without a command ship (with the notable exception of Destiny's first encounter with them) they return to a dormant state.

Resurgence - Destiny investigates an anamolous energy signature, and wakes up a group of drones that nearly destroy the ship.
Deliverance - Destiny and the Ursini attempt to destroy the drone command ship so that the Ursini can return home.
Common Descent - Drones unexpectedly return to attack Destiny, indicating that they are actively pursuing them across the galaxy.
Blockade - Destiny is attacked by drone ships while attempting to recharge its power reserves, forcing most of the crew to gate to a nearby planet -- where the weapons eventually locate and attack them again.
Gauntlet - In order to escape the relentless drone attacks, the crew of Destiny decides they must enter stasis in order to make a long jump in between galaxies.