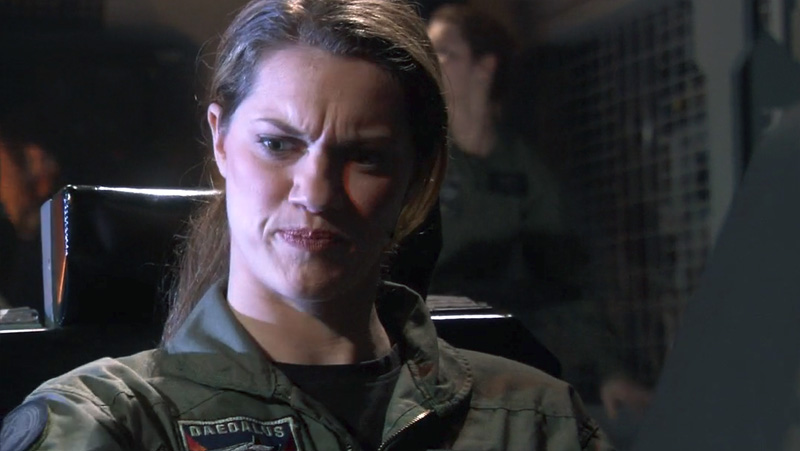 Pilot and tech officer assigned to Earth's Daedalus-class deep space carrier group. Cooper piloted Daedalus during the ship's maiden voyage across the expanse between the Milky Way and Pegasus Galaxy to Atlantis, where she piloted the ship into combat with a Wraith hive fleet in defense of the city. A year later she piloted an F-302 support fighter launched from the Daedalus, engaging the Wraith alongside John Sheppard under the call sign "Dagger Two."

Sometime thereafter Cooper was reassigned to the Apollo, where she also served on the ship's bridge -- now under the command of Abraham Ellis. But she later returned to Steven Caldwell's command on the Daedalus.

Note: Emma Cooper's name appears on her uniform name tag in multiple episodes. She is sometimes credited as "Meyers." The name tag "Pat Meyers" appears only in her final appearance, in an alternate timeline.

Emma Cooper is named for the young daughter of series co-creator Robert C. Cooper. She played a very young version of Adria in the Stargate SG-1 episode "Flesh and Blood."

The Siege, Part 3 - Cooper pilots the Daeadlus in its battle with the Wraith during the second siege of Atlantis.
The Intruder - Cooper pilots Daeadlus in a trip ferrying personnel from Earth back to Atlantis.
No Man's Land - Cooper pilots an F-302 under the call sign "Dagger Two" in an attempt to disable a Wraith hive ship before it can jump to hyperspace.
First Strike - Now on the Apollo, Cooper mans the main operations console in the ship's attack of Asuras and the ensuing aftermath.
The Kindred, Part 1 - Cooper is back on board the Daedalus when it ferries Sheppard's team to one of Michael's remote research outposts.
The Last Man - In an alternate timeline, Cooper (wearing a "Pat Meyers" name tag) is assigned to the Phoenix -- which is destroyed by the Wraith.