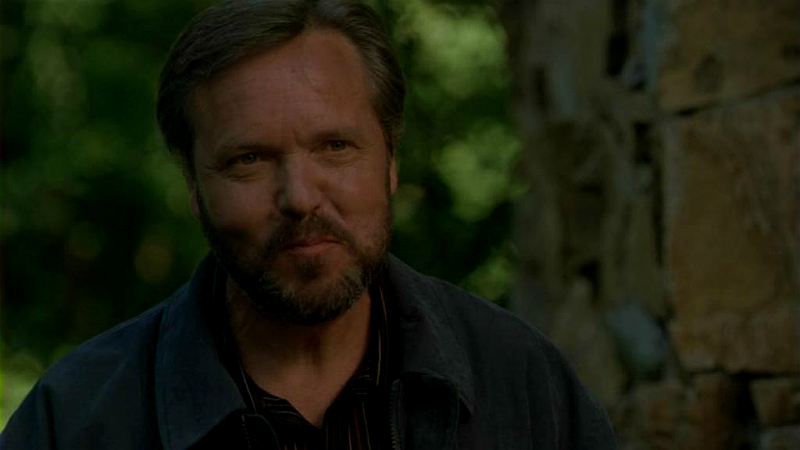 A former Colonel, Harry Maybourne is a rogue intelligence agent with his own agenda -- which sometimes causes him to work against the S.G.C., and sometimes with them. While a member of the U.S. military, Colonel Maybourne never brought good news when he visited the base. His first visit to Stargate Command was to quickly and efficiently collect a group of Tollan refugees rescued by SG-1, planning to lock them up for study -- even ordering those under his command to open fire on the alien refugees. The following year, he arrived to cart Teal'c off to a medical facility for study, placing him in chains.

Colonel O'Neill and Maybourne got off on the wrong foot from the very beginning, but Jack eventually came to hold some small measure of respect for the man -- particularly after the several times they joined forces. When Maybourne led an armed force to retake the base from an alien threat, a spark of appreciation appeared between the two men.

Not long afterward, when Maybourne heard O'Neill had been discharged from the S.G.C. for stealing Tollan technology, he made his move. He exposed his rogue N.I.D. operation to O'Neill and recruited him to command an off-world unit. Maybourne explained that he was in charge of an offshoot, not-quite-legal group. Their goal is to accumulate technology to defend Earth against the Goa'uld -- at any cost.

But O'Neill betrayed Maybourne and had his team arrested. He immediately ratted on Maybourne, who had fled from the United States before authorities could take him into custody.

After the Russians acquired their own Stargate, Maybourne traveled to Russia and offered his services and knowledge to them, along with top-secret S.G.C. personnel files and mission reports. During his brief tenure with the Russians, he was taken over by a water life form from another world. He was saved by SG-1, but was taken into custody. Maybourne was convicted of treason and sentenced to death.

When the rogue N.I.D. blackmailed General Hammond into retiring, O'Neill had Maybourne temporarily released from prison to help him get the general reinstated. By blackmailing Senator Kinsey, Maybourne was able to escape before he could be taken into custody once again. He remained at large for two years, occasionally rendering unofficial aid to Colonel O'Neill and proving himself worthy of his respect. To some degree, Maybourne redeemed himself.

Harry eventually decided that he wanted to live out his life off-world, in an alien paradise where he wouldn't have to worry about being pursued by the government any longer. He tricked O'Neill and SG-1 into taking him on a mission, where he used an alien device built by the Furlings to transport himself to what was once an alien paradise. But there was no paradise; everyone had killed one another long ago, the victims of a Goa'uld plot.

Thanks to another good word from his friend Jack, Maybourne was relocated to another planet by the Tok'ra, where he could live out his life in peace. A short while after arriving on the planet he discovered some Ancient ruins.

Arkhan the First greets SG-1. From "It's Good to be King."

Among the fallen stones Maybourne discovered a series of inscriptions written in the Ancient language. He deciphered them and found it was an historical record of events on the planet, some of which had yet to happen. Using this information he was able to "predict" disasters before they happened, and the people were so impressed they made him King of their land. When SG-1 arrived they found "Arkhan the First" sitting on his throne.

Among the inscriptions was a piece that stated that the Goa'uld would return to reclaim the land, but that they would be defeated by visitors. Sure enough, shortly after SG-1 arrived, a Jaffa force came through the Stargate and Ares arrived in his Ha'tak. Using a Puddle Jumper discovered hidden near the ruins Jack O'Neill destroyed the mothership, and Ares's First Prime Trelak was killed by Teal'c.

Despite learning the truth about their king, the people decided that the advances in their civilization he had taught them, such as irrigation, a water mill and a legal system, outweighed his deception and Maybourne was asked to stay on as king.

Enigma - A member of the secret N.I.D. organization, Colonel Maybourne visits the S.G.C. to take custody of the Tollan -- a group of alien refugees from an advanced human society -- but is thwarted.
Bane - When an alien insect sting begins to transform Teal'c, Maybourne takes custody of him for study and dissection. But Teal'c escapes the N.I.D., and is saved.
Touchstone - SG-1 learns that a rogue N.I.D. team is using Earth's second Stargate to steal technology from other worlds ... and Maybourne may be behind it.
Foothold - Carter goes to Maybourne for help when the base is overrun by aliens disguised as S.G.C. personnel, but he believes she is hallucinating, until he sees the aliens for himself. Maybourne himself leads the assault team that retakes the base when Carter exposes the aliens.
Shades of Grey - Maybourne recruits O'Neill to command an off-world rogue team, stealing technology for Earth. But O'Neill is operating undercover, and exposes the operation.
Watergate - Having fled the U.S. after his N.I.D. operation was exposed, Maybourne brought the secrets of the Stargate to Russia -- who had recently acquired a Stargate of their own.
Chain Reaction - Jack manages to get Maybourne out of prison, and asks for his help in getting the N.I.D. off General Hammond's back. After they expose the N.I.D.'s blackmail, Maybourne escapes his treason conviction and flees to another country.
Desperate Measures - Maybourne returns to help O'Neill again, when a wealthy man kidnaps Major Carter. He also reveals that he acquired a Goa'uld symbiote from the Russians for the man, Adrian Conrad.
48 Hours - Maybourne helps Jack save Teal'c's life by tracking down the Goa'uld taken captive by Colonel Simmons.
Paradise Lost - Wishing to escape Earth and permanently resettle off-world, Maybourne orchestrates a plot to get SG-1 to a world he believes is home to an alien utopia, whose inhabitants will welcome him into their midst.
It's Good to Be King - SG-1 arrive on a planet to find that Maybourne has gone up in the world.