Difference between revisions of "Jack O'Neill" 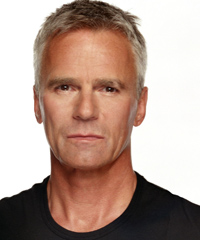 O'Neill is forced to relive a failed black-ops mission. From "The Gamekeeper."

With this in mind, it can be deduced that O'Neill married before 1988. He confirmed he and wife Sarah were together at the time of his imprisonment, since she was his primary motivation for escaping. Sometime after escaping the prison, Charlie O'Neill was conceived.

Close relationships seem to be difficult for Jack. Major Charles Kawalsky was a friend of O'Neill, despite the fact he never knew Jack had a son. Kawalsky claimed he could beat jack at any game of street hockey. They had served together on at least one black ops mission in East Germany, in 1982. Their mission was to infiltrate a wooded compound and capture a Russian agent code-named "Boris"; but enemy soldiers were waiting, and O'Neill's friend and commanding officer, John Michaels, was killed.

A photo of Jack and his son, Charlie. From "Cold Lazarus."

During his off hours Jack spent time with his wife and son. Family brought terrific meaning to his life. Simple games of catch and baseball, his son's favorites, fulfilled the parts of his existence that were inaccessible through his military career. But one fateful autumn day, on the day Charlie came home from school with his class pictures, the boy uncovered his father's handgun and fatally shot himself inside their home. Jack and Sarah heard the shot from outside the house, and rushed Charlie to the hospital. The child did not survive.

Sarah and Jack hear the gunshot that would destroy their life. From "Cold Lazarus."

The Stargate was opened around 1996, forever changing O'Neill's life. On the other side of the portal was the Supreme System Lord Ra, who had seeded the world of Abydos with humans. With the help of Jackson and the native Abydonians, O'Neill instead used the bomb to obliterate the false god in orbit aboard his mothership. O'Neill returned to Earth, leaving Jackson, per his request, on Abydos.

Jack makes his feelings for Sam known. From "Window of Opportunity."

The SG-1 team and the worlds they have explored have forced O'Neill to reassess his future and his relationships. His initial dislike for Jackson changed to a fondness over the course of many years. Frequently disagreeing with the scientist, he found common ground nonetheless, realizing that both complemented each other's strengths, both in diplomacy and in battle. When Jackson died and ascended to a higher plane of existence, O'Neill struggled with how to deal with his grief -- but was eventually reunited with his lost friend. Jack also became a good friend and brother of Teal'c, a warrior as much as he, whom he convinced to turn against the Goa'uld and join them.

O'Neill is murdered by Baal and repeatedly revived in a sarcophagus. From "Abyss."

He has also directly contributed to the defeat of such powerful Goa'uld as Ra, Apophis, Cronus, Seth, Hathor, Sokar, Nirrti, Heru'ur and Marduk, among others.