Difference between revisions of "Lorne" 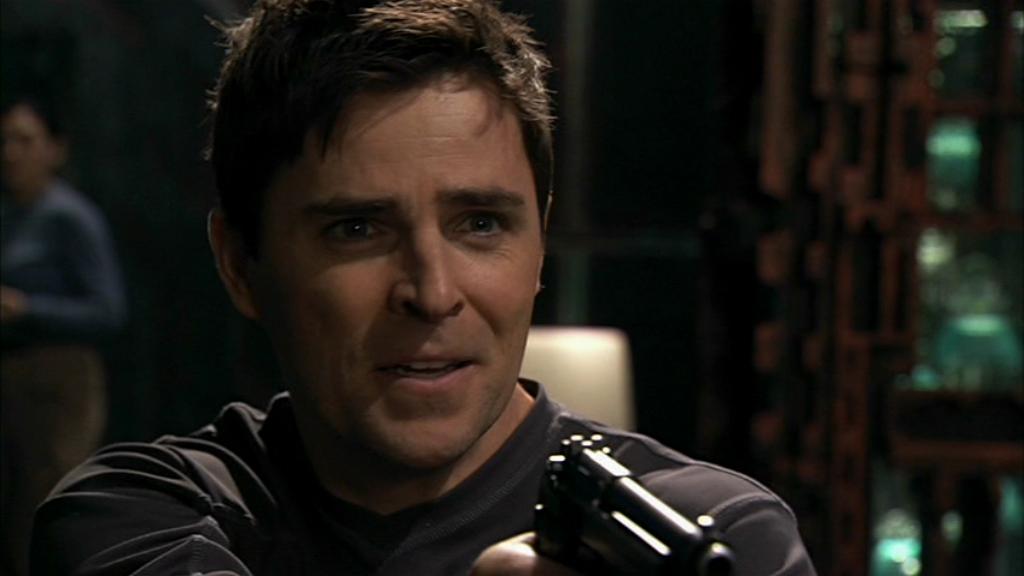 Major in the U.S. Air Force, assigned as executive officer to Colonel Edwards at the naquadah dig site on P3X-403. Lorne was later transferred to the Atlantis expedition in the Pegasus Galaxy, where he became an important member of the security team.

Major Lorne is an accomplished pilot of F-302 fighters and Puddle Jumpers and was made a squadron leader. He was given command of the Orion when it was sent, along with the Daedalus, to stop the Wraith from reaching Earth.

In his spare time he enjoys painting, a skill passed on to him by his art teacher mother.

Lorne's first initial is E ("The Last Man"). (Note: Fans have dubbed Lorne's first name "Evan," though this has not been established in canon.)

Enemy Mine - SG-1 finds Lorne and his team on P3X-403, where they have recently discovered a significant deposit of the valuable mineral naquadah.
Runner - Major Lorne joins the hunt for Aiden Ford on P3M-736 after he and a biologist discover a Wraith corpse there.
The Hive - Lorne and McKay pilot a Puddle Jumper into the range of two hive ships to contact Colonel Sheppard, but they are unable to reach him.
Coup D'etat - Lorne's team is believed dead after charred bodies are discovered off-world, but in truth they have been caught up in a Genii coup plot.
No Man's Land - Given command of the Ancient warship Orion, Lorne takes part in a desperate fight to stop the Wraith reaching Earth.
The Game - Lorne reports some interesting findings on M4D-058 and later gets into trouble when he and Zelenka are caught operating the console.
Sunday - Dr. Beckett finds Lorne painting on his day off.
Tabula Rasa - His memory lost, Lorne heads a security team that is rounding up the Atlantis expedition members, convinced the illness is a biological attack on the city.
Quarantine - Like everybody else on Atlantis, Lorne is trapped when a computer malfunction causes a quarantine lockdown of the entire city.
The Last Man - Rodney McKay has a meeting with General Lorne, the commander of the S.G.C., in the future of an alternate timeline.
Search and Rescue - Lorne has his leg broken and is trapped with Rodney McKay in the wreckage of a collapsed building.
Inquisition - After Sheppard and his team go missing on a diplomatic mission, Lorne brings Myrus back to Atlantis for a meeting with Woolsey.
Enemy at the Gate - Lorne and his team are sent to collect Z.P.M.s from an address supplied by Todd. Later he joins a team sent through the Stargate to sabotage the Wraith super-hive ship.