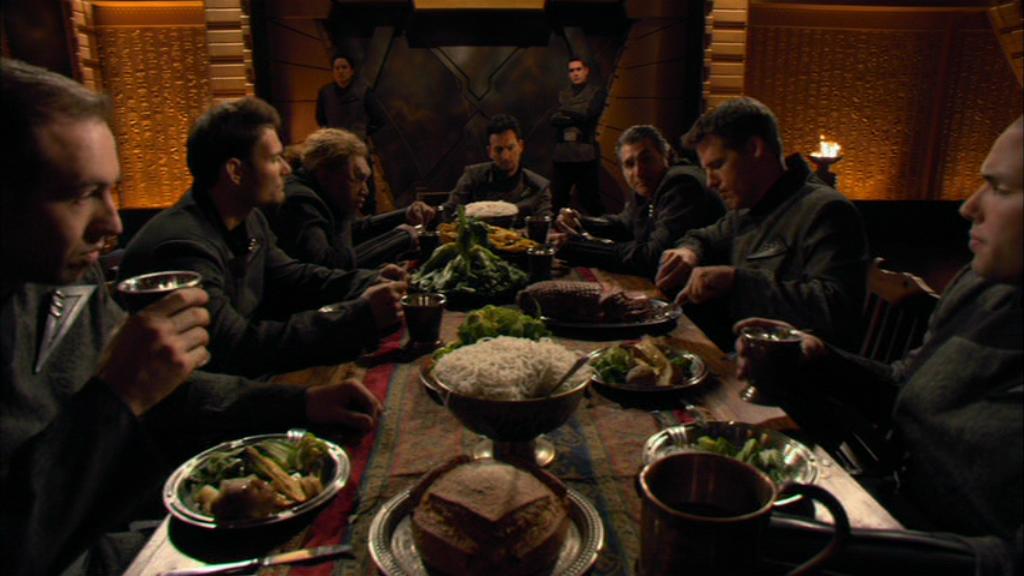 A shady, yet powerful consortium of smugglers and mercenaries that merged together to take advantage of the power vacuum left behind by the Goa'uld following their defeat by the Replicators. Their fleet consists of at least nine Al'kesh, two small cruisers, and a death glider defense force, and has been growing in strength and technological advancement.

The Alliance is made up of a committed band of individuals who are not afraid to get what they want by force, though most arrangements are carried out through trade with a loose list of alliances. They typically will not trade with anyone they do not know, but if the bounty is worth spreading themselves, they will trade with unknowns to obtain what they want.

On the worlds they control they act like warlords, burning crops and forcing villagers to eat only the food they provide. They also control what the teachers teach, and put guns in the hands of children to indoctrinate them at an early age.

There is no indication of exactly when the Alliance was formed, but it likely came together following the fall of Anubis and his fleet -- though it may have been developing before this time. The Alliance scientist Ginn intimated that the organization's history may go back 12 to 13 years prior to her arrival on board Destiny.

Kiva leads a Lucian Alliance incursion on board Destiny. From "Incursion, Part 2"

Vala Mal Doran once attempted to trade the Earth ship Prometheus to the Lucian Alliance in exchange for a case of weapons-grade naquadah, but two Alliance associates, Tenat and Jup, were duped by Daniel Jackson (who had locked Vala in a cell, preventing her from making the trade). Consequently Vala and Jackson were placed on a wanted list by the Alliance.

The Lucian Alliance has the potential to become a growing threat, particularly for the new Jaffa government. They have visited Earth using a cloaked cargo ship, and even brainwashed Colonel David Telford, a U.S. Air Force deep-cover operative they found spying in their midst, using him to serve their own ends. They have also set their sites outside our galaxy, with Commander Kiva leading an invasion force to seize control of the Ancient exploratory vessel Destiny. When the incursion was suppressed, a handful of their membership was allowed to stay on board the ship -- including Varro, Ginn, Simeon, and Koz -- while the rest of the invasion force was left behind to fend for themselves on an uninhabited planet.

Prometheus Unbound - Vala attempts to trade the Prometheus to two associates of the Lucian Alliance, but Daniel spoils the deal when he retakes the ship.
The Ties That Bind - The Lucian Alliance instructs Tenat and Jup to recover Vala and Daniel, likely to make examples of them.
Off the Grid - The Alliance captures SG-1 when the team tries to stop the flow of the addictive kassa crop.
Camelot - Teal'c seeks out the Lucian Alliance for help in the battle against the Ori, and convinces Netan to commit three ships.
Flesh and Blood - Discredited by the defeat of his ships at the hands of the Ori, Netan captures Teal'c and tortures him.
Company of Thieves - Netan fights to hold on to his increasingly tenuous leadership when one of his rivals succeeds in capturing the Odyssey. Colonel Mitchell poses as a reclusive member of the Lucian Alliance.
Air, Part 1 - When a fleet of Ha'taks, death gliders and a Goa'uld troop transport attack Earth's secret Icarus Base, the team speculates that it is likely the Lucian Alliance.
Human - In Dr. Rush's memory of his past, Daniel Jackson informs him that an Earth source inside the Alliance has provided the location of a planet that will suit the power requirements of the Ninth Chevron Project -- likely the Icarus-type planet.
Subversion - Dr. Rush and Colonel Young learn that Colonel David Telford -- once a spy for Earth inside the Alliance -- traded sides and is now spying for them.
Incursion, Part 1 - Kiva leads a group of soldiers to infiltrate Destiny through the Stargate.
Incursion, Part 2 - After Kiva is shot, one of her officers takes control of the invasion and moves to execute Colonel Young and the military personnel.
Intervention - The Alliance takeover of Destiny fails when Dr. Rush threatens to expose them all to deadly radiation, and one of their own kills the insane Dannic.
Aftermath - A handful of Alliance survivors are allowed to remain on Destiny, but the rest of the incursion survivors are left behind on an alien planet.
Awakening - Varro pleads for Colonel Young to let his people out and give them a chance to prove their trustworthiness, but he suggests that may not be possible.
Pathogen - Varro and his people are let out into the Destiny's general population, but Simeon finds it harder to play nice.
Malice - After Simeon murders both Ginn and Dr. Perry while Ginn is allegedly sharing Alliance secrets with Earth, he escapes the ship and is hunted down on a desert planet and killed.
Alliances - The Alliance attacks Earth directly, crashing a naquadria bomb on board a cargo ship into Homeworld Command.
Seizure - Suspecting the Alliance is working to subvert Earth's alliance with Langara, Young and Telford act to use their Stargate to reach Destiny -- but Richard Woolsey learns the Langarans have steadfastly refused the Lucians.