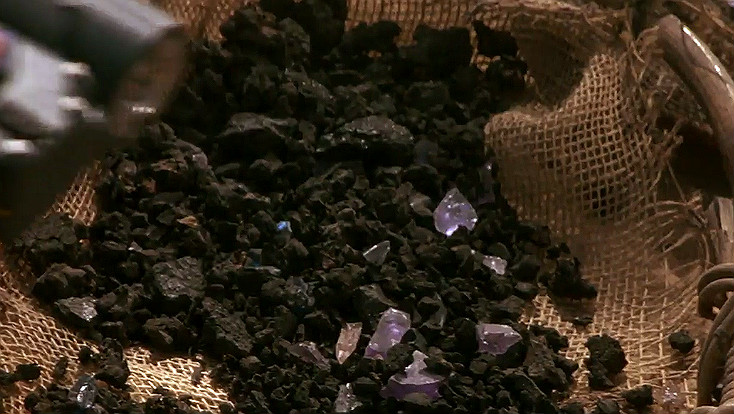 The mineral also has highly explosive properties, making it useful for enhancing the yield of bombs, missiles, and the like. It has at least two variants: liquid naquadah, used to power Jaffa staff weapons, and naquadria, which is more volatile and powerful. Naquadah is rather rare, and does not exist naturally in Earth's solar system.

Naquadah is also a part of the Goa'uld's genetic make-up. Its presence gives them (as well as someone who has had a symbiote die inside of them, such as Samantha Carter) the ability to use Goa'uld technology such as a hand device or healing device, and to sense the presence of other Goa'uld within a range of a few feet.

Many of the people who live on Goa'uld controlled worlds, such as Abydos, were put there by the Goa'uld to work as forced labor in naquadah mines.

"Stargate" the Movie - The team from Earth discovers the Abydonians mining naquadah for Ra, and find that it is the building block for all of the Goa'uld's technology.
The Serpent's Lair - Earth launches a pair of missiles with naquadah-enhanced warheads -- nicknamed "Goa'uld-busters" -- at Apophis's motherships.
Learning Curve - Earth is given naquadah reactor technology by the Orbanians.
A Hundred Days - SG-1 negotiates a treaty with the people of Eudora, whose planet is rich in naquadah.
Chain Reaction - Temporarily put in command of the SGC, Major General Bauer causes a near catastrophe by detonating an explosive on a planet rich in naquadah, causing an explosive chain reaction that annihilates a world.
Fail Safe - SG-1 stops a naquadah-rich (and thus very dangerous) asteroid from impacting with Earth, and conclude it was set on course by Anubis.
Meridian - SG-1 discovers the existence of naquadria, a more powerful variant of naquadah, on the planet Langara (Kelowna). Jonas Quinn brings them a small supply when defecting to Earth.
Enemy Mine - An Earth survey team commanded by Colonel Edwards locate a rich naquadah deposit on P3X-403, and eventually the local Unas agree to mine it for them. The mineral is to be used to construct new ships for Earth.
It's Good To Be King - Maybourne reports that Arkhan's planet has naquadah mines, which its people were once forced to work.