From The Stargate Omnipedia
Revision as of 00:43, 27 April 2018 by GateWorld (talk | contribs) (Created page with "File:Pierce2.jpg Colonel in the U.S. Air Force and commander of SG-15, who has been involved in a number of important incidents off-world. When he was a Major Pierce...")
(diff) ← Older revision | Latest revision (diff) | Newer revision → (diff) 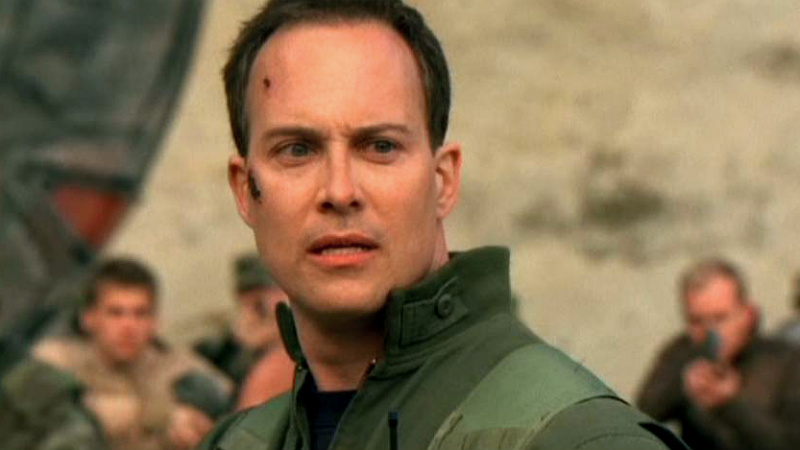 Colonel in the U.S. Air Force and commander of SG-15, who has been involved in a number of important incidents off-world. When he was a Major Pierce was ordered to P3X-888 when Daniel Jackson was captured by the Unas, Chaka.

A year later Pierce was ordered to investigate the possibility that the Aschen homeworld was, in fact, a planet General Hammond had ordered locked out of the dialing computer due to a warning from the future. But the President himself called off Pierce's mission for fear of upsetting the Aschen while negotiations were commencing.

Pierce was also present at Earth's Alpha Site when a group of Jaffa and Tok'ra refugees had a philosophical clash, exacerbated by an invisible ashrak assassin in their midst. Pierce went on patrol with Teal'c and Bra'tac in the area around the base in an attempt to hunt down the killer.

Pierce was shot in the back under the dominion of the Goa'uld underlord Mot while attempting to hold the Stargate. But he survived and was eventually promoted to Colonel, now assigned to take charge of the new Alpha Site -- built inside a mountain face on another planet. His base provided an important backup site for S.G.C. personnel.

PLAYED BY - Rob Lee
FIRST APPEARED - The First Ones

The First Ones - Pierce is ordered to P3X-888 while Dr. Daniel Jackson is missing.
2001 - Pierce and his team is ordered to investigate possible coordinates to the Aschen homeworld, but their mission is scrubbed at the last moment in the interests of maintaining peace with the Aschen.
Allegiance - Pierce arrives from the Risa System to the Alpha Site.
Forsaken - Major Pierce guards the Stargate while SG-1 investigates a crew of a downed starship.
Prophecy - Pierce is shot in the back while defending the Stargate, but survives.
Endgame - Pierce, now a Colonel, is stationed at Earth's Alpha Site.