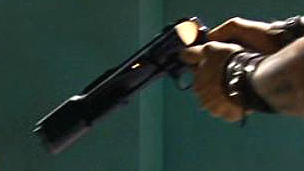 Weapon wielded by Ronon Dex. Little is known about this weapon, but it is apparently not Satedan in origin. The Travelers also possess the same weapons technology, indicating that Ronon may have encountered them during his years as a Runner and taken (or was given) it.

Rather than bullets, the device emits great red bursts of energy. It has two settings, stun and kill.

Runner - Dex wields an advanced pistol on his pursuers, including several members of the Atlantis expedition.
Travelers - Captured by the Travelers, Colonel Sheppard observes that their hand weapons are just like the gun that Ronon carries.