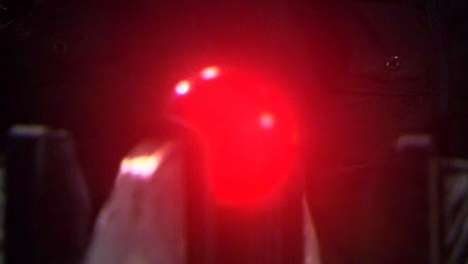 The so-called "Holy Grail," a sacred stone the color of blood, believed to contain great powers. It has also been called the "Bloodstone" and the "Holy Grail." The Ancient scientist Merlin wore it around his neck. King Arthur and his knights departed Camelot in search of the Sangraal, and quested for it in three locations: Castiana, Sahal, and Vagonbrei.

After pursuing the mythical treasure for many months SG-1 discovered it to be a key component in Merlin's anti-Ori weapon. Appearing like a large, red, multi-faceted jewel, the Sangraal is inserted at the top of the device at the final stage of its construction, making it ready to be activated.

Camelot - Kvasir theorizes about how Merlin's weapon works, while SG-1 gains a vital new clue about where to find it.
The Quest, Part 1 - SG-1 discovers the planet where Merlin likely hid the Sangraal, but must get past a series of obstacles set by Morgan Le Fay before they can reach it.
The Quest, Part 2 - Concluding the Morgan likely destroyed the original Sangraal, Merlin helps Daniel Jackson use Ancient technology to create a new one molecule by molecule.
The Shroud - Vala and Mitchell insert the new Sangraal into Merlin's weapon, allowing it to be activated and deployed to the Ori's home galaxy.