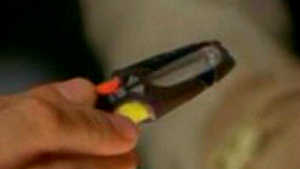 Tok'ra formula comprised of two fluids encased in a small vile. A holder combines the two by pressing a button on the side. Within seconds a build-up of pressure breaks the seal and the liquids become a deadly gas, capable of destroying an entire base of Tok'ra operatives twice over. The symbiote poison was a formula concocted by Tok'ra scientists, including Ren'al, who worked on a means of eradicating the Goa'uld once and for all.

The poison is only fatal to symbiotes, and leaves humans unharmed. However, dying symbiotes release their own toxins into the host bloodstream, which makes the poison useless in saving hosts from their Goa'uld captors.

A human-made version of the of the symbiote poison, from "Endgame"

Synthesizing a small vile of the poison takes weeks. The formula is stored on a transparent data crystal, saved by Major Carter following the aftermath of a Goa'uld attack on Revanna.

Several years later a rogue N.I.D. unit known as The Trust managed to acquire this crystal's formula for the poison, and began targeting worlds under Goa'uld domain. SG-1 eventually stopped them, but not before several planets were attacked and all the Jaffa and Goa'uld that lived on them killed.

The Jaffa are the chief reason the symbiote poison has not been used more often. Since they are innocent slaves it is morally ambiguous to sentence them to a painful death, no matter what their beliefs may be.

Summit - Ren'al gives Daniel Jackson the symbiote poison in the hopes of using it against the Goa'uld System Lords as they convene at a summit in the Hasara System.
Last Stand - Daniel delivers the poison to Elliot/Lantash who hope to use it to destroy Zipacna's forces, and hopefully Zipacna himself.
Endgame - The trust develops large quantities of the symbiote poison to take on the Goa'uld themselves.
Dominion - Baal eliminates his clones by calling them to a meeting, and then releasing symbiote poison into the atmosphere.