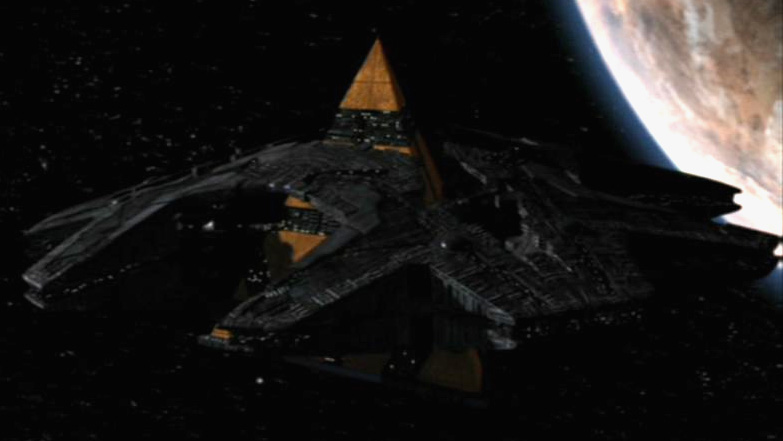 A Goa'uld mothership, tetrahedral in shape. Ha'taks facilitate the transport of Goa'uld and their Jaffa armies. They are significant forces in attacking worlds from space, capable of atmospheric flight and landing on a planet's surface. (Typically, pyramids are utilized as landing platforms.)

The Ha'tak is armed with powerful energy weapons, shields, ring transporters, and are capable of launching entire squadrons of death gliders. It utilizes crystal-based technology for ship's functions, and is built around a centralized engine room and a command bridge (called the Pel'tac).

After the defeat of the Goa'uld System Lords several Ha'tak vessels fell into the hands of other powers, most notably the multi-species Lucian Alliance.

Within the Serpent's Grasp - SG-1 gates to the coordinates Dr. Jackson gathered in an alternate reality, soon realizing that the gate is aboard a new class of Ha'tak bound for Earth.
The Serpent's Lair - The Earth's destruction just hours away, SG-1 and a small band of rebel Jaffa are the planet's only hope in destroying two of Apophis's motherships in orbit.
The Tok'ra, Part 2 - Having recieved information from a spy, the System Lords send Ha'taks to wipe out the Tok'ra.
Double Jeopardy - SG-1 seizes Cronus' mothership after the powerful System Lord is killed.
Exodus - Having obtained Cronus' Ha'tak in battle, SG-1 loans the vessel to the Tok'ra as they move from Vorash to Revanna.
Enemies - Trapped in an unknown galaxy, SG-1 and Jacob must face off in Cronus' Ha'tak against Apophis's powerful new mothership.
Revelations - A fleet of advanced Asgard motherships is the only thing stopping Anubis's Ha'taks from wiping out a cargo ship carrying SG-1 and the Asgard Supreme Commander.
Descent - Osiris' Ha'tak mysteriously appears in Earth's orbit, abandoned -- but when SG-1 tries to salvage the ship, they become trapped on board when it crashes into the Pacific Ocean.
Full Circle - Anubis, determined to prove his authority as supreme Goa'uld, uses a powerful new weapon to wipe out a fleet of System Lord Ha'taks.
Lost City, Part 1 - A Goa'uld Ha'tak arrives in orbit of P3X-439, launching several Death Gliders to join the Al'kesh entering the planets atmosphere.
Lost City, Part 2 - More than 30 Ha'taks exit hyperspace and surround Earth as Anubis poises his forces to attack.
It's Good To Be King - Jack O'Neill pilots a Puddle Jumper and destroys the Goa'uld Ares' mothership with a single volley of drone weapons, saving Arkhan's planet from enslavement.
Stronghold - Baal establishes a base within his Ha'tak on a barren planet, kidnapping members of the Jaffa High Council and brainwashing them.
Air, Part 1 - The Lucian Alliance attacks the Icarus Base led by several Ha'taks and squadrons of Death Gliders.