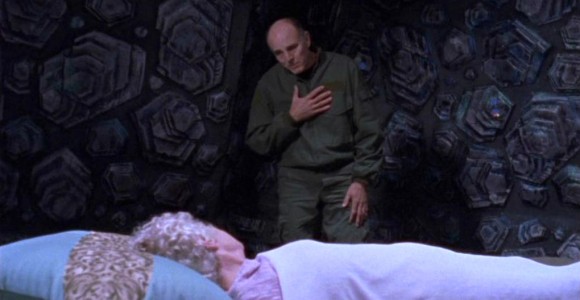 While SG-1 tries to form an alliance with the Tok'ra, a spy betrays the rebels to the Goa'uld. Jacob Carter finds that the Tok'ra may be his only hope of survival.

SG-1 and SG-3 remain prisoners of the Tok'ra, who have refused an alliance and now hold the teams because of the security risk they pose. Once the Tok'ra move on to a new planet, the teams may be released.

But when Captain Carter learns that the Goa'uld / Tok'ra symbiote has the ability to cure cancer, she comes up with a way out – and a way to save her ailing father's life. Garshaw, leader of the Tok'ra, allows her and O'Neill to return to Earth. They visit Sam's father, Jacob Carter, who lies in a hospital bed dying of cancer. If he is willing to be blended with the Tok'ra Selmak – whose host is about to die – his life may be saved, and an alliance between the Tok'ra and Earth may be possible.

Jacob is pleased to finally be told about what his daughter does for a living. She isn't a "satellite geek," but is off exploring worlds that NASA astronauts will never dream of. He agrees to go with them to the Tok'ra base, believing that any price he has to pay is better than dying of cancer.

O'Neill, Carter and her father return through the Stargate, and find that the SG teams are no longer prisoners. The Tok'ra are evacuating, having learned from their operatives that the Goa'uld have been alerted to their location, and are on their way. The System Lords will arrive in force in a day – or perhaps, a few hours.

While SG-1 and SG-3 help with the evacuation of their hopeful allies, Carter and Martouf introduce Jacob to Selmak, whose human host, Saroosh, is soon to die of old age. (Tok'ra do not use a Goa'uld sarcophagus, because they believe it robs one of his or her soul.) Without a new host, Selmak will die as well. She and Jacob begin to get to know one another's personalities and senses of humor, and finally agree to the blending.

Colonel O'Neill has a guess as to how the Tok'ra's hidden location was discovered. He saw one of the Goa'uld leaders, Cordesh, with a long-range communications device. He questions Garshaw about it, and is told that the Tok'ra do not use them at all. Infuriated, Garshaw moves to find Cordesh.

And find him she does. He is standing in a corridor, in front of a crystal tunnel that is collapsing. Just as the Tok'ra grow underground tunnels when they arrive on a planet, so also do they collapse the tunnels to mask their trails when they leave. Cordesh tells them that he is not who he appears to be, and that he could not stop his symbiote from betraying the Tok'ra. He allows himself to be crushed by the collapsing tunnel, and is killed.

Later, O'Neill sees a young Tok'ra woman carrying a box just like the one where Cordesh stored his communications device. He grabs her, and shows it to Garshaw. Cordesh, in fact, had abandoned his host and entered another to make his escape. Garshaw orders the Tok'ra to try and remove him from the girl without harming her, then to leave Cordesh in one of the vanishing tunnels.

Selmak leaps from Saroosh into Jacob, through his mouth. Martouf and Sam must wait to see if the blending is still possible at all. Selmak is weak, and Jacob's cancer may be too far gone for her to heal. As the Goa'uld attack begins, the last of the Tok'ra leave through the Stargate – but Jacob must remain stationery, or he will surely die.

O'Neill and Garshaw agree to allow Martouf and Sam to stay behind with him, as Martouf promises that they will not let themselves be taken captive by the Goa'uld. If Jacob does not recover – or if he does not recover in time – they will allow the last remaining caverns to collapse on them.

The rest of SG-1 escort Garshaw to the Stargate, and barely escape to Earth as Goa'uld death gliders fire upon them. Jacob recovers, and his blending is a success. Carter, Martouf and Jacob escape through the Stargate.

Jacob volunteers to be the liaison between the Tok'ra and Earth, having learned from Selmak that the Tok'ra are good people. Martouf, Jacob and Garshaw must leave immediately, though: Cordesh may have betrayed their new homeworld to the Goa'uld, so they must quickly move the Tok'ra to yet another planet.