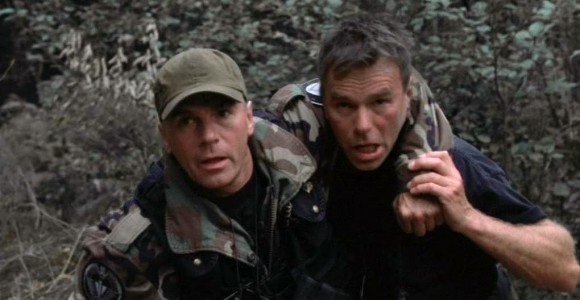 SG-1 joins forces with their robot doubles to rescue an alien world from the Goa'uld Cronus, while Teal'c seeks revenge for the murder of his father.

SG-1 arrives on the planet Juna and immediately comes under attack from a group of Jaffa and local Juna warriors. One of the local leaders, a young man named Darian, recognizes them. He knows all their names, and tells the Jaffa that these are the ones who led them in a rebellion against Heru'ur, banishing the Goa'uld's servants from their world.

The team has no memory of these events. Samantha Carter, Daniel Jackson and Teal'c are imprisoned, but Jack O'Neill manages to escape. He captures one of the Juna warriors, and steals his uniform.

The team is led into a large pyramid as a Goa'uld mothership enters orbit, and forced to their knees as the powerful System Lord Cronus transports to the surface. He recognizes them, of course, but reminds them that the treaty between the Goa'uld and the Asgard protects the planet Earth – but not S.G. teams who are found offworld. He will show them no mercy.

Jack enters the room disguised as a Juna warrior, and watches in silence as Cronus orders Darian to kill Daniel. Though Daniel sees Colonel O'Neill watching, he shakes his head – telling him not to reveal himself and attempt a rescue. Cronus shouts at Darian, who fires the staff weapon. Daniel's head flies off, and his body falls limp to the ground.

The local warriors, the Jaffa – even Cronus himself – are shocked at what they see. Daniel is not even human. He is an android.

Back on Earth, the real SG-1 watches as a signal is received through the Stargate. It is a single word sent on the I.D.C. frequency: "Comtrya." They recognize it as the greeting used by Harlan, an artificial lifeform from PX3-989 ("Tin Man"). General Hammond orders the iris opened, and Harlan arrives.

He tells them that SG-1's robot duplicates did not bury the Stargate on their world, as they had agreed to do. Instead, they have been going on missions to other worlds, fighting the Goa'uld and exploring the galaxy. But now they are 16 hours overdue, and will run out of energy in just 8 hours.

The team refuses to go after their duplicates, until they learn that the world they went to is Juna (P3X-729) – a planet formerly under the control of Heru'ur, which SG-1 helped to liberate. A probe is sent through just in time to catch Colonel O'Neill's double fighting off a group of Jaffa. Darian joins him, having realized that Cronus is not a god.

Cronus has taken over the planet, and the real SG-1 has an obligation to help (though Daniel is already off-world on another mission). When they arrive, the two O'Neill's are less than happy to see each other. O'Neill blames the android for lying to him and leaving their planet; the duplicate blames O'Neill for having left the people of Juna ripe for Goa'uld picking.

But with no time to argue, the team infiltrates Cronus' mothership. Meanwhile, Cronus is fascinated with the android versions of Teal'c and Carter. He orders them studied by his scientist, a Goa'uld named Ja'din, so that he might benefit from the advanced technology. The two refuse to cooperate with her, even under torture.

The android Teal'c requests an audience with Cronus, to bargain for Carter's life. Intrigued, the Goa'uld accepts, though he knows that the Jaffa has a blood oath to get his revenge for the murder of Teal'c's father ("Fair Game," "Crossroads"). It is a mistake; the super-strong and fast android Teal'c overpowers the Jaffa guards and grabs Cronus.

Carter's robot duplicate manages to escape, and meets up with the real team. The real Teal'c goes to look for Cronus on the command level, and Carter's double helps Carter and O'Neill to lock down the ship. It costs the android her life, though: after reaching through a force shield to shut down all the compartment doors, she collapses.

Cronus overpowers both Teal'c's, and turns to kill the real Jaffa in the same way he killed his father years ago. He reaches into Teal'c's symbiote pouch, and begins to slowly crush the larval Goa'uld within. But Teal'c's robot double has not been completely disabled. He shoots the System Lord in the back with a staff weapon several times, and Cronus falls dead.

"For our father," Teal'c's double says to him. He collapses, apparently dead himself.

The team has eliminated one of the galaxy's dominant System Lords, seized control of his ship, and saved the planet of Juna again. Jack tells Darian to spread the word to his people – if they don't believe that their "god" has been killed, they can come and see for themselves. But as the team reassembles on the surface below, Jack's robot double also succumbs to his battle wounds and failing power supply, and dies.