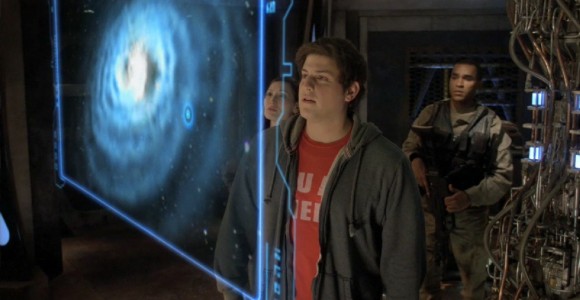 When a research team is forced to evacuate their secret base, they find themselves on board a derelict Ancient vessel that is many galaxies away from Earth.

The ship's engines throttle back. Lights illuminate dark corridors. The on-board Stargate spins to life. Its kawoosh billows into the Gate Room. Lt. Matthew Scott follows, landing hard on the floor. He stumbles to his feet but before he can get his bearings, a metal case and a woman fly out of the event horizon. More people, boxes and cases are violently ejected, creating chaos in front of the active Stargate. Scott radios back through the gate, ordering them to slow down the evacuation. But civilians and soldiers continue pouring through.

Dr. Nicholas Rush, less disoriented than most, immediately examines a nearby console before climbing to a balcony overlooking the turmoil. Looking down on the scene, he smiles ever so slightly. As people sort themselves out, Scott approaches MSgt. Ronald Greer. Scott asks about their commanding officer, Colonel Everett Young. Everyone is startled when Young is hurled from the Stargate and across the room.

The Stargate shuts down, plunging the Gate Room into darkness. Flashlights allow Scott to locate Colonel Young, who has a bleeding head injury. Young transfers command to Scott before falling unconscious. After summoning Lt. Tamara Johansen, their only medic, Scott orders Greer to try and keep everyone calm. Unsure of where they are, unable to locate Dr. Rush, Scott and a wide-eyed civilian named Eli Wallace start off to assess their situation.

The ship's engines suddenly power up.

The two men locate Rush on an observation deck, bemused because they are traveling at faster-than-light speed – but not through hyperspace, the means of interstellar travel which is familiar to Earth's Stargate Command. Rush concludes that the ship, of Ancient design, is several hundred thousand years old. And when an air vent in the Gate Room shuts down, Rush realizes that life support is failing.

Scott returns to the Gate Room in search of scientists to help Rush work on the life support system. A number of people, including Senator Alan Armstrong, demand to dial Earth. His agitation brings on a possible heart attack. Johansen does her best to help him, Young, and the other injured.

When Scott, Greer and the scientists reach the Control Room, they find Eli and Rush arguing. Greer, worried that Rush will worsen their situation, immediately sides with Eli and raises his weapon, ordering Dr. Rush not to press a button on his console. Eli is convinced that the man has no idea what he is doing. Scott quickly derails the confrontation, convincing Sgt. Greer to lower his gun. Rush pushes the button, believing it might reset the life support system. But nothing happens – that would have been too easy.

The group next discovers a visual log of the Ancient ship's journey. Originating in the Milky Way, it has traveled through the Pegasus Galaxy and many others – dozens of galaxies, at least. Rush estimates they are currently "several billion light years" from Earth.

Returning to the Gate Room, Scott organizes the able-bodied into search teams. As he speaks to the assembly of frustrated civilians, Rush opens the bag Young brought with him through the Stargate. When the teams move out, Rush quietly picks up the carry-all and leaves.

Meanwhile, Colonel Samantha Carter contacts Lt. General Jack O'Neill at the Pentagon from her command on the U.S.S. George Hammond. Just hours earlier the Hammond ferried Dr. Rush, Eli, Senator Armstrong, and his daughter and aide Chloe from Earth to Icarus Base – an Earth outpost on planet with a unique core. For two years Icarus has been home to the ninth chevron project, into which Rush has poured his life.

Eli Wallace was recruited to help Dr. Rush solve a key power allocation problem to dial the first and only 9-chevron Stargate address, discovered in the Ancient database in Atlantis. A brilliant young man with few prospects, Eli used to spend his time playing video games in his mother's basement. He solved the "Dakara weapons puzzle" on the video game Prometheus – planted by the U.S. military to find brilliant young minds. Rush and General O'Neill visited him at his home, but when he proved skeptical he was beamed aboard the Hammond against his will, and introduced to a vast new world of Stargates and space travel. His mathematical solution to the video game's puzzle should have supplied the Stargate with the precise amount of energy necessary to activate the ninth chevron.

Eli and Rush work on the problem, only to have the Colonel order a dinner break for the honored guests. During the meal the base came under a surprise attack by Goa'uld motherships, death gliders, even a troop transport attempting to take the Earth base by force. The Hammond and a squadron of F-302s (led by Icarus's Colonel Telford) defended the base while its people were evacuated through the Stargate.

But Dr. Rush didn't dial Earth. At the last minute, with new insight from Eli, they figured out how to properly dial the 9-chevron address. Angry when he learns what Rush has done, Young is forced to proceed with the evacuation, even though no one knows where it leads. He sends Lt. Scott through first to scout the mystery destination. As civilian and military personnel flee the collapsing base, they take mission supplies with them.

Many are killed in the attack, including the base's chief medical officer, Dr. Simms. Young is the last to escape, flung through the Stargate by an explosive shockwave. Due to its unstable core the planet blows up, destroying the attackers in a massive shockwave.

Surmising they were attacked by the Lucian Alliance, Carter reports the loss of 12 people. Since the Icarus Stargate was active for six minutes, she presumes the more than 80 people unaccounted for are safe on Earth. But O'Neill informs her that they did not evacuate to Earth. No one knows where they have gone.