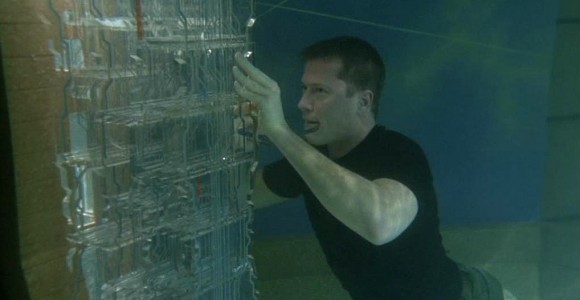 SG-1 boards an abandoned Goa'uld mothership that has mysteriously arrived in Earth's orbit, and must escape the doomed vessel when it crashes into the ocean.

SG-1 heads toward the planet Earth, on board a cargo ship with the Tok'ra Jacob Carter, Major Davis, and a scientist named Dr. Friesen. They're on their way to investigate a Goa'uld mothership, which has arrived in Earth's orbit – but has made no aggressive moves.

They quickly find out why: Jacob scans the ship, and finds no life signs. They board the ship, but O'Neill orders new team member Jonas Quinn to stay on the cargo ship with Teal'c. Quinn is anxious to contribute to the team and prove himself, but Teal'c reassures him that it will simply take time for the Colonel to come to trust his abilities.

On board, the team discovers that the ship is, in fact, deserted – and its self-destruct countdown is inexplicably stuck mid-way through the countdown. The engines are functional, though, and O'Neill intends to salvage the ship. Jacob, of course, urges caution. They also hear a strange static over the ship's intercom system, repeating every few minutes.

Carter and Davis investigate the computer core, and make a discovery: the ship belongs to Anubis, and is the very same ship that defeated an Asgard battleship and captured Thor ("Revelations"). Anubis implanted an advanced alien device into Thor's brain in order to download his knowledge; though the team rescued the Asgard, he has no brain activity and isn't expected to come out of his coma.

The team theorizes that when he had access to the ship's computer system, Thor may have left behind a powerful computer virus that eventually forced Anubis to abandon ship – and sent it to Earth, as a sort of gift.

Dr. Friesen asks Colonel O'Neill for a chance to look at the shield generator, as Anubis's shield technology is more advanced than anything they've ever seen. O'Neill refuses, but Friesen soon makes his way to the generator on his own. He finds three of Anubis Jaffa still on board, martial arts warriors, who kill him.

O'Neill finds Friesen's body, and warns the rest of the team – but it is too late. The Jaffa arrive on the pel'tac level and shoot Jacob with a staff weapon, then begin the ship's rapid descent into the planet's atmosphere. The Jaffa use the ring transporter to get to the cargo ship, where Teal'c (after saving Jonas's life) quickly disposes of them with a zat gun.

The fight disables the crystals that control the ship's transport rings, though, leaving the rest of the team stranded on the mothership. With insufficient time to dock the cargo ship and affect a rescue, they fall to Earth and crash into the northern Pacific Ocean.

Teal'c and Jonas return to Earth, where General Hammond gives them permission to join the rescue operation. The ship survived the crash intact, and a deep-sea rescue submarine has been dispatched.

On board the mothership, Jacob reports that his Tok'ra symbiote is healing his injuries – but he has a broken collar bone. O'Neill and Carter head back to the computer core to try and find some answers, but are trapped in a corridor when the ship seals off the area to prevent flooding. The room quickly fills with water, and Jacob tries to open the doors remotely – but he cannot. The water reaches the ceiling, and Sam and Jack have no way out.

The door suddenly opens, and water floods out, saving their lives. Jacob has no explanation.

The submarine arrives and docks with the ship, and Jonas and Teal'c board. Before they escape, Major Carter insists that they stay long enough to figure out what is going on. She has a possible explanation for the frozen self-destruct countdown, for the fact that a Goa'uld mothership mysteriously arrived in their solar system, and for the fact that her and O'Neill's lives were saved.

Thor's consciousness is still inside the computer system. He didn't leave a virus – he left himself, and has been trying to communicate with them through the static message they've been hearing. They decipher the message, and it is Thor's voice. Carter believes that if they can salvage the crystals from the computer core, the Asgard can transfer Thor into a new clone body and save him.

Jacob, Davis and Quinn are ordered off the ship, while the rest of SG-1 retrieves Thor's consciousness. But when they head back toward the sub, their only exit is blocked: another passage has been sealed as the ship continues to flood. And now that Thor is no longer in control, the self-destruct has begun again – only minutes remain.

Jack orders the others to take the sub to a safe distance, while he, Sam and Teal'c try to access the glider bay. But Sam cannot activate the force shield that will protect the bay and enable them to fly out, and the clock is ticking.

Jonas tells the others to board the sub and leave without him. He hurries down the corridor to a junction where he believes he can reroute power to Major Carter's panel; he's studied the specs on the mothership a dozen times, and knows it inside and out. He reaches the flooded compartment and swims underwater, holding his breath as he transfers the power. The plan works, and the team is able to safely access the glider bay.

Jonas swims to a nearby ring transporter, and transports himself – water and all – to another deck. He runs to the glider bay in time to join the others. The ships survive the dangerous flight through the deep sea, shooting up into the sky as the ship explodes deep beneath the surface.