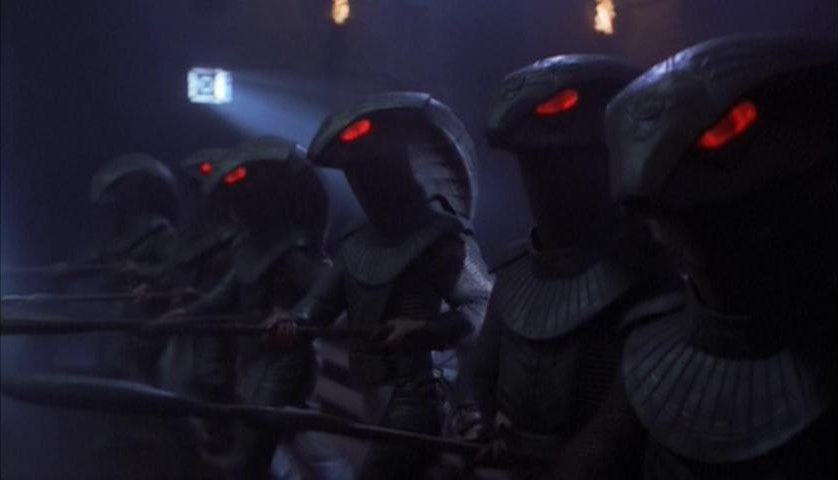 Slaves of the Goa'uld, the Jaffa are humans from many different worlds, most of whom have been implanted with larval Goa'uld symbiotes. Jaffa have a great sense of honor and nobility backing their oppressed history. Due to their oppression by the Goa'uld, many have become strong and self-sufficient on the battlefield.

Though they are not especially superstitious, Jaffa are governed by strong religious beliefs. All believe in some form of afterlife. Goa'uld-serving Jaffa believe they will be greatly honored for their deeds in the afterlife. Rebel Jaffa believe their souls will be sent to Kheb, far beyond Goa'uld oppression, where their kalach (souls) will live without the prim'tah.

At the time of implantation (typically around 10 years of age), the Jaffa who are "honored" enough and possess a sufficient community status are granted the ceremony of the prim'tah, when the Goa'uld symbiote is implanted within a young warrior, granting him great strength and long life. Because of their genetic manipulation by the Goa'uld, Jaffa are forced to receive a symbiote upon reaching the Age of Prata (puberty), or die from a failing immune system. Without a symbiote, an adult Jaffa cannot survive more than a few hours.

When the Jaffa Teal'c betrayed his master Apophis and became shol'vah, many Jaffa began to question their beliefs that the Goa'uld were gods. Many were severely punished for going against the Goa'uld, but many survived to continue to bring others to the rebel cause -- the Jaffa resistance, and the Hak'tyl resistance

As the years passed, more Goa'uld were slain and more Jaffa began to recognize that their masters were nothing more than manipulative parasites. The introduction of a symbiote-based chemical called tretonin, later re-engineered without the need for symbiotes, proved that the Jaffa could survive in the absence of their oppressive masters.

The final blow was an all-out war between the Replicators and the Goa'uld, which devastated the Goa'uld dynasty. The Jaffa resistance took the opportunity to retake the temple at Dakara, a holy site where their enslavement began. Without the Goa'uld, the Jaffa were faced with the prospect of freedom for the first time in their existence, and recognized that without government peace would be short-lived. Thus the Jaffa High Council was elected.

Despite meddling from the Goa'uld Baal, who managed to survive on Earth following the defeat of his race, and the destruction of the Dakara temple by the Ori, the Jaffa have become a thriving free society of men and women who may pursue a lifestyle away from the drums of war.

"Stargate" the Movie - On Abydos, the first Stargate team encounters powerful Jaffa warriorrs in the service of Ra.
Children of the Gods - Teal'c abandons his position as First Prime to turn on his fellow Jaffa and join the Tau'ri in their fight against the Goa'uld.
Bloodlines - Extensive tests are performed on Teal'c symbiote, but Dr. Fraiser is unable to find a way to separate Teal'c from his dependency on his larval Goa'uld. Teal'c returns to Chulak to try and prevent his son from going through the Prim'tah.
Into the Fire - Teal'c returns to Chulak to gather an army of Jaffa against Hathor and other Goa'uld, but with no success.
Rules of Engagement - SG-1 discovers a military camp where Apophis's Jaffa were training humans to prepare to infiltrate Earth.
The Serpent's Venom - Teal'c returns to Chulak to meet with rebel Jaffa, who instead turn on him and take him to Heru'ur to be tortured.
The Warrior - Teal'c and Bra'tac learn of Kytano, the charismatic former First Prime of Imhotep, who has gathered a group of Jaffa who oppose the Goa'uld -- but who is really a Goa'uld in disguise. When Teal'c defeats Kytano -- who is really Imhotep himself -- he becomes a leader of the Jaffa Resistance.
Allegiance - Rebel Jaffa and Tok'ra refugees meet at Earth's Alpha Site, and manage to overcome some of the bad blood between them and unite against their common enemy.
The Changeling - The Goa'uld wipe out a large meeting of the leaders of the Jaffa Resistance, leaving only Teal'c and Bra'tac alive.
Reckoning, Part 1 - Free Jaffa band together to retake their holy land, Dakara, their biggest step in their freedom.
Reckoning, Part 2 - The Jaffa defend Dakara from Baal (under the command of Anubis) and the Replicators.
Threads - Victorious, the Jaffa make Dakara their home, with plans to expand throughout the galaxy.
Avalon, Part 2 - Gerak becomes the leader of the free Jaffa government.
The Fourth Horseman, Part 1 - To ensure the achievement of enlightenment Gerak attempts to lobby for all Jaffa to worship the Ori, and to legalize Origin as their only religion.
The Fourth Horseman, Part 2 - The Jaffa narrowly avert a civil war as the recently converted Gerak attempts to force Origin on the young nation.
Stronghold - The Jaffa High Council solidifies a referendum that will prevent any free Jaffa from bowing before false gods again.
Counterstrike - When a new Jaffa leader decides to defeat the Ori by wiping out their legions with the Dakara super-weapon, Adria takes her warship to the planet and destroys the temple.
Stargate: Continuum - A fleet of free Jaffa ships orbit the new Tok'ra homeworld to ensure that the last Baal clone does not escape his execution.