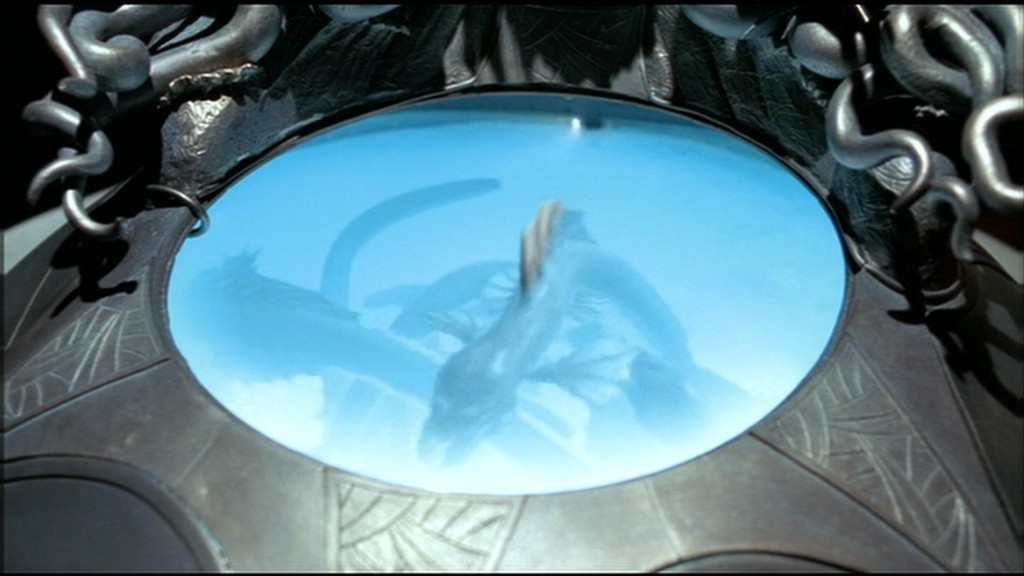 One of the Milky Way Galaxy's most dominant species for thousands of years, the Goa'uld are serpent parasites that forcibly take human hosts, and possess a thirst for power and worship. They have enslaved countless worlds, using their inhabitants as hosts, soldiers, miners, and personal slaves.


The symbiotic creatures are birthed from asexual mothers, Goa'uld queens. In the process every newborn symbiote inherits the genetic memory of the one before it. It is approximately a decade after their creation before the Goa'uld are capable of being anything more than helpless, squealing snakes. They must be fed a steady electrical current in an aquatic container or incubated in pouches created in the abdomens of Jaffa, slave warriors in the service of the Goa'uld, to stay alive. After maturing, a symbiote is ready to take a host.

Physiologically, the Goa'uld differ somewhat from symbiote to symbiote. Younger Goa'uld tend to be far whiter with twin black eyes. The older and more mature, the more gray or green the serpents tend to be. The majority of the species has four bright eyes and short fins to propel them in an aquatic environment.

More mature symbiotes are capable of jumping significant distances, despite their form. Utilizing their powerful, four-pronged jaws, they burrow through the back of the neck (or through the soft tissue at the back of the mouth), wrapping themselves around the victim's upper spinal column and into the brain. Instantaneously the Goa'uld has control of the physical body, suppressing the original individual's consciousness.

Goa'uld symbiotes have incredible regenerative abilities and, with the aid of a sarcophagus, they are capable of living thousands of years in the body of a human host. Once a Goa'uld is old enough to begin utilizing its healing abilities, it is implanted within the incubating pouch of a Jaffa in a ceremony known as the prim'tah. (During the period the Goa'uld is within a Jaffa, the term "prim'tah" can also refer to the infant symbiote itself.) The Goa'uld and its Jaffa are unable to communicate by conventional means, unless the Jaffa is in a deep state of kelnorim meditation. On this level of the subconscious, the Goa'uld receives vital information necessary to repair most illnesses.


The origins of the Goa'uld lie on the planet designated P3X-888. Long ago the Goa'uld learned how to infest and possess the Unas, another species native to that world, and learned to operate the Stargate on their planet and leave.

For an untold number of years the species was supposedly a dying race, unable to find hosts for their serpent form to exist within -- until a few thousand years ago, when the Supreme System Lord Ra, in a desperate pilgrimage through space to uncover his species' salvation, stumbled upon a planet of primitive humans: Earth. Ra harvested among the primitives and took the body of a young boy, seeding the rest upon different worlds in the galaxy as slave laborers.

The Goa'uld created Jaffa to serve them, whom the Goa'uld queens transformed from normal humans. The Jaffa became incubators for the larvae form as well as serving as the army for their entire populations -- greatly increasing the symbiote's chances of surviving and successfully taking over a human host. It is even possible that the Goa'uld occupied Earth in ancient times, posing as the gods and goddesses of various civilizations.


The Goa'uld society was feudal in nature. Their hierarchy was governed by the System Lords, a few dozen of the most powerful Goa'uld who were usually warring with one another for worlds and resources. Despite their cruelty, there were several rules that most strictly follow. For instance, it was forbidden for two Goa'uld, within their host bodies, to sexually produce a child. The human child, called a Harcesis, possessed the Goa'uld genetic memory and was thus a great security risk.

The Goa'uld were opposed by the Tok'ra, a rebel subset of the species who, by nature of personal choice, differed from them on a philosophical level. The Tok'ra choose to co-exist with willing hosts, rather than take them by force.

The term "Goa'uld" is loosely used in that it is often mistaken as the primary definition of a symbiote; but the Tok'ra, who possess genetically identical creatures within, refuse to be known by the term "Goa'uld," believing it should only be used to define any symbiote demanding power and worship for themselves.

Without the Jaffa the Goa'uld were nothing more than parasites. To remain in control of the planets they conquered, the Goa'uld pose as various gods from Earth mythology, so that the masses (people whose ancestors were transplanted from Earth thousands of years ago) would follow and obey.


During the final years of the last ruling dynasty, the Goa'uld began to show zero population growth, as the System Lords had literally been devouring symbiotes. Their desire for power and dominance, even over their Goa'uld brethren, was one of many reasons which led to their ultimate demise.

A major blow for the race came with the rebellion of the Jaffa [[Teal'c], who recognized the potential in the Tau'ri and chose to defect to them. Over the course of almost a decade Stargate Command and the Tok'ra worked to undermine Goa'uld authority. The Goa'uld, always overconfident, overestimated their chances.

The ultimate turning point was the arrival of the Replicators in the Milky Way Galaxy. The Goa'uld, whose tactics were unsuccessful against the mechanical "scourge," quickly lost their domains to the machines. The Replicators were defeated by the Dakara super-weapon at Dakara, but by then the damage to their dominion had been all but complete. The System Lords had been defeated, the remaining Goa'uld retreated and freedom was finally in the hands of the Jaffa.

Minor Goa'uld had to reevaluate their use in the new galactic landscape. The later arrival of the Ori provided them with a brief opportunity for a say, but ultimately this was not enough. Many Goa'uld now hide out on Earth in human beings responsible for governing many large firms and businesses, but are under the watchful eye of the N.I.D.

"Stargate" the Movie - Earth encounters the Goa'uld when the first Stargate team frees the people of Abydos from slavery to Ra.
Children of the Gods - The team learns the true nature of the Goa'uld when the must free kidnapped refugees from Apophis.
The Enemy Within - The S.G.C. fails to remove a Goa'uld symbiotee from Major Kawalsky, forcing them to wonder if it's even possible.
Thor's Hammer - SG-1 learns that the first hosts of the Goa'uld were the Unas, nearly unstoppable, beast-like creatures.
Hathor - The team has their first encounter with a Goa'uld queen when Hathor takes over the S.G.C.
There But For the Grace of God - Jackson is sent to an alternate reality where the Goa'uld conquer Earth.
The Serpent's Lair - SG-1 thwarts a Goa'uld attack on Earth.
In the Line of Duty - Earth discovers that there is a group of rebel Goa'uld who oppose them -- the Tok'ra.
Fair Game - The System Lords negotiate with the Asgard to include Earth in the Protected Planets Treaty.
The Devil You Know - The balance of power among the Goa'uld is shifted after the Tok'ra kill the powerful rogue Sokar -- and Apophis escapes his prison.
Crossroads - A Jaffa priestess succeeds in communicating with her larval symbiotee, unknowingly allowing the Goa'uld to plant a spy within the ranks of the Tok'ra.
The First Ones - The S.G.C. discovers the original, primordial homeworld of the Goa'uld.
The Serpent's Venom - When Apophis destroys Heru'ur, he acquires a force capable of overwhelming all the System Lords combined.
Exodus - SG-1 and the Tok'ra return the balance of power to the feuding System Lords by wiping out much of Apophis's fleet.
Between Two Fires - A powerful new Goa'uld reveals his advanced technology by destroying Tollana.
Summit - Dr. Jackson infiltrates a rare meeting of seven System Lords to kill them, as part of the Tok'ra's final plan to exterminate the Goa'uld.
Last Stand - The Tok'ra plan fails when Anubis attacks their base, and SG-1 barely escapes with their secret formula for a symbiote poison.
Revelations - Anubis scores a major victory for the Goa'uld when he destroys an Asgard battleship and captures Thor.
Redemption, Part 2 - Anubis uses a weapon of the Ancients to destroy the S.G.C.'s Stargate.
Nightwalkers - Cloned Goa'uld take over the population of a small Oregon town in the hopes of building a starship and escaping Earth.
Abyss - The System Lord Baal captures Colonel O'Neill and tortures him for information regarding his personal slave and the Tok'ra.
Full Circle - Anubis arrives at Abydos to find the Eye of Ra, a powerful crystal capable (in concert with other crystals) of powering a weapon that can wipe out entire planets from orbit.
Lost City, Part 2 - Anubis and his forces are destroyed in an attack on Earth, once again creating a power vacuum in the System Lord collective.
Critical Mass - A Trust Goa'uld is implanted in Colonel Caldwell, who manipulates Atlantis's command codes so the city's Z.P.M. will explode. Reckoning, Part 2 - The Replicators invade the dominions of the Goa'uld System Lords and defeat their forces, leaving their dynasty in ruins.
Stargate: Continuum - Baal, the last of the System Lords, is executed on the new Tok'ra home world.