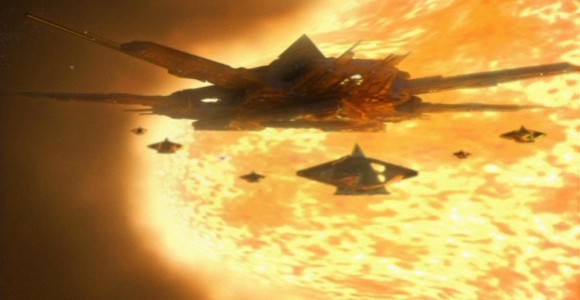 SG-1 helps to evacuate the Tok'ra to a new base – but matters are complicated when a spy reveals their location to Apophis. The team attempts a daring plan to take out the Goa'uld's powerful fleet.

On the Tok'ra homeworld of Vorash, Tanith is surprised to learn that a Goa'uld mothership has been spotted entering orbit – and that the Tok'ra have been expecting it. Jacob Carter transports into the hidden underground caves of the Goa'uld resistance movement, accompanied by the mothership's owners: Colonel Jack O'Neill, Major Samantha Carter, Dr. Daniel Jackson and Teal'c.

Actually, the ship is owned by Earth and Stargate Command. General Hammond has agreed to loan it to the Tok'ra (after recovering it from Cronus following the System Lord's recent death ["Double Jeopardy"]), in exchange for instructions on how to operate it. The Tok'ra will use it to transport all of their people and the Vorash Stargate to a new world – a planet off the Goa'uld map of gates, so that they can finally establish a secure, long-term base of operations.

Tanith, therefore, will not be going with them. He is a Goa'uld spy in the service of Apophis, whom the Tok'ra have been using for months to funnel disinformation to the Goa'uld ("Crossroads").

Tanith is put into a holding cell, and Teal'c soon visits him with news of his sentence. His Goa'uld symbiote is to be extracted and left behind on Vorash to die; hopefully, his host Hebron will survive. The spy has few options, and taunts the Jaffa about the murder of Teal'c's lover, Shau'nac ("Crossroads"). Tanith won't go quietly, though: he fakes a suicide attempt and overpowers his guards. He escapes to the surface, where he has hidden a Goa'uld communications device.

Teal'c searches the surrounding desert for hours, but cannot find the traitor. Tanith has signaled Apophis, who will arrive with an attack fleet in less than a day – forcing SG-1 and the Tok'ra to adopt a new plan. The inhabitants of Vorash will be evacuated through the Stargate. Jacob and the team will then use the Goa'uld mothership to send the gate – connected to a Stargate near the event horizon of a black hole ("A Matter of Time") – into the sun. The black hole on the other side will pull through matter from the star, causing it to become unstable and triggering an artificial supernova. The entire Vorash system will be incinerated within minutes – and hopefully, Apophis' massive fleet along with it.

Teal'c derides himself for having let Tanith slip through his grasp a second time. He believes he should have avenged Shau'nac's murder when he had the chance. But it is too late for Tanith, who is sure to be incinerated along with the planet.

The plan seems to work – the Tok'ra are evacuated, and Carter is able to dial the gate to the black hole planet and enclose it in an energy shield. It is sent hurtling toward the sun, leaving a little less than an hour for Apophis to arrive and be caught in their trap.

But Apophis isn't the first to show. An Al'kesh, a Goa'uld mid-range bomber, appears and attacks SG-1's mothership, knocking out main power and the hyperdrive. Sam and Jacob rush to fix it, while Teal'c and Jack pursue the ship in a death glider. They shoot it down on approach to Vorash, but their ship is damaged and they also crash-land.

Apophis' fleet arrives and takes up orbit around Vorash, and two Jaffa soldiers transport to the surface to pick up Tanith. But first, he leads them to Jack and Teal'c – and Teal'c is shot through the chest with a staff blast. O'Neill barely escapes, and watches as Tanith transports to Apophis' ship with Teal'c.

O'Neill returns to his own ship and reports that he believes Teal'c to be dead. He learns that the hyperdrive has been restored. The sun explodes, and the planet Vorash is incinerated. Jacob and SG-1 engage the hyperdrive and barely escape the shockwave. Apophis' fleet is caught unaware, and destroyed.

But the shockwave catches the tail end of the team's ship, sending them far off course in hyperspace. They find themselves in a distant galaxy, 4 million light years and 125 years' travel away from Earth. SG-1 is stranded.

Not only that, but an all-too-familiar enemy arrives beside them. Apophis' mothership escaped the blast and suffered the same fate as SG-1. The enemy ships have been marooned together.