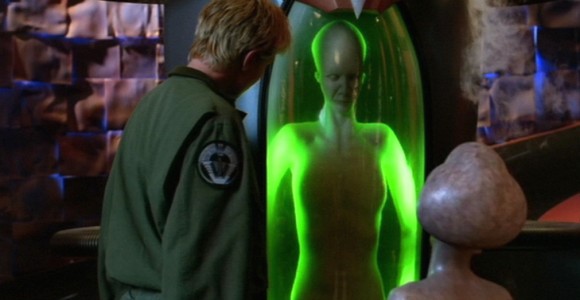 SG-1 must come to the rescue of their once-powerful allies when the Goa'uld attack a secret Asgard laboratory.

The Goa'uld Osiris leads the assault on a seemingly unpopulated planet from the pel'tak of her powerful mothership. But an Asgard battleship quickly arrives, demanding that the weaker vessel retreat. Osiris refuses, and Asgard Commander Thor fires on her ship – to no effect. The shields hold, and Osiris proclaims that their days of bowing to the technologically advanced Asgard are finally over.

As SG-1 continues to deal with the passing of Dr. Daniel Jackson ("Meridian"), Stargate Command receives an unexpected guest: Freyr, a member of the Asgard High Council, arrives through the Stargate with an important request. A top secret Asgard laboratory has come under attack by the Goa'uld, and Thor has been killed trying to defend it. The Asgard ask SG-1 to take their Goa'uld cargo ship to the planet to rescue Heimdall, an Asgard scientist whose research is vital to the future of their race.

The team agrees, and departs for the distant world. They avoid detection by Osiris' ship, still in orbit searching for the hidden underground lab, and are transported beneath the surface by the Asgard. Inside the lab, they meet Heimdall. But he is not prepared to leave just yet – the team first must rescue Thor, who is still alive on board Osiris' ship. He has been taken prisoner, and Anubis himself is soon to arrive to conduct his interrogation. The Goa'uld must not be allowed to obtain Thor's knowledge.

While Heimdall prepares his research for evacuation, Jack O'Neill and Teal'c transport aboard the Goa'uld mothership (masking their entrance by coinciding the transport with Anubis' arrival). Major Samantha Carter remains in the lab, using the Asgard scanners to aid them through the Goa'uld corridors. The two must disable the shield generator, so that Heimdall can transport them and Thor out.

Jack and Teal'c make their way through the ship's corridors, but are soon surrounded by Jaffa. Their transport up was detected. Carter uses the Asgard holographic projection technology to distract the Jaffa, allowing O'Neill and Teal'c to ambush them and escape – but they are eventually caught and locked up.

Meanwhile, as Osiris continues her search for the Asgard lab, Anubis informs Thor of his plan. He has acquired new technology that will aid him in learning Asgard secrets: a device will be implanted into Thor's brain, forming a link with the ship's computer. His knowledge will simply be downloaded.

Thor is able to resist for a time, and uses the ship's internal communications system to synthesize his voice and speak to O'Neill and Teal'c in their cell. He is able to rewrite some minor security subroutines in the computer system, and opens their cell door. But they must hurry – he cannot hold out against Anubis' technology for very long.

Below the planet's surface, Heimdall explains the nature of her vital research to Major Carter. The Asgard are clones, and have not been able to reproduce sexually for centuries. When an Asgard is near death, his consciousness is transferred into a new clone body, giving them a measure of immortality. But they have been unable to perfect cloning technology, leading to a controlled degradation with each generation. The Asgard are a dying race.

Heimdall shows her his discovery: a tall, humanoid-looking Asgard. It is one of their genetic ancestors – an Asgard who left their home world some 30,000 years ago. The ship went off course and crashed on this world, in Earth's galaxy, where the Asgard found it six months ago. He could be the genetic key needed to save the Asgard. They transport the specimen back to SG-1's cargo ship, but Carter returns to the lab to help her teammates.

Osiris finally locates the secret laboratory, and arrives with a contingent of Jaffa. Heimdall and his research are gone, but Osiris does find Major Carter. She begins to torture her with a Goa'uld hand device, demanding to know where Dr. Jackson is. "He's dead," Carter tells her.

On board the mothership, Teal'c and O'Neill subdue a group of Jaffa and take their weapons, using them to destroy a control junction for the ship's shields. Before the Goa'uld can switch to back-ups, the Asgard transporter whisks them away to the cargo ship, along with Thor. Carter is also transported right out of Osiris' clutches.

The ship rises out of the atmosphere, but is pursued by the mothership. They have no way of escaping, but the Asgard cavalry appears in the nick of time. Freyr arrives with three battleships, and Anubis flees.

Back at the S.G.C., Carter reports that the Asgard managed to remove the device from Thor's brain – and that the technology is unlike any they've ever seen. But Thor himself has slipped into a coma, and his prognosis is not good. But, with help from the android recently found by SG-1 ("Menace"), it looks like the Asgard may have finally turned the tide in the war against the Replicators.

As SG-1 leaves the base for dinner, they feel a sudden breeze in the corridor. Could it be Daniel, still watching over them? O'Neill smiles as he enters the elevator.