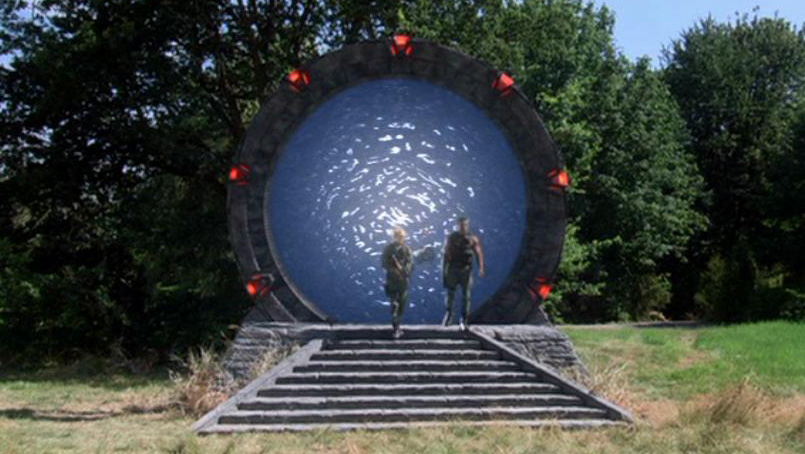 An advance piece of alien technology capable of sending people and objects millions of light years in an instant, by means of an interstellar conduit called a wormhole. The Stargate is a massive, circular ring with an inner track of 39 symbols representing star constellations. Constructed millennia ago by the Ancients, the gate is made of the alien mineral naquadah and weighs about 64,000 pounds. There are thousands of them located on habitable (or once habitable) planets throughout the Milky Way and Pegasus Galaxies – and beyond.

On one side of the gate are positioned nine equally-spaced, V-shaped locking mechanisms called chevrons, capable of locking at least seven symbols in place via a freely-spinning inner track. The first six glyphs identify a destination point in three-dimensional space, while the seventh represents the point of origin. When the seventh chevron locks, an unstable energy vortex emerges from the gate in a violent "kawoosh," incinerating everything in its wake. (In an 8-chevron address, the additional chevron adds an extra distance calculation – like dialing a different area code. The unique 9-chevron address dials to the Ancient deep-space exploration vessel Destiny.)

Once the vortex has dissipated and the event horizon is established, outbound travel may commence. Travelers are only able to enter the wormhole from the front side of the event horizon. After a transition time of approximately 0.3 seconds (on average, when traveling within the same galaxy), objects exit the destination Stargate at the same speed they entered.

Once objects have exited the gate on the other side, the Stargate has the capability of shutting itself off. The maximum amount of time a wormhole can be sustained under normal circumstances is around 38 minutes, though the gate will often shut down when it determines that no additional travelers are attempting to pass through.

The Stargate is essentially an enormous superconductor, capable of harnessing power from a wide variety of energy sources, especially direct electrical current. When the gate has absorbed enough energy to operate the inner track will unlock, allowing a manual dial in case the dial-home device (D.H.D.) is disconnected or inoperable. 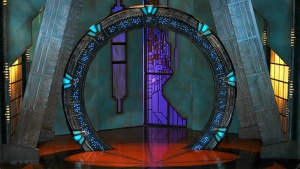 The Stargate network as built by the Ancients extends beyond our own galaxy. Most gates are paired with a D.H.D., by which a user dials an address to another world. The S.G.C. does not have a D.H.D., and instead has rigged a computer system to access the gate's systems and dial addresses. (This control system is only partial, and from time to time requires certain safety protocols within the gate to be bypassed in order to get a lock.)

Stargate technology was devised by Alteran scientists around the time that the ancient race emigrated from their home galaxy to the Milky Way. Over time the Alterans (who would later come to be known as the Ancients) built a vast gate network here.

A group later relocated to the Pegasus Galaxy, where another Stargate network was built using more modern Stargates (with distinct, blue chevrons). Some Stargates in the Pegasus Galaxy have been placed in space in orbit of planets, rather than on their surfaces. Rather than using a connected D.H.D., space-based gates are powered by three power nodes, and dialing is accessed by a panel on board a ship (such as a Lantean Puddle Jumper).

Stargates require an extraordinary amount of power to establish a wormhole for travel between galaxies – more than a D.H.D. alone can provide. Usually the Ancients relied upon Zero Point Modules to achieve this. But they also encoded the new Pegasus gates to be unable to dial outside their galaxy – with the exception of Atlantis's own Stargate, which uses a unique control crystal to be able to dial Earth. 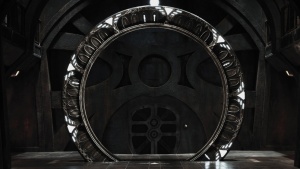 Perhaps the oldest gates in existence are in the style of the Destiny Stargate. These Stargates are manufactured and placed on planets by automated Ancient seed ships in numerous galaxies beyond our own. Rather than being distributed throughout inhabited galaxies these gates are seeded along a predetermined flight path, ahead of the Destiny itself.

This model of Stargate seems cruder, with the entire gate spinning freely (without a separate inner track) and without moving chevrons.

Gates deposited on planets in distant galaxies by the automated vessels also have a smaller range. An address dialed from one planet is able to reach several other gates in close proximity, but unlike the more modern gates they generally cannot reach every other Stargate in that galaxy.

Because they are made of naquadah, Stargates are exceptionally difficult to damage or destroy. Instead, a Stargate may be effectively taken offline by burying it. When matter fully occupies the space in the center of the ring, a wormhole cannot form.

Because the Stargate address system was originally coded to use the relative positions of star constellations (as seen from the surface of Earth, where the Ancients lived), the address to a given planet may change over time as the stars in our galaxy drift further apart. The Stargates are programmed to make automated correlative updates, periodically dialing their neighbors to transmit updates regarding Stargate coordinates and system modifications. (Because Stargate Command's gate was long disconnected from the network and has no D.H.D. to aid in this procedure, the base's dialing computer is programmed to calculate any changes to a gate address to account for millennia of stellar drift.)

Stargates can be relocated from one planet to another. In such instances the address to the gate will change to reflect its new location in space. But an individual gate apparently can also be hard-coded to continue to use a specific address. This was required in order to construct the McKay-Carter intergalactic gate bridge between the Milky Way and Pegasus Galaxies, achieved by stringing together dozens of reclaimed Stargates in a chain to cross the vast empty space between galaxies.

Two Stargates may be operated on the same planet or within the same star system for outbound travel, sharing the same point of origin (the seventh symbol in an address). But they cannot be active simultaneously. In these circumstances one of the gates will take priority to receive incoming wormholes. If only one gate is connected to a D.H.D., it will take priority. If both have dialing devices, internal programming set by the Ancients determines which gate will have priority over the other.

Finally, there are additional restrictions in place to manage conflicts between Milky Way and Pegasus-model Stargates. When one gate from each of the two networks are in close proximity, the newer Pegasus gate will take priority to receive incoming wormholes. This can be bypassed with some careful reprogramming, which was required in order to make the intergalactic gate bridge functional in both directions of travel – since the Midway Space Station held one Stargate from each network.

"Stargate" the Movie - Dr. Jackson uncovers the seventh symbol, the point of origin, and opens the Stargate for the first time in nearly 50 years.
Solitudes - Another Stargate, predating the Egyptian gate, is accidentally discovered in Antarctica.
The Fifth Race - O'Neill boosts power to the Stargate allowing for an eighth chevron to lock on to gate coordinates in the Ida galaxy, far further than any previous lock.
Nemesis - SG-1 transports the Stargate to Thor's ship to escape a Replicator infestation; the Antarctic gate is removed from storage and set up at the S.G.C.
Redemption, Part 2 - Anubis's weapon, originally constructed by the Ancients, forces Stargate Command to hoist the Antarctic gate from Cheyenne Mountain into deep space, roughly three million miles from Earth, where it is destroyed. The Russians "loan" the U.S. the Egyptian gate.
Avenger 2.0 - Dr. Felger's lab assistant, Chloe, deduces a potential of 63 billion Stargates in the universe.
Reckoning, Part 2 - A program developed by Baal allows the Dakara Stargate to dial every other gate in the Milky Way network simultaneously, creating a branching wormhole.
"Rising, Part 1" - An expedition from Earth uses an 8-chevron address to travel to the Pegasus Galaxy, where they discover a brand new network of advanced Stargates.
Beachhead - SG-1 discovers that the Ori are capable of creating massive "Supergates" in space, large enough for whole fleets of ships to pass through.
Ripple Effect - Carter explains that typical gate travel is not instantaneous. On average it takes approximately zero point three seconds.
"The Return, Part 1" - John Sheppard uses a Puddle Jumper to make the first successful traversal of the intergalactic gate bridge, which connects the two Stargate networks by means of dozens of specially programmed gates strung across the vast emptiness between galaxies.
Air, Part 1 - Evacuees from Icarus Base discover a totally new kind of Stargate when they arrive on the Destiny, which appears to pre-date the Milky Way and Pegasus Gates.
Lost - After they are left behind on a planet Eli, Matt, and Chloe use the network of Stargate in a distant galaxy to try and get back within range of Destiny.
Incursion, Part 1 - The Lucian Alliance uses a Milky Way gate to make the second successful connection to Destiny using the ninth chevron.
Cloverdale - Sgt. Greer dials the gate repeatedly while under attack from alien creatures, using the unstable energy vortex to protect Scott and Chloe.
Twin Destinies - Eli's ill-advised plan to dial Destiny's Stargate from inside a star has unforeseen repercussions when a solar flare sends the entire ship back in time.