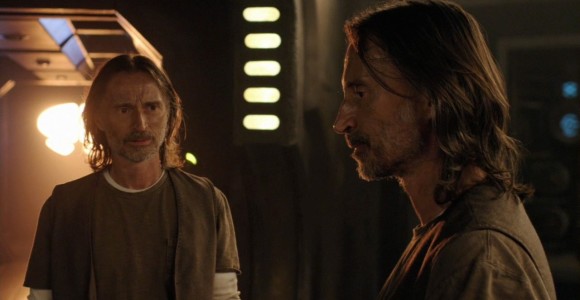 Rush expresses concerns when Earth approves Eli's plan to dial the Stargate home from inside a star – and is proved right when a duplicate of himself shows up with a warning from the future.

Having escaped the alien space battle ("Deliverance"), Destiny automatically sets a course to refuel in a nearby star. But major systems are on the brink of failure, and there are no spare parts. Eli Wallace proposes using the formula he and Ginn perfected ("Trial and Error"): while inside the star, they would dial the Stargate's ninth chevron to reach Earth. Dr. Nicholas Rush is opposed to the plan, concerned about the instability of such a wormhole and about an overload ("Earth"). But Colonel Everett Young, worried about the crew’s safety, decides to abandon Destiny if the Stargate can successfully connect to Earth. 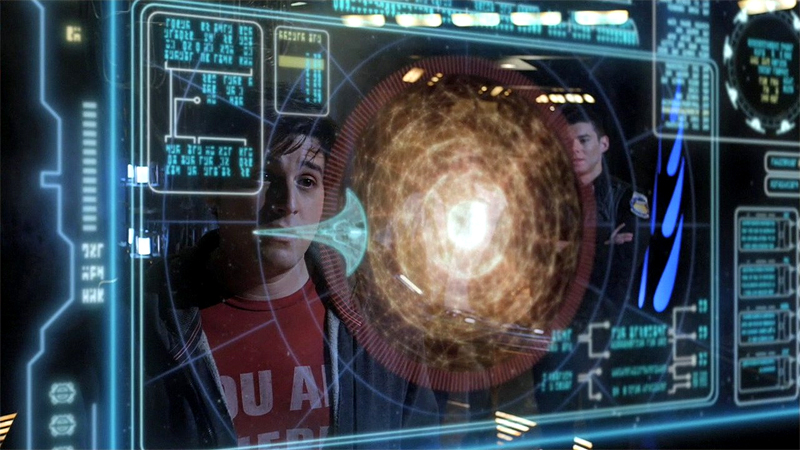 With 18 hours until they reach the star Rush tries to convince Young, Camille Wray, and Col. David Telford of just how dangerous Eli’s plan is. Even if they can successfully evacuate the ship, Rush feels he has no choice but to stay on board and complete Destiny's mission ("The Greater Good"). It is simply too important to forsake now, and he wants to see if anyone else among the crew will stay voluntarily. Young agrees to allow him to ask after the entire crew has been briefed on the plan.

Young himself, meanwhile, also agrees to stay aboard.

Once Eli’s work is verified by Homeworld Command (in the form of a visit from Dr. Bill Lee), the entire crew assembles in the Gate Room. Colonel Young asks Rush how many volunteers will be needed to continue Destiny's mission; besides themselves, ten more must stay aboard. Before Rush can ask, Telford summons Rush and Young to the bridge.

One of Destiny’s shuttles appears to be on approach. Dr. Rush hails Destiny from the ship ... even though there is a Rush already on the bridge. Alternate-Rush warns that everyone will die if they dial the Stargate.

He claims that he knows this is the case because it happened to him 12 hours ago. As proof, he repeats the conversation Young and Rush just had in the Gate Room about a dozen people being able to manage Destiny's systems.

The shuttle is allowed to dock. When the door opens, Alternate-Rush tries to attack Telford physically, accusing him of murdering Destiny’s crew. Injured and in shock, Alternate-Rush is taken to the Infirmary where Lt. Tamara Johansen treats him. 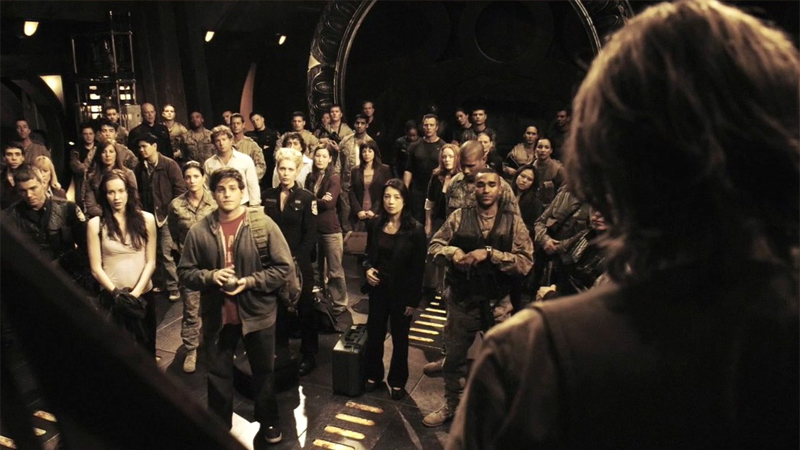 An hour remains before the attempt to dial the ninth chevron. Alternate-Rush explains that in his timeline they successfully opened the wormhole while inside the star – but a solar flare must have sent Destiny back in time. That’s how he is here now.

Alternate-Rush remembers asking his crew how they, descendants of the Ancients, could abandon the ship’s crucial mission. He also cautioned about the dangers of opening the wormhole in a star. Many in his timeline – including Young, MSgt. Ronald Greer, T.J., Dr. Dale Volker, Chloe Armstrong, Lt. Matthew Scott, Lt. Vanessa James, Varro from the Lucian Alliance, and even Eli – agreed to stay.

Incensed, the other Colonel Telford wanted to force all of them to leave Destiny and return home to Earth. Once the wormhole was established, Telford was the first through. Those who chose to leave were to follow in 3-second intervals ... but Destiny’s systems were overwhelmed, and the wormhole became unstable. Recalculating power levels, Eli and Alternate-Rush managed to stabilize the wormhole, and people began stampeding through the Stargate.

As systems continued to fail and it looked as though Destiny herself might not survive, Colonel Young ordered everyone through the event horizon. Alternate-Rush remained behind to keep the wormhole open.

Using the communication stones to contact Earth, he learned that only Telford arrived safely. Everyone else was lost, presumably dead. 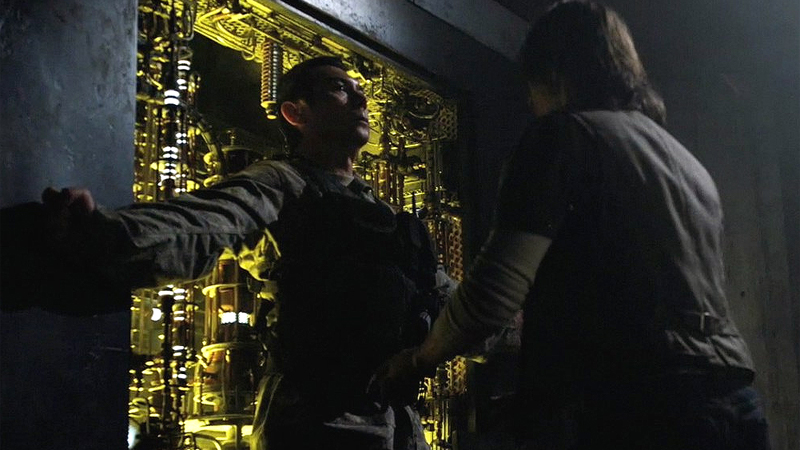 In our timeline, Young decides to abandon the plan to dial the Stargate to Earth. Watching from the observation deck and the bridge, they soon see the dying-Destiny from the other timeline. Seizing the opportunity to garner various supplies and spare parts from the ship's own duplicate, Colonel Telford organizes salvage teams. Using a short F.T.L. jump to put some distance between the ships, they are able to board via the Stargate. They have 40 minutes before the shields collapse and the other Destiny is destroyed the star. Young, Wray, and Eli remain our on Destiny.

On the other vessel, explosions rock the ship. At the half-way point Telford issues a pack-up order: it is time to evacuate. Members of the recovery team head for the Gate Room. Alternate-Rush spots a damaged but still functional set of conduits which could double Destiny’s weapons capability, and his counterpart goes to find tools.

As Alternate-Rush works, Telford appears. Angry and skeptical, he confronts Alternate-Rush. Telford believes that Alternate-Rush somehow sabotaged the effort to return to Earth, in order to have the crew he needs to continue Destiny's mission. When Telford gets physical, Alternate-Rush angrily pushes back. Off-balance, Telford staggers into the damaged conduit and 1,000 volts of electricity surges through him, killing him. Alternate-Rush is horrified, and runs off.

Meanwhile, Wray has used the communication stones to inform Earth of the situation. The Telford who made it back wants to talk to his other self. With everyone in the Gate Room, Scott orders the return to our Destiny while he and Rush join Alternate-Rush. Concerned about shield failure and Telford’s radio silence, Young asks Scott to find Telford – just as Scott discovers the Colonel’s dead body. 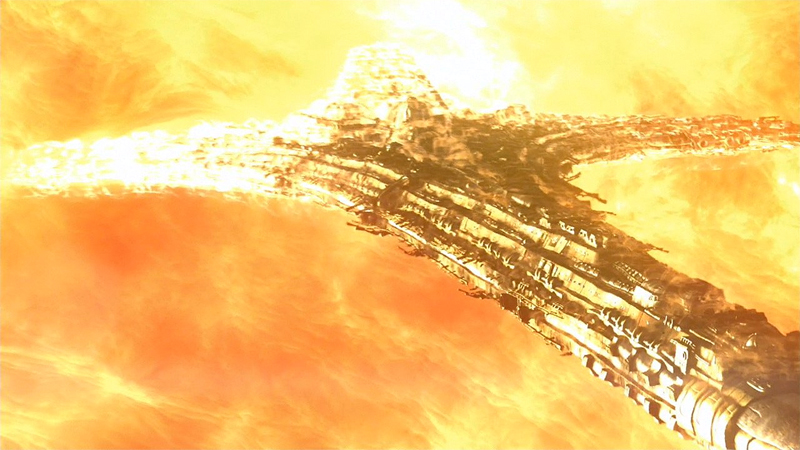 Believing he knows where Alternate-Rush has gone, Rush leaves Scott. The Lieutenant reports back to Destiny by radio, and Colonel Young orders him back to the Gate Room.

Rush locates Alternate-Rush in the lab housing the Ancient chair interface. As the dying Destiny begins her slide into the star’s core, Alternate-Rush sits in the chair – with nothing left to lose. Rush activates it for him and leaves, and the same mist that once enveloped Dr. Franklin ("Sabotage") swirls around the chair.

Scott holds open the wormhole back to our Destiny. He and Rush dive through as dying-Destiny’s shields fail. The ship is destroyed.

For reasons known only to himself, Rush lies about finding Alternate-Rush. Cynically, Young remarks that Rush must be happy – they now have the parts and supplies with which to carry on the mission.