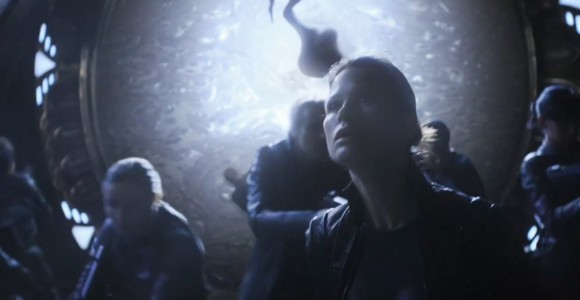 The Lucian Alliance manages to board Destiny, taking several crew members hostage in a bid to wrestle control the ship.

Colonel David Telford takes a final breath as the air in his makeshift cell vents into space. Everett Young checks his watch as Camille Wray and Lt. Matthew Scott peer through the porthole at Telford, fighting for his next breath. Twenty seconds elapse before Young opens the door and radios Adam Brody to restore the atmosphere. Administering CPR, Young brings Telford back from unconsciousness.

Gasping for breath, Telford warns of an impending incursion onto Destiny by the Lucian Alliance. Young immediately briefs the crew. They prepare Destiny by securing the Gate Room console, planting a kino to monitor the area, and locking down the egress corridors. Brody also prepares to vent the atmosphere. 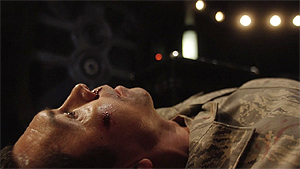 Young talks to Telford, whose consciousness is actually still in the body of Dr. Nicholas Rush (by means of the communication stones). Telford had once been a mole inside the Lucian Alliance, only to be turned to their side – likely using Goa'uld brainwashing technology. The near-death experience has broken the Alliance brainwashing, and Telford is mortified by his past actions.

Now armed against the enemy with Telford's knowledge, General Jack O'Neill orders the U.S.S. George Hammond, under the command of Colonel Samantha Carter, to attack the Icarus-type planet where the Lucian Alliance strike force is attempting to dial the 9-chevron Stargate address to board Destiny. The pyramid on the surface is protected by an anti-beaming shield, so Carter orders her F-302 fighters to assault the enemy base.

When Rush's body was being suffocated on Destiny, Telford's body at the Lucian Icarus planet (currently home to Rush's consciousness) went into convulsions. Once Telford's body recovers, Alliance Commander Kiva puts him back to work powering the Stargate from the planet's rich naquadria reserves and dialing the 9-chevron address. Shortly, they are pummeled by the first round of F-302 ordinance. With only one avenue of escape, Kiva dials the Stargate. When it becomes obvious that the procedure will cause the planet's unstable core to explode, Kiva evacuates all personnel through the gate.

Safely in his quarters, Eli Wallace monitors the Gate Room even as he replays Daniel Jackson's recording on the Lucian Alliance. As Chloe Armstrong comes in, Destiny drops from F.T.L. flight. The Stargate begins to spin. Eli alerts Young, who is with Brody and others in the Control Interface Room. 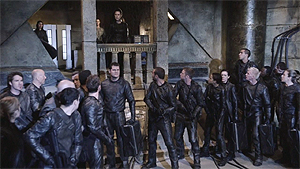 Young is poised to vent the Gate Room's atmosphere when he spots Rush emerge through the event horizon (in Telford's body). He is unwilling to sacrifice the two men to stop the enemy incursion before it starts. Furious about their forced departure, Kiva decides to shoot Rush/Telford. Telford's consciousness, however, has returned to his own body – evidently a result of gate travel. He forestalls her by shouting his password.

Demanding surrender, Young watches as Alliance personnel don breathing masks and attach a device to the door, which opens it. Gas canisters are tossed into the corridor. Faced with aggressive assault, Scott's team retreats. Hearing weapons fire, and determined to help, Rush (also back in his own body) runs from the infirmary. Lt. Tamara Johansen (T.J.) follows. They enter a corridor controlled by the Alliance, where T.J. is captured. Thanks to Brody remotely closing a set of doors, Rush manages to escape.

Elsewhere, Sgt. Hunter Riley is wounded as the Alliance advances through the ship. Chloe and Eli leave his quarters unawares, and step into crossfire. Although they reach the safety of a nearby transporter, Chloe is shot through the thigh. Destiny's military personnel retreat even further into the ship. 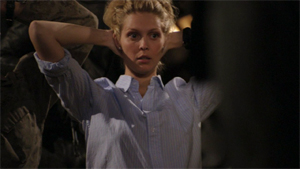 Stretched beyond what they can hold, Kiva's people regroup. Prisoners are assembled in the Gate Room. Riley glances toward the kino, revealing its location to the enemy. The intruders destroy it. Young, Rush, Brody, Lisa Park and Dale Volker confer in the Control Interface Room. Brody locks various sets of doors in order to buy some time. According to Scott's head-count 12 of their people are missing, including Riley, T.J., Chloe, and Eli.

Kiva radios Colonel Young, inviting him to surrender and join her team or be dropped off at a habitable world. Young counters with an empty threat to vent the atmosphere. As a demonstration of her power, Kiva prepares to kill Riley, T.J., and an Airman – but Telford stops her. He offers to assist her in taking control of Destiny, suggesting that he knows a way to get to the Control Interface Room. Kiva provides him with a team. He also tells her that the obviously pregnant T.J. is a medic. T.J. is immediately given the difficult task of saving the wounded Varro, one of Kiva's chief henchman.

Before Telford's team moves out, Camille Wray offers to negotiate an exchange of prisoners, which Kiva considers.

Meanwhile, still in the transport chamber, Eli has stopped Chloe's bleeding. The transporter has taken them to an uninhabited and unexplored area of Destiny. When she regains consciousness, they try to find their way back. Too weak to walk further, Chloe allows Eli to carry her. 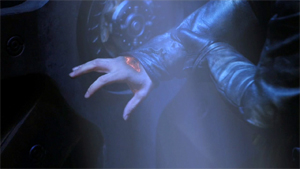 Confident that Telford will help them, Young apprises O'Neill of the situation via the communication stones. Telford's team cuts a hole into an adjacent corridor. Spotting an interface panel, Telford highlights their route as a signal to Young. Young repositions Lt. Scott and others ahead of the assault. Using their special device, an Alliance member starts to open the final door. From a thinly-shielded hull breech, a beam of light fries the man to a crisp. When the team runs away, Telford opens the door. He consults with Young before heading back to the Gate Room.

All over Destiny, lights flicker in response to a power overload that has caused a temporary disruption of all ship's systems. Kiva believes Young is responsible, but Brody and Rush are puzzled. Nor do they understand why Destiny hasn't resumed F.T.L. flight.

Kiva has T.J. request medical supplies. Wray argues for providing them and the prisoner exchange. Rush is dead-set against it. Young decides that now, while everyone is on edge, it is time to act.