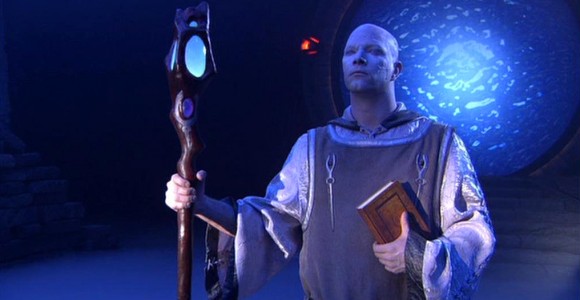 Samantha Carter returns to Stargate Command when the Ori seize control of a planet, using an expanding force field in an attempt to gain a foothold in our galaxy.

A Prior returns to planet Kallana, eager to hear the decision of the Jaffa settlement. But their representative, Latal, speaks for the people. He has read from the Book of Origin and declares that they do not wish to serve the Ori. When the Prior does not leave the Jaffa fire staff weapon blasts in his direction, but he whisks them into the sky with his own staff. A large blue field begins to form around the vicinity of the Prior and Stargate.

Stargate Command receives a text message from Nerus, a minor Goa'uld who served Baal for many centuries. He wishes to work for the S.G.C. to develop new technology to defend against the Ori threat.

After a thorough search Nerus is permitted to travel to Earth. He reveals a small holographic device (much like the device once used on Vorash) that has detected the activity on Kallana. His readings are two days old, and the bubble is expanding. He urgently suggests that General Landry dispatch a team to throw every conceivable weapon at the bubble while Nerus attempts to find a way to bring it down. Landry agrees to send a naquadria-enriched Mark IX warhead with its inventor, Colonel Samantha Carter, and Vala Mal Doran (still present because of the bond between her and Daniel Jackson) in tow.

With the Stargate permanently active on Kallana (likely powered by a black hole in the Ori galaxy), SG-1 travels to P4C-452 to hitch a ride with Prometheus. Once aboard, Colonel Pendergast orders a course to Kallana. Colonel Carter's experimental warhead will be the device used in the unlikely event the Prior is swayed.

When Prometheus arrives in orbit SG-1 beams down to Kallana with the warhead. As expected, the Prior is unwilling to listen, but after the deployment of the nuke weapons fire begins to impact the bubble. Three of Gerak's Ha'tak have arrived and have begun to pelt the energy field with plasma fire. He agrees to hold off after he learns that SG-1 is on the planet, but resumes after the team returns to Prometheus, the nuke armed.

Before the detonation the Prior places his hand on the gate, likely extending his personal shield to help protect it from the blast wave of the nuke (before sacrificing his own life in the process). Almost immediately the explosion increases the radius of the field. Only then Carter realizes that the Ori were unable to calculate the required power output from the other galaxy, so they developed a forcefield that would be strengthened by enemy weaponry. The nuke provided 70 percent of the energy they needed to expand the field.

Gerak's Ha'taks continue to fire. As soon as the field is completed dozens upon dozens of craft, relatively ten meters in length, emerge through the molten Stargate on the planet's surface and exit through the field. Extremely sturdy and intent on reaching a certain point in space, two of Gerak's motherships are destroyed by collisions, and his is critically damaged. Prometheus nicks one of the devices as well. Unwilling to risk further damage to his own craft, Gerak flees the scene, warning that a cloaked scout will remain to monitor Prometheus.

With sensors back online, Carter finds the small segments that traveled through the gate are coming together to form an enormous "Supergate," a Stargate orbiting the planet and large enough to bring through an entire invasion fleet from the Ori's galaxy. The forcefield that has now completely engulfed the planet is quickly shrinking it to create a singularity. With a black hole on the ends of both Stargates, the wormhole could be maintained indefinitely, allowing armadas of warships to pass through and conquer the Milky Way for the Ori.

Vala, not getting attention for her ideas, goes to the Prometheus's ring room and uses the rings to seek out the cloaked cargo ship. She zats the Jaffa and rings him back to Prometheus, taking the Tel'tak into the spot where the last missing Supergate segment would be placed. Pouring on the throttle, the cargo ship becomes jammed into the slot. As the singularity occurs, she tries to beam away, but does not make it back to the ship.

Back on Earth, General Landry interrogates Nerus (and an empty table where a feast once sat), who sided with the Ori in order to get Earth to provide their most potent weapons for the energy bubble. He tells the General that when he is put to death he will ascend to be with the Ori, but Landry insists that will not happen. Instead, he's going to be locked away deep inside of Area 51, intent on developing countermeasures against the Ori – the only way he will be able to satiate his hunger.

Fortunately for Dr. Jackson, the bracelet's effect had begun to wear off to a point where Vala's absence would not do him harm. Carter notes that the last few moments of telemetry revealed that a matter stream did leave the cargo ship. It is possible Vala was pulled through the singularity into the Ori home galaxy instead.

If the team wanted to send the Ori a message, they certainly did.