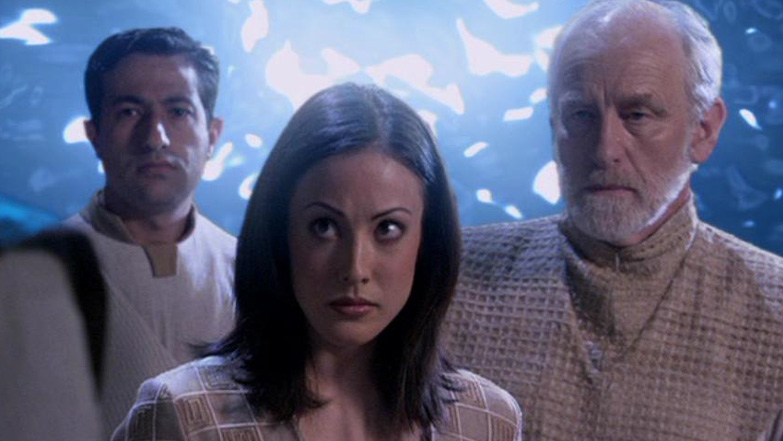 The original "builders of roads," the Ancients were once a race of advanced humans who were the original architects of the Stargate network. According to the Asgard they moved on from our part of space long ago. In fact, the Ancients learned to ascend to a higher plane of existence when a great plague swept across the Milky Way Galaxy. Many died out, but those who learned to ascend shed their corporeal form gained a new sense of purpose.

The Ancients were once key members of an alliance of four great races in the galaxy, along with the Asgard, the Nox and the Furlings. The Ancients lived on Earth long ago, having migrated there from their distant home galaxy (where their cousins the Ori would evolve and also learn to ascend). One Ancient, Ayiana, was buried in ice in Antarctica for millions of years. Ayiana was left behind by the Ancients when they left Earth with the city of Atlantis, moving to the Pegasus Galaxy between five and 10 million years ago.

In Pegasus the Ancients seeded human life on many hundreds of worlds, as they had once done in our galaxy. They lived there for millions of years -- but then they came upon a planet where a powerful enemy slept. The Ancients had never before encountered a race with technology that rivaled their own. Awakened, the Wraith began feeding on the human-populated worlds, until only Atlantis remained untouched. The Wraith brought their powerful weapons to bear on the city, but the Ancients' shield held. Defeated, they submerged the great city into the ocean, and the last of them fled through the gate back to Earth. There they presumably lived out their lives, telling stories that gave rise to the legend of the lost city. It is not known if these survivors ever ascended or had any contact with the ascended Ancients. Some traveled to other worlds in the Milky Way, apparently including scientists such as Janus and Moros (Merlin).

The Stargate network proves that the Ancients were one of the universe's most advanced species many millions of years ago, and had great minds into constructing a means to disperse many thousands of Stargates across the vastness of space -- even beyond our galaxy. They even had the technology to stop the movement of time itself (on several planets at once) and reverse it a number of hours, though they were unable to perfect that particular technology. Other advanced technologies left behind by the species include a device capable of altering human DNA to bring out advanced abilities, a healing device capable of restoring life and even animating non-living tissue, and more.

What is left of the Ancients, through gaining a higher moral center after ascension, is a hierarchy of somewhat omni-present, ethereal beings who feel they must remove themselves from interaction with all cultures beneath their non-corporeal plane. To merely interact with an individual beneath is breaking their law. Assisting a lower being in discovering ascension is punished by banishment. Meddling in circumstances that change the direction of a civilization is by far the most dire offense.

As punishment for breaking this law, the Ancients have been known to wipe out entire civilizations and abandon the one responsible (such as Orlin). They have also forced (or tried to force) transgressors to descend back to corporeal form. Ancients are, by every means, capable of drastically altering courses of events at will. But, aside from their often cruel behavior, the Ancients do possess a high moral center that governs the majority's actions.

Ancients also have the ability to appear in human form or to re-assume corporeal form permanently. Re-ascending then requires help from other Ancients.

Ascended beings have the ability to control weather conditions, turning a cloudless day into a hazardous lightning storm, and even using lightning as a weapon against enemies both in the air and on the ground.

Though the Ancients are not physically present, their actions have visibly altered the efforts of SG-1, among others. The Atlantis expedition is living in the Ancients' advanced city, which they were forced to abandon when the Wraith attacked thousands of years ago. Despite the fact that they are non-corporeal, they are still a powerful force to be reckoned with.

Maternal Instinct - SG-1 encounters the powerful being Oma Desala on the planet Kheb, who (along with another Ancient) helps people ascend.
Absolute Power - Shifu, the Harcesis child now ascended, visits Jackson on Earth, teaching him the danger of his Goa'uld knowledge.
Ascension - Carter meets another of Oma's race when Orlin -- banished by his people for interfering in another culture's development -- follows her back to Earth and reassumes human form.
Meridian - Oma visits Daniel Jackson after he is exposed to a lethal dose of radiation, helping him to ascend and begin a new journey.
Frozen - SG-1 finds a woman they believe to be an Ancient, who is millions of years old -- and who may hold a key to the evolution of humankind.
Abyss - Daniel returns to help Jack when he is imprisoned and tortured by the Goa'uld, and offers to help him ascend.
The Changeling - Teal'c, near the brink of death without his symbiote, falls into a realistic dream where he and SG-1 are fireman. The ascended Daniel Jackson incorporates himself into this dream to be a guiding light back to reality.
Full Circle - Daniel Jackson, assisting SG-1 in their efforts to protect Abydos from Anubis, realizes Oma Desala's race is the Ancients, and he is essentially an Ancient himself, and that Anubis learned to ascend but was sent back by the others. When Daniel tries to stop Anubis from destroying Abydos, Oma Desala or the others stop him.
Fallen - The Ancients return Daniel to human form, wiping his memory as punishment for his transgression on Abydos.
Lost City, Part 2 - SG-1 finds two abandoned Ancient outposts -- one of which is on Earth, and contains powerful drone weapons that destroy Anubis's attack fleet.
Rising, Part 1 - The Atlantis expedition finds the Ancients' lost city, and learns of the tragedy that befell them at the hands of the Wraith.
Hide and Seek - After an entity is set loose in Atlantis, McKay discovers that the Ancients had trapped it in order to study the ascension process.
Sanctuary - Major Sheppard's team encounters their first living Ancient in Chaya Sar, an ascended being who is protecting the planet from the Wraith.
Before I Sleep - Unable to hold out against the Wraith, the Lanteans abandon Atlantis and gate back to settle on Earth.
Threads - Oma Desala returns to save Daniel's life after he is killed by Replicator Carter, manifesting him in a diner where the other Ancients look on silently.
Origin - In a distant galaxy Daniel encounters the Ori (and their servants), a race of evil ascended beings distantly related to the Ancients.
Aurora - Sheppard's team finds a Lantean ship adrift on the edge of the Pegasus Galaxy, its crew in stasis but still alive.
The Fourth Horseman, Part 1 - Orlin returns to physical form to help Earth fight the Ori and their agents, giving up ascension once and for all.
The Pegasus Project - When SG-1 travels to Atlantis they encounter the ascended Morgan Le Fay, who is posing as the city's computer hologram to give them clues to find a weapon to use against the Ori.
Progeny - When the Atlantis team meets the technologically advanced Asurans, they discover that they are Replicators -- originally created by the Ancients thousands of years ago as a weapon to fight the Wraith.
The Return, Part 1 - A ship full of Ancients left over from the war return home to Atlantis, asking the human inhabitants to leave -- only to be wiped out by the Replicators.
The Quest, Part 2 - SG-1 discovers the Ancient Merlin (Moros) alive and well, working to complete a weapon that could destroy the Ori.
Stargate: The Ark of Truth - SG-1 travels to the Ori galaxy to cut off the enemy's influence, and must finally rely on the sacrifice of Morgan Le Fay to engage the ascended Adria in eternal combat.