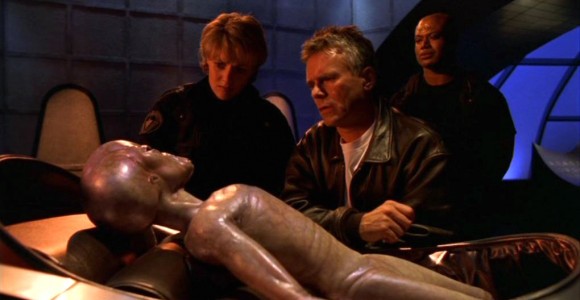 SG-1 faces creatures of mass destruction that even the Asgard can't control, and must destroy Thor's infested vessel before the Replicator bugs reach Earth.

With Daniel Jackson recovering from an emergency appendectomy, SG-1 is on vacation. Sam finally has the time to catch up on some of her research, Teal'c is off-world visiting his wife and son, and O'Neill is about to leave for a fishing trip to Minnesota.

But Thor, the powerful Asgard commander, has other plans. His ship, the Beliskner, has been overrun by what the Asgard call "Replicators" – technological insects that self-replicate and infest ships, planets, even entire systems. This is the great enemy with whom the Asgard are at war ("Fair Game").

The Replicator bugs have taken over the Beliskner and attacked Thor. They learned of Earth from the computer's database, and brought the ship there. The crew was left behind, but Thor destroyed the outbound transporter system and remained on board to try and stop the bugs from reaching Earth. Now that he has failed, he transports Colonel O'Neill to the ship to try and destroy the vessel before the Replicators land it and overrun Earth.

Jack learns that Thor is alone on the Beliskner and near death, and recognizes that he must destroy the ship – and die with it. He contacts the S.G.C. and requests a load of explosives, which he transports up. But against his orders, Teal'c and Major Carter arrive on the ship with the supplies.

Carter believes she has found a way for them to get off the ship after they crash it into Earth's atmosphere: a space shuttle is on the launching pad prepared for an emergency pick-up. The team battles the techno-bugs as they venture through the ship's corridors and back to Thor's chamber.

Teal'c and O'Neill locate the ship's bridge in an attempt to regain control of the navigational computer, but find it overrun with Replicators. Their only hope at destroying the Beliskner is to place naquadah-enhanced explosives outside the ship on the deceleration drive. Once the Replicators have built up their forces and attempt to land the ship, SG-1 will detonate the bomb and cause the ship to burn up in the atmosphere.

Still battling the seemingly invincible Replicators, the group puts the dying Thor into stasis and finds a new way to escape the doomed ship. They use the still-functioning inbound transporter to steal the S.G.C.'s Stargate. Fighting off wave after wave of bugs, O'Neill, Carter, and Teal'c dial the gate to P3X-234 and escape with Thor.

On Earth, General Hammond and Dr. Jackson watch the Stargate disappear, and figure out the team's plan. They're going to dial back to Earth and arrive through the second Stargate ("Touchstone"). Hammond orders it unpacked and made ready to use immediately.

The Beliskner crashes into the atmosphere and is destroyed. Fragments of the ship's hull crash into the Pacific Ocean, 400 miles off the coast of California. Naval teams are ordered to the site to recover the debris.

But at least one Replicator has survived the crash. It crawls out of the water and onto a chunk of debris, floating in the middle of the ocean and waiting for the Navy ships to arrive.