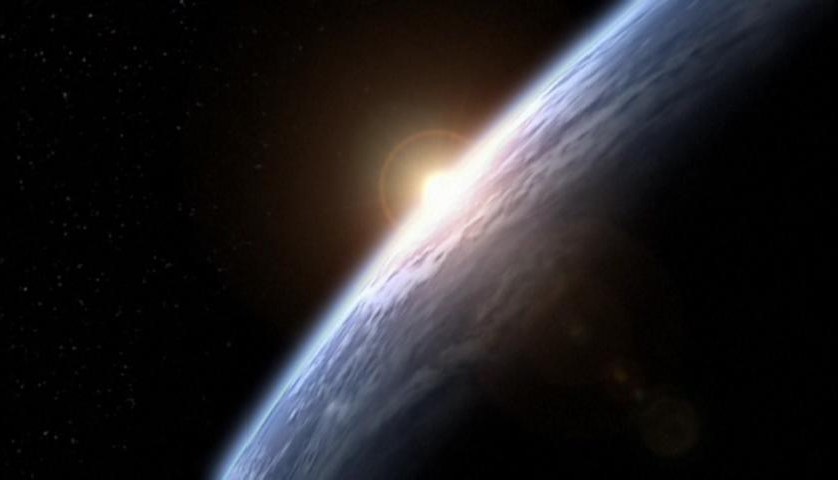 The first world where human beings thrived, also known as the home of the Tau'ri. The planet was home to the Ancients several million years ago, before they left the planet with their great city -- Atlantis -- between five and 10 million years ago and headed for the Pegasus Galaxy. Earth is now home to more than 7 billion humans, who are increasingly making their presence felt in the Milky Way Galaxy through increasing gate travel and interstellar travel.

Ra and the Goa'uld discovered Earth some 10 thousand years ago and captured a number of primitive humans, transplanting them throughout the galaxy in ships and through the Stargate -- seeding human life on numerous other world.

Several thousand years ago, the peoples of Earth organized a rebellion. The Stargate was buried, and Ra's Jaffa were overthrown. The Stargate was unearthed in 1928 in Giza, Egypt, and now operates from Stargate Command inside Cheyenne Mountain, Colorado.

The Ancient word for Earth is "Terra."

"Stargate" the Movie - The Stargate is uncovered in Giza, Egypt, in 1928, and unlocked in the 1990s.
Solitudes - A Stargate mishaps reveals the existence of a second gate on Earth, concealed in an ice cave in Antarctica.
Within the Serpent's Grasp - Apophis and Klorel poise their motherships to attack Earth, while SG-1 secretly tries to sabotage their plans.
The Serpent's Lair - Though Earth can offer no defense, SG-1 destroys Apophis and Klorel's motherships in Earth's orbit.
Fair Game - Earth avoids another attack from the Goa'uld by negotiating with the System Lords to be included in the Asgard Protected Planets Treaty.
Fail Safe - The Goa'uld attempt to destroy Earth by setting a naquadah- enriched asteroid on a collision course.
Redemption, Part 1 - Anubis uses an advanced weapon to try and detonate Earth's Stargate, with enough power to destroy the planet.
Redemption, Part 2 - The team averts disaster by sending the Stargate into deep space, saving Earth once again.
Disclosure - General Hammond and the Pentagon reveal the existence of the Stargate program to stunned representatives from the British, Chinese and French governments.
Lost City, Part 2 - Anubis brings his great fleet to Earth and begins his assault. SG-1 finds an Ancient outpost and super-weapon beneath the ice of Antarctica, and use it to destroy the ships and save the planet.
New Order, Part 1 - Out of options at the negotiating table, the System Lords dispatch a single Ha'tak to Earth to test the strength of the Ancient super-weapon (It is later destroyed by Baal).
The Fourth Horseman, Part 1 - A Prior plague is unleashed on Earth. The Ancient Orlin arrives in the hopes of constructing a cure.
The Fourth Horseman, Part 2 - With the combined efforts of Gerak and Orlin, a vaccine is devised to eradicate the Prior plague on Earth. Thousands are left dead, but countless lives are spared.
Uninvited - Mitchell and Landry must hunt a deadly alien creature that is loose on Earth.
The Road Not Taken - Sam is pulled into an alternate reality, where she saves Earth from an Ori attack by putting the entire planet out-of-phase.
Enemy at the Gate - Earth is attacked by a Wraith super-hive, which manages to destroy the Ancient weapon. After the battle's end, the city of Atlantis settles back onto the planet's surface -- in San Francisco Bay.
Stargate: Continuum - Baal travels back in time to Earth's past, preventing the S.G.C. from ever existing -- and returns decades later to conquer the planet.