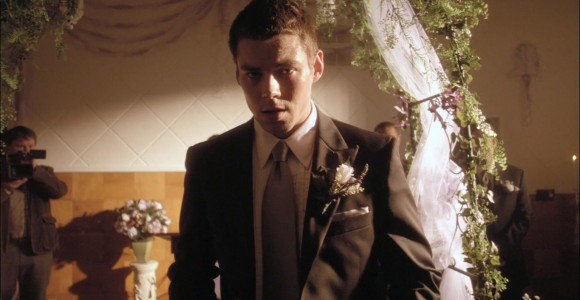 Lieutenant Scott is infected by a plant-like organism while surveying a planet, and suffers severe hallucinations of another life back home on Earth.

A bus arrives in the small town of Cloverdale. Lt. Matthew Scott and MSgt. Ronald Greer get off, happy to be home from Kandahar. Scott is soon to be married to his high school sweetheart, and has brought his friend home to stand as his best man. Matt spots his father across the street. Starting toward him, Matt is struck by a car.

Lt. Scott screams, momentarily regaining consciousness from the dream on an alien planet. A blue, fungus-like growth covers the top of his left forearm. He begs Lt. Tamara Johansen to cut it off. When he loses consciousness again, the team (also including Greer, Eli Wallace, Dr. Nicholas Rush, Dr. Dale Volker, Chloe Armstrong, and others from Destiny) carries Scott toward the Stargate. Dr. Rush and T.J. know, however, that they can't risk taking Scott back to the ship with such a fast-growing contagion.

Rush hurries ahead of them to request supplies from Destiny. Having dialed the Stargate, Rush briefs Colonel Everett Young by radio. Nothing has affected the alien infection. Asking for one of every medicinal, Rush also wants alien venom ("Time") ... and a bone-cutting saw.

In his mind, the unconscious Scott returns to see Young, his father in Cloverdale, attempting to revive him. Shaking off the accident and apologizing to the driver, Adam Brody, Scott introduces Greer to them. Greer is the best man for Scott's wedding to Chloe. Eli, Chloe's brother in the dream, videotapes everything.

The men return to Young's to await Chloe. Matt learns that instead of a bachelor party, he and Chloe will be going to the movies. His dismay is short-circuited by Chloe's arrival. Yet, after a few kisses, he falls over unconscious. He doesn't understand why he isn't feeling well. Soon, he and Chloe arrive at the movie – an MGM film called "Far Afield." Popcorn in hand, he recalls their first time at the theater before the film draws his attention.

On-screen, a man and a woman stand before an ocean of flowers. Scott shifts uneasily in his seat as the woman reaches out toward the flowers, causing a shimmer of color to pass over the field. Out-loud, Scott warns them to get out of there. As the couple gaze at one another, a tall, snarling flower stalk emerges. The man attempts to hold it off. It stings him. In pain, he grabs his knife and slices the stalk in half. Its blue sap splatters on the woman's clothing.

Unnerved and feeling like the scene is familiar, Scott runs into the lobby. Screams from the couple as they are attacked filter through the doors as Chloe and Scott leave. They run into local citizen Dale Volker, who helps Chloe stall him. When he calls Brody's bar and gets the all-clear, Chloe delivers Scott to his surprise bachelor party there. Eli records the event for posterity, capturing (among other things) an unfortunate pass that a drunk Matt makes at his ex-girlfriend, Vanessa. The men drink until Young and Greer half-carry Matt toward the car. Sheriff David Telford provides them a safe ride home. Scott talks to them as though nothing seems real.

It's not. On the planet, Rush brings supplies loaded onto Eli's kino sled ("Water"). T.J. tries everything, including acid and the alien venom. Nothing works on the infection that continues to spread, covering more and more of his arm and hand. As she prepares to amputate Scott's arm, Greer and the others warn that the creatures – perhaps just as much predatory animals as plants – are following them. With Scott on the sled, they race to the Stargate.

There, T.J. begins the amputation by slicing into Scott's upper arm. But his blood is blue, indicating the poison has spread throughout his body. With three hours left before Destiny jumps away, Greer intends to hold the Stargate to give Scott every chance of recovery rather than being left behind to die. He retrieves empty supply crates from the ship to build a defensive barrier. As soldiers dig a trench, he and others ready makeshift flamethrowers. Young also sends a kino to do a fly-over and monitor the stalks' advancement.

On the ship, Dr. Lisa Park warns the Colonel that bringing Lt. Scott back to Destiny is a tremendous risk, considering the infectious and virulent nature of the organism. Even bringing him on board and putting him into quarantine may not be safe enough.

In Cloverdale, Matt wakes up on his wedding day hung-over. Chloe asks if he is marrying her simply because it is what he's expected to do. Groggy, he vows that that is not the case before heading to see the town's Justice of the Peace, Nicholas Rush. Scott tries to tell Rush that something isn't right – that he is scared, that he's losing it. Fear is what tells us we are alive, Rush advises.

The bemused Scott meets Greer and Eli at the tailor shop to have their tuxedos fitted. Apparently concerned for his sister, Eli suggests that Matt has never been known to be a one-woman guy. Matt defends his intentions, only to pass out again.

T.J., a paramedic in the dream world, helps to revive him. Matt resists attempts to take him to the hospital, agreeing instead to try to eat something. As wedding guests arrive, he sits in front of a bowl of soup looking worse than ever, and questioning whether he is doing the right thing marrying Chloe. He doesn't want to hurt her. Greer suggests postponing. When Young comes in, Matt asks him what he should do. Young tells him to "Wake up!"

In the real world, Young orders everyone but Greer's defensive team to return to Destiny. T.J. has them spot-check one another first for any signs of the alien contaminate. When the Stargate kawooshes, they notice that the creatures momentarily recoil from it. Eli asks for a moment to say goodbye to Scott.

Chloe refuses to leave Matt. T.J. spots blue contaminate on Chloe's shirt, but there is no sign of infection on the skin beneath. They cut off and burn the affected cloth. Determined to stay, Chloe sneaks off. Believing she is resistant to the infection because of what the aliens who captured her did to genetically alter her ("Pathogen"), Chloe allows herself to be stung. When her blood remains red and it becomes clear she is successfully fighting off the infection, T.J. starts a transfusion directly to Matt.

With the stalks growing bolder, Greer sends everyone but Chloe back to Destiny. When his flamethrower's fuel runs low, he gathers Chloe and Matt to lie down on the gate ramp. Using the remote he keeps dialing the Stargate over and over, letting the energy vortex defend them.

In Scott's dream, the wedding proceeds. When Justice of the Peace Rush unites them "for as long as both shall live," Scott turns to Chloe and smiles. Chloe's face, as she smiles back, is half-alien.

Screaming, Scott wakes up on the ramp. He hits his forearm, shattering the blue growth. Chloe's altered antibodies have healed him. Greer herds Chloe and Scott through the event horizon onto Destiny, just beating the countdown clock.

Although they are safe again, Young tells Scott and Chloe that he intends to quarantine them – indefinitely. Not only has he learned that Rush's attempt to purge the alien alternations from Chloe did not work ("Pathogen"), but now Lt. Scott has been exposed to the same thing. He leaves it to her to explain what price Matt will pay for his life.

me alien horror. The movie was produced (in the fictional dream world) by MGM, the same studio that produces Stargate Universe.