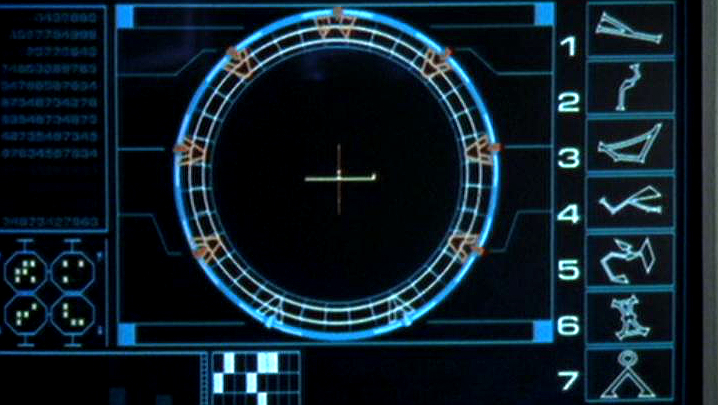 Any combination of seven, eight, or nine glyphs required to generate a destination through which one may travel through the Stargate to another world. The first six glyphs pinpoint a three-dimensional location in space. The seventh represents a point of origin. An eighth, and extremely rare, glyph denotes a different galaxy, akin to dialing a different area code.

Addresses are not random. One could stand at a D.H.D. for considerable periods of time, entering thousands of various combinations and never lock into a destination. It is believed there are a probable 63 billion combinations (ten Stargates for every person on Earth). This means an equal number of Stargates could potentially exist in the galaxy.

There are nine chevrons for the Stargate to engage glyphs. The ninth chevron is, to our knowledge, used by only a single gate address: the one determined by the Ancients (the builders of the Stargates) to reach their inter-galactic exploratory vessel Destiny.

"Stargate" the Movie - Daniel Jackson locates the Earth's point of origin on the Stargate, allowing the personnel to complete the address and lock on to Abydos.
The Fifth Race - Earth dials its first 8-symbol address when Jack O'Neill uses the knowledge of the Ancients to reach an Asgard world in the Ida Galaxy. Avenger 2.0 - Felger's lab assistant, Chloe, tells Carter and Jay of the potential 63 billion Stargate address combinations.
Rising, Part 1 - Daniel Jackson finds an 8-chevron address in the Ancients' database, allowing Stargate Command to dial to the city of Atlantis in the Pegasus Galaxy. Air, Part 1 - Nicholas Rush and the Icarus Base dial the only known 9-symbol Stargate address, connecting them to the Ancient vessel Destiny in a distant galaxy.