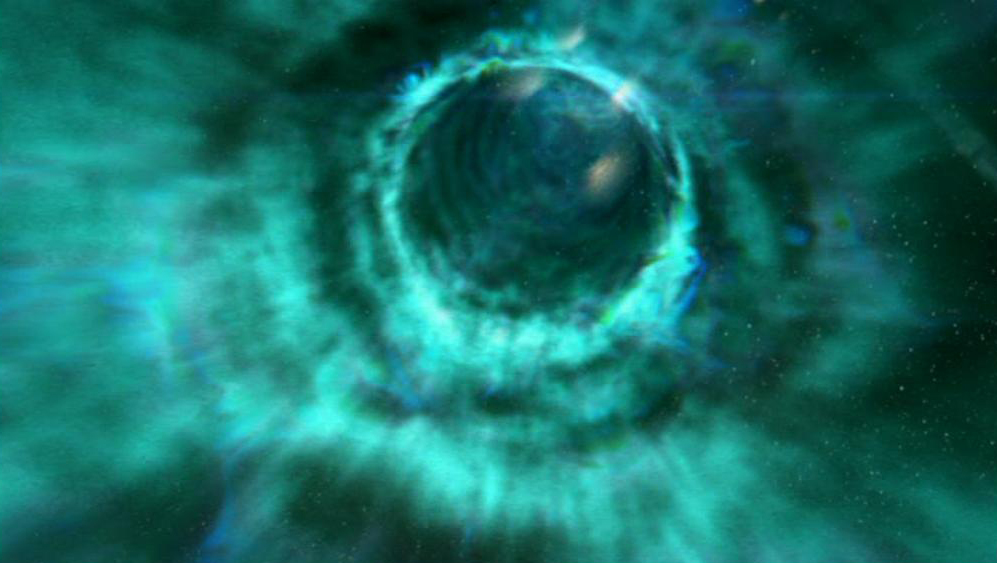 An energy conduit formed between two active Stargates. A Stargate transfers a person or object into energy as it passes through the event horizon, then transmits it through the wormhole to the receiving Stargate -- which then reconstructs the matter in its original form.

Wormholes traverse vast distances across the galaxy, and even between galaxies. The conduit does not always exist, but is formed only between two active Stargates. An object can travel in only one direction in a wormhole, through the initiating gate.

There But For the Grace of God - In an alternate reality, Samantha Carter learns the maximum length of time a wormhole can be maintained is 38 minutes.
A Matter of Time - When the S.G.C. connects to a planet near a black hole, its time dilation effects Earth backwards through the wormhole -- which fails to shut down long after the 38 minute window has past.
1969 - The gravity of a solar flare bends the wormhole back to Earth, throwing SG-1 back in time 30 years.
Window of Opportunity - An Ancient device on P4X-639 forces 14 Stargates' wormholes within a certain sector of space to fall prey to a primitive time machine that restarts every 10 hours.
Red Sky - By overriding the gate's built-in safety protocols, SG-1 accidentally establishes a wormhole through the planet K'Tau's sun -- bringing doom to their world.
Ripple Effect - Carter explains that typical wormhole travel is not instantaneous. On average it takes approximately zero-point-three (0.3) seconds.
Camelot - The Ori forces establish a stable wormhole between galaxies using a Supergate, allowing them to bring a fleet of ships to the Milky Way.
Stargate: Continuum - The team's travel through a wormhole to Earth insulates them from changes to the timeline affected when Baal alters events in Earth's past, allowing Mitchell, Carter, and Jackson to retain their identities and their memories.