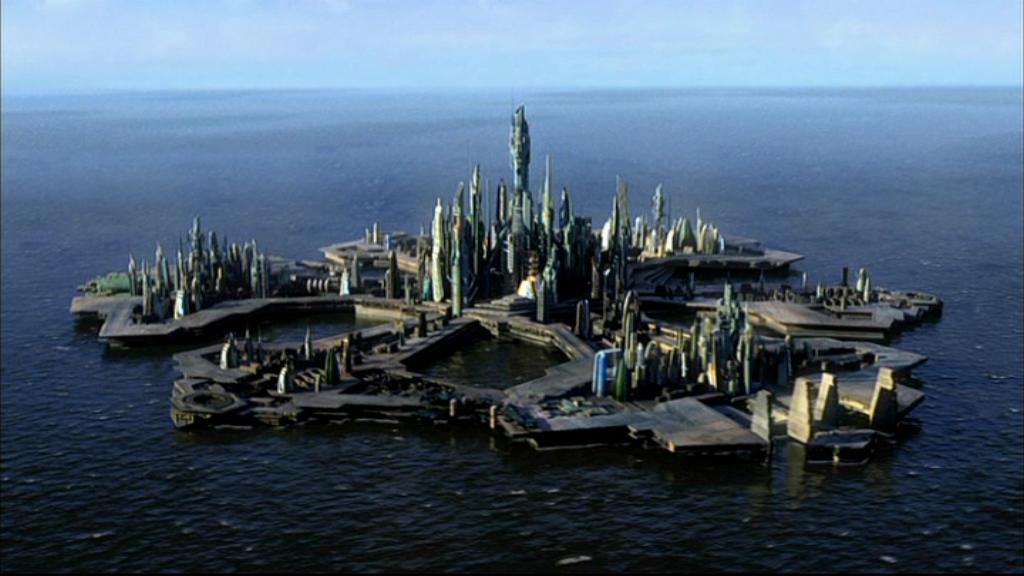 A massive city of the Ancients filled with untapped technology, believed to have served as the central nexus for all Ancient activity in the Pegasus Galaxy. When humans from Earth have found the lost city it became their base of operations in exploring the galaxy.

Six angular pylons connect to a central island, which includes the command tower. The entire city is normally powered by three Zero Point Modules, though they have expired. Atlantis is now powered primarily by numerous naquadah generators brought from Earth. The Earth ship Daedalus also delivered a powered Z.P.M. recovered from ancient Egypt, which is used to power the shield, cloaking technology, and the doorway back to Earth when needed. But the one Z.P.M. cannot sustain the city's full operation.

Atlantis itself is a city ship capable of space flight, and originally resided on the surface of Earth, on the continent that became Antarctica. Between five and 10 million years ago the Ancients left Earth with the great city, bringing it to a planet in the Pegasus Galaxy. After a war there with the Wraith, the Ancients submerged the city in an ocean and returned to Earth through the Stargate. The city was found thousands of years later by an expedition team from Earth, led by Elizabeth Weir.

Upon their arrival, the city's systems detected the presence of the Earth team and began reactivating lights and power systems as people approached them -- depleting the overall power supply and shrinking the great shield that held back the water of the ocean in which Atlantis was submerged. Automated systems brought the city back to the surface before the shield failed, though this has left Atlantis vulnerable to attack. After some three years an Asuran attack forced the expedition from Earth to relocate the city to another planet, where it sat as an island in the middle of an ocean. More recently, it was relocated to Earth -- landing, cloaked, just off the coast of San Francisco.

Since Atlantis' Stargate is believed to be the only one capable of connecting to Earth in the Milky Way Galaxy, and to prevent the capture of the city by the Wraith, self-destruct codes were given to the officers of the facility. Two personnel are required to administer codes which will overload the naquadah generators, and effectively cause a 20 kiloton-equivalent explosion.

The arms of the city, as well as various other locales within, can be accessible via transport chambers. Atlantis includes numerous buildings of various sizes, with the center facility -- the control tower -- containing the Stargate. The city contains a variety of different resources, including:

Atlantis's Gate Room is massive, and suited for battalions of departing soldiers or enormous expeditions. A platform in the center holds the Stargate, allowing access from many different sides in the event of a medical emergency or abrupt evacuation by personnel. Stairs lead downward on either side of the gate, and an upward staircase directly in front of the gate leads up to the operations and conference rooms. Small terraces overlook the Gate Room on either side of the second level, and the ceiling retracts to allow access to and from the Puddle Jumper bay -- allowing the team to take the small Ancient ships through the Stargate.

Positioned across and above the Stargate area, the operations area is the control center of the entire Atlantis base. It is equipped with numerous control stations that allow for the monitoring and maintaining of the base. The Ancient's version of a D.H.D. is also in this room, allowing push-button dialing of Stargate addresses. From here personnel can also control the Stargate forcefield, consult the city's database of gate addresses, manage the city's power resources and city-wide communications systems, and more.

This room contains a large, three-dimensional holographic interface that allows users to view recorded information. The history of the Ancients, as well as their star maps, can be projected in this room by stepping on a panel in front of a display console, which initiates a preset program. The room's ceiling is perfectly configured for charting the position of Atlantis in the Pegasus Galaxy, as well as the worlds they seeded with human life many millennia ago.

Chief facility for tending to the sick and injured, which is also well-equipped for biological research. The room can accommodate multiple wounded, as well as base personnel's on-going biological and medical research. An adjacent room can also house recovering wounded.

Atlantis is equipped with a spacious, circular Puddle Jumper bay, filled with multiple decks of the small crafts. This room is located directly above the Gate Room. After selecting a Jumper, the pilot moves the ship into the center of the room, where panels on the floor retract into the surrounding walls to allow entrance into the gate room, so that the ship may be piloted through the Stargate. Ship controls can also retract the roof of the Jumper bay, allowing the ships access to the outside of the city.

A basic space with a large table, where the team conducts mission briefings and other meetings. The conference room is directly across the Gate Room from the operations center. A series of multi-panel doors open onto a terrace overlooking the Stargate.

Constructed with advanced Ancient forcefields, this rudimentary square space can house many foes. Not even Wraith are able to penetrate the forcefield barriers. Only when the chamber is unlocked do the forcefields drop away, allowing admittance for personnel.

Here, massive grounding rods channel lightning from the highest lightning rods, dispelling the energy back into the ocean. The grounding stations are designed in the event that lightning is needed to power the city, supplementing Z.P.M.s. Sophisticated terminals can separate the rods.

Like the Atlantus outpost in Antarctica a powerful chair-weapons platform is provided for defense of the city. The chair directly connects to Atlantis's three drone weapon portals on the city piers. The chair can also be reconfigured to remotely control Puddle Jumpers to attack incoming threats.

The heart of Atlantis is the Z.P.M. outlet room. At the center of this chamber is a triangular space where up to three Zero Point Modules can network to provide power to the city for thousands of years. Any Z.P.M. slot can run the city by itself, but the units can also take turns powering the city.

Deep under the city's spires exists an alternate control station that can perform the basic functions of the central spire's control room. The city's stardrive can be initiated from this location. However, it is not possible to remotely power down the Z.P.M. that is running the ship.

The drone storage bay houses an enormous supply, if not all, of Ancient drone weapons. The devices remain on stand-by in honeycomb-like racks until they are required to launch. This bay is likely configured for automatic launching of the weapons, routing the drones to three portals on three separate piers where they can emerge and attack.

The city ship employs a tremendous array of long-range sensors, allowing scanning of nearby star systems up to weeks away via hyperspace. Often used as an early warning system, the sensors permit the city's cloaking shield to activate before any threats come within scanning range.

Overlooking a pier of the city lies the mess hall, where Atlantis expedition members and their guests can take in a view of the city while eating a meal brought in from the Daedalus (locally in the Pegasus Galaxy). In the event of a chilly day, an enclosed space is also provided.

Whether designated by the Ancients or the Atlantis expedition, a gym has been laid aside for cardiovascular activity. Here, Teyla Emmagan regularly trains with John Sheppard, or other Athosians who have come in from the mainland for practice with their leader.

Atlantis can sustain numerous personnel. Since the Ancients themselves were human, accommodations could not have been more perfect for the members of the expedition from Earth. Some quarters hold multiple beds for multiple individuals, including families, to utilize the same room. However other quarters are smaller and suited for a single occupant.

There are also multiple scientific laboratories in Atlantis. Many of these facilities can be found just in the command tower; the city itself is largely unexplored, and it undoubtedly holds numerous Ancient technologies just waiting to be studied and used by the second generation of humankind.

Rising, Part 1 - Dozens of Earth's scientists arrive at Atlantis and begin exploring the new city.
Rising, Part 2 - After an issue with depleting power supply, the expedition members come to realize Atlantis -- newly risen to the surface of the planet -- will be their new home. Athosian refugees also resettle there after a Wraith attack.
Hide and Seek - An alien entity gets loose in Atlantis, putting its new residents on edge. A young Athosian discovers the city's transport chambers.
Suspicion - After Sheppard and Ford discover a nearby continent, the Athosians eagerly leave the city to resettle there.
Home - The expedition learns that Atlantis's Dial-Home Device possesses a specific, and removable, crystal that allows only the city-ship to dial Earth.
The Storm - As a massive hurricane barrels down on the city the Genii use this moment of weakness to gain control of Atlantis.
The Eye - Major Sheppard and Lieutenant Ford lead strike forces to retake the city from the Genii. Dr. McKay uses power supplemented by the lightning terminals to temporarily raise the shield and protect the city at the eleventh hour.
The Brotherhood - With long-range sensors activated the expedition team learns three Wraith hive ships are on their way to Atlantis.
Letters From Pegasus - Using Dr. McKay's innovative compression technology, Atlantis transmits data files back to Earth.
The Siege, Part 2 - Atlantis's personnel is reinforced by manpower and supplies directly from Earth, just hours before Wraith Darts fall from the sky and attack the city.
The Siege, Part 3 - The Earth ship Daedalus arrives and helps defend Atlantis from armadas of Wraith hive ships. The expedition fakes the city's destruction, cloaking Atlantis just after a bomb is dropped above the shield.
The Tower - Another city, the same dimensions as Atlantis, is discovered on Eldred's planet. Several Puddle Jumpers and this city's supply of Ancient drones are returned to Atlantis where they can be put to use.
First Strike - Under an unstoppable attack by an Asuran satellite weapon, the team sinks the city to buy more time. But the only way to save Atlantis is to launch the city and seek a new home planet.
Adrift - The team works on one task after the next to desperately try and keep the city alive, drifting in deep space with little power remaining.
Lifeline - With a new Z.P.M. stolen from the Replicators, Atlantis lands in the ocean on its new home planet.
The Seer - When a prophet visits Atlantis, he shows Colonel Carter a vision of the city being destroyed by a Replicator warship.
This Mortal Coil - A duplicate of the city, created by rebel Replicators, is destroyed by Replicator ships sent by Oberoth.
Enemy At the Gate - Realizing the Wraith are about to attack Earth the team decide they have to fly the city home to help in the fight.