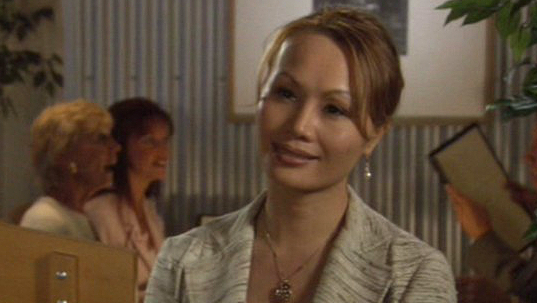 Former wife of Hank Landry, mother of Carolyn Lam. Kim was married to Hank for 12 years. The two's divorce was attributed to his unrelenting focus on work. Landry himself admits he missed birthdays, anniversaries, and even his daughter's graduation. Following the separation a period of time passed where the two did not speak for five years.

During a visit to Colorado Springs, presumably to see her daughter, Kim opened up to the chance to have dinner with her former husband. Uncharacteristically, he made it to the event -- though late -- but she was more than satisfied with the fact that he had shown up at all.

Family Ties - With the help of her daughter Carolyn, Kim Lam agrees to dinner with her former husband, Hank Landry.