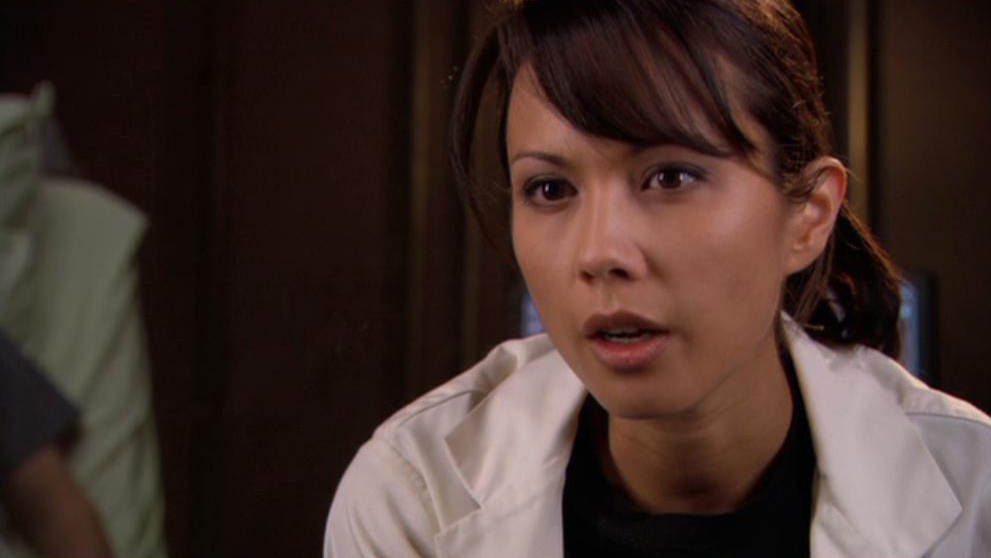 Stargate Command's chief medical officer, Dr. Carolyn Lam is a civilian given the plum appointment by General Jack O'Neill himself. She is General Hank Landry's daughter, and arrived on the base soon after he took command. Their relationship has been strained for years, and she has implied that she might have turned down the job had she been told that Landry would be in charge.

Carolyn maintains a relationship with her mother, Kim Lam, from whom the General is separated. As a child her father was often gone, often unable to tell her and her mother about what he was doing, because of his line of work. It's something that drove a wedge between them from a young age, and that Carolyn is only now beginning to understand now that she herself works at a top-secret government facility. After serving with him for two years, Carolyn's relationship with her father was markedly improved.

Lam replaced Dr. Janet Fraiser more than a year after Fraiser's tragic death in the line of duty.

Avalon, Part 2 - Dr. Lam monitors Daniel and Vala, whose consciousnesses have been sent to a distant galaxy by an Ancient device.
Origin - Lam fights for the safety of Daniel and Vala when Landry and Mitchell suggest destroying the device that has incapacitated them.
The Ties That Bind - Lam takes care of Daniel, who falls unconscious after Vala Mal Doran leaves the base.
The Powers That Be - Lam goes offworld to aide the people of P8X-412, who have been stricken with a plague by a Prior of the Ori.
Babylon - Dr. Lam saves the life of the Sodan warrior Volnek, but cannot save his larval Goa'uld symbiote.
Prototype - Lam examines Khalek when SG-1 brings him to Stargate Command, and determines that he is highly advanced.
The Fourth Horseman, Part 1 - Dr. Lam diagnoses a Prior plague at Stargate Command, but is unable to stop it from spreading and threatening all of Earth.
The Fourth Horseman, Part 2 - When her father is infected with the seemingly incurable Prior plague, Carolyn confesses that she now understands why he was so distant as a father.
Ripple Effect - When a duplicate copy of SG-1 arrives through the gate, Dr. Lam helps to determine that they are from a parallel reality.
Talion - Dr. Lam cares for a gravely injured Bra'tac after a terrorist attack on a Jaffa summit leaves many dead.
Family Ties - Carolyn convinces her father to have dinner with her mother, Kim, when she comes to town.