Again, we don’t even know yet what it’s going to look like in a fire fight. If somebody’s getting sprayed with a machine gun do we need to do another animation for that, or can we use some of ours tuff and combine it, blend it? That kind of thing. It’s all about getting the best quality in the time allotted.

GateWorld: Well as long as you’re well underway at this point.

GW: Good. Why do you think Stargate is worthy of an MMO?

CC: Oh, the same reason that it makes a great TV show. The Stargate. It’s an instant story. You can go unlimited places and you can always have something new and cool. Even though they’re always going back to the same place, a home base, they’re going out and you never know what’s out there. You can have these overall story arcs that are huge that encompass the whole galaxy, but you can have an isolated story just on a little planet.

A lot of MMOs, you have forests, mountains, plains, desert. Here we can have alien planets. You can be a short trek away from not only a whole different area but a whole different planet. A whole different species of monsters or people. A different color of sky. Planets. Different solar system. It opens it up visually, at least, for tons of cool stuff that other MMOs, I think, don’t have. Story-wise it’ll be easier to direct players through their own individual stories by using the gate.

CC: Right! Right. So you can lock off places and then they can go to certain places, and you can have a more immersive story that way.

GW: So it’s not just a matter of, like the NPC would say, “I believe it’s in the north east” and you go and discover the country. Instead, “Here’s an address, dial it, go.”

GW: Is there anything unique about working on this particular project as opposed to the ones you’ve done in the past?

CC: It’s unique because this is one of the first things I’ve worked on that anybody’s heard of, so that’s cool. It’s the biggest project I’ve worked on, and it’s the most impressive company I’ve worked with, besides the one me and Howard had. But that was five of us.

It’s a big deal and it’s exciting. People have heard of it. Since I’ve really gotten attached to the show and the characters it’s exciting to be part of that universe and adding some content to it. It is a first time for me for those reasons.

GW: What are some of the challenges you face day to day?

CC: Part of that is the management thing. It’s bouncing, trying to keep my animators busy and keep working myself, but also get all these important decisions that need to be made underway. These are always dependent on other departments and people. I need to hear what they want and what they think. So it’s a challenge every day to really press on even though they’re still unknowns.

GW: You keep getting pulled away for meetings. There’s really no way to have a real, “I’m in my groove now.”

CC: I think I have a bunch of meetings, but I know Howard and a bunch of the other guys — so I shouldn’t probably even complain. But yeah, that is a challenge. To keep progressing while these decisions are being made simultaneously.

CC: Oh yeah. I mean, I’d like to do all of it! No. I think it’s great to be able to balance out who’s doing what. Everybody has something they don’t want to do. Sometimes if it’s stuff that I don’t want to do somebody else will want to do. So we can all be happy pretty much all the time. I think that’s a great part of it.

But no, I don’t actually get to do as much as I’d like. It’s a trade off. I do enjoy making those decisions and helping the game along with my opinions and the way I think it should look and feel. And adding that to it. I wouldn’t get that chance if I was just animating all the time.

And I enjoy scheduling because I’ve worked in games a while. There’s a lot of crazy management choices that some game companies make with scheduling and crazy hours. Ever since I’ve been able to help with scheduling, I’ve tried to make it so that doesn’t happen, and help to schedule deadlines we can meet. It’s awesome to be able to have that kind of input as well.

But yeah, it ebbs and flows. There’s always the week where “Alright, once I get all this stuff done I can animate.” I’m looking forward to it. But there are some days that go by where I don’t get to do the animation.

CC: The best references for me, with just natural movement where I start, fundamentally, I just walk around. Or I do the action and keep track of what my body’s doing and how it feels.

If we need to go to the next level we have a camera. We can film reference each other doing a certain motion and keep track of what’s going on, go back to that and use it. But generally we just do it. I’ve done a lot of these things, a walk cycle, a run cycle, stuff for games. You can start with what’s in your brain. I’ve walked it enough. But if it’s a specific character or if I’m really having a problem with it, then yeah. 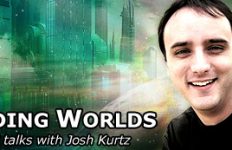