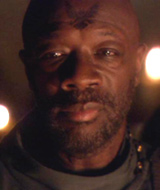 UPDATE: Hayes’ official cause of death is a stroke brought on by chronic hypertension, E! Online reports.

Hayes was found at home by a family member, according to the Shelby County Sheriff’s Office. He was pronounced dead about an hour later at Baptist East Hospital in Memphis, the cause of death not immediately known. He was 65.

In addition to his inestimable music career, which included the famous “Theme From Shaft” in the 1970s, Hayes provided the voice of Chef on the animated series South Park.

He was also a Grammy and Academy Award winner, and was inducted into the Rock and Roll Hall of Fame in 2002.

He entered the Stargate universe in 2005, playing Tolok in Season Eight’s pivotal, 3-episode arc “Reckoning” (Parts 1 and 2) and “Threads.” He also narrated the short segment “Teal’c P.I.” in the show’s 200th episode.

(Thanks to Kelly for the tip)