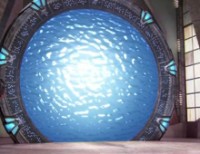 The SCI FI Channel has high hopes for the future of the Stargate franchise, as Stargate Atlantis enters the home stretch this year. In addition to continuing on Atlantis in movie form, the network has green-lit production on the third series, Stargate Universe (story).

SCI FI has also picked up the rights to air Stargate: The Ark of Truth and Stargate: Continuum, two SG-1 movies that bowed on DVD this year with great success.

For the Stargate franchise to enter a new era and attract a new audience, however, network president Dave Howe believes that Universe should update its storytelling for a new generation.

“What we endeavor to do each time is to introduce the franchise to a new audience, make it a bit more contemporary, more relatable,” Howe told Multichannel News this week. “The ambition with Universe is to skew it younger than the previous two chapters and fill it with a fresh-faced cast; and a storytelling that is more for the late 2000s than it is for the 1990s.”

Howe also wants Stargate Universe to help fill the “space opera” gap left when network jewel Battlestar Galactica goes off the air next spring. While of course Stargate will never be the dark and brooding character drama that Battlestar is, Universe might be a little more so than SG-1 or Atlantis.

“As a network, obviously we look at Battlestar Galactica, that’s set the standard in terms of tense character drama. Stargate does not have the intensity of a Battlestar Galactica. But it may well be somewhere in between. Brad [Wright] and Robert [Cooper] are very eager to keep the action and adventure and the sense of humor [in Stargate Universe]. But I think there’s an opportunity to maybe inject a bit more dramatic intensity into the series. But that’s obviously a conversation for them as they start to script and move into development.”

Wright and Cooper are currently writing the script for the spin-off’s first episode.

Howe is equally positive about Stargate Atlantis leaping to the movie format. “I think these things lend themselves to a bigger, kind of high-production-value, two hour event, which is great,” he said. Howe also recognizes the passion of the show’s fan base, which has been flooding his e-mail box since the show’s cancellation was announced on Thursday.

“There’s obviously a passionate audience for Atlantis and the characters of Atlantis,” Howe said. “And yes, they’re absolutely going to continue in the movie franchise. But people need to mourn for a while and come to terms with it. I don’t anticipate that that will subside quickly. But once Universe is on air and they have kind of their next fix of the Stargate franchise, I think hopefully people will realize that it’s in safe hands at SCI FI, that we really value this franchise and it’s in our interest and the fans’ interest to let us continue the story and figure out how to retell it for a new audience every few years.”