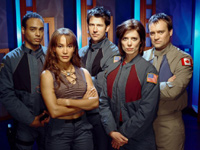 It’s going to be “all Atlantis, all the time” for the SCI FI Channel, which will bid farewell to one of its longest-running, signature shows on Friday, January 9. The cable network will run all-day marathons every day of the week leading up to the final episode, according to SciFi.com.

The first marathon is scheduled for Friday, January 2 from 8 a.m. through 3 a.m., with the exception of two hours set aside for Sanctuary (10 p.m. and 12 a.m.). This includes the first new episode to follow the holiday break, when “Vegas” is expected to make its U.S. debut at 9 p.m. (8 Central).

Four 11-hour marathons will air the following week, from 8 a.m. to 7 p.m. on Monday, Tuesday, Wednesday, and Thursday.

On Friday, January 9, a 13-hour Atlantis marathon leads up to the premiere of the final episode of the television series, “Enemy At the Gate,” at 9 p.m. (8 Central). Another two episodes will air at 1 a.m. and 2 a.m.

All times are Eastern and Pacific.

The network hasn’t announced just what episodes it will be airing in the marathons yet, but with some 75 hours scheduled (excluding repeats of “Vegas” and “Enemy At the Gate”), it is going to make it through most of the 100-episode series. The network may have to skip Season Four due to rights issues, since those 20 episodes are currently airing in the U.S. syndication market.

Stargate Atlantis premiered on SCI FI on July 16, 2004, and was the cable channel’s highest rated original program ever at that time, with a 3.2 Nielsen rating.

SCI FI is planning to air an all-new Stargate Atlantis TV movie later in 2009, which will also be available on DVD. If it is a hit, look for an on-going series of movies featuring the continuing adventures of John Sheppard and his team.

In addition to the week-long marathon, watch GateWorld for some very special Atlantis farewell features in January!