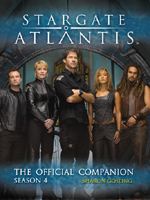 UPDATE: The publisher has notified us that this book will be available November 11 in the U.S.

UPDATE 2: The Season Five Companion is also available for pre-order, with a May 2009 release date.

Stargate Atlantis: The Official Companion Season 4 is coming to bookstores this month! The fourth installment in Titan Books’ popular series covers the 2007-2008 season of Stargate Atlantis, of course, and is set for a November 11 release in the U.S., and November 28 in the U.K.

Titan has been publishing companion guides to Stargate since the very first season of Stargate SG-1.

The book will sell for $14.95 U.S. and £9.99 U.K., but is currently on sale for more than 30 percent off at both Amazon.com or Amazon.co.uk. Pre-order the book now and support GateWorld with your purchase!

The Official Companion for the fifth and final season of Atlantis is currently listed with a late May release date, and is also now available for pre-order at Amazon.com.

NEXT: The complete press release