Beware of SPOILERS for Season Five’s “Whispers” in the report below.

In a bit of a “Rowlingesque postscript,” Stargate Atlantis producer Joseph Mallozzi revealed on his blog today that the show has already introduced its first gay character. But that revelation, along with other character development scenes, hit the cutting room floor.

“In the first draft of ‘Search and Rescue’ with the introduction of Captain Alicia Vega … in the episode’s final scene, essentially asks Keller out. The prospect of introducing a gay character to the Stargate universe was always an interesting possibility, but one that would require the right circumstances. … The character of Alicia Vega [offered] an opening that an established character did not: she was new and the final scene of the season five premiere felt neither forced nor insignificant.”

Played by actress Leela Savasta, Vega was introduced as a new arrival on Atlantis in the original script for the fifth season premiere. The episode was originally to open with Vega speaking to Colonel Carter about the fact that she had not yet been assigned to a team, and would end with her settling in and trying to make friends.

In the final scene of “Search and Rescue,” Alicia encounters Jennifer Keller in an Atlantis corridor and strikes up a conversation. The additional scenes with her character were apparently even filmed, but cut when the episode ran long.

The character was intended to be recurring, but was killed off in just her second appearance (the Mallozzi-penned episode “Whispers”). 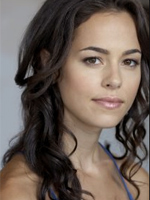 But there is someone else on Atlantis who is gay, in Mallozzi’s mind — though circumstances have never provided a way to reveal it without being forced.

“For several years now, there has been one recurring character who, in my mind, is gay but there has never been an opportunity to confirm the fact,” he said. “While I feared that suggesting it in a throw-away (‘I’m heading back to Earth to spend time with my boyfriend. See ya!’) would seem like a truly forced, WTF moment for fans, alternately, making a big deal of it felt wrong as well.

“So, unless the right circumstances present themselves for this character, the fans can simply go ahead assuming he is heterosexual until such a time that, in a Rowlingesque postscript, I can add: ‘And, oh yeah, by the way — he was gay.'”

The floodgates of fan speculation are no doubt open for business. An Atlantis recurring character who is male. Does Mallozzi have Zelenka in mind? Or perhaps Major Lorne? Or Chuck the technician?

New episodes of Stargate Atlantis air Fridays at 9 p.m. (8 Central) on the SCI FI Channel in the U.S.