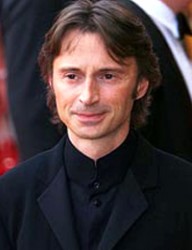 Beware of minor SPOILERS for the premiere of Stargate Universe in the second half of this report.

Stargate Universe is currently in pre-production, created by Stargate SG-1 and Stargate Atlantis producers Brad Wright and Robert C. Cooper. The show begins filming in February and will premiere with a 2-hour event next summer.

A 20-year veteran of film and television, the 47-year-old actor hails from Glasgow, Scotland. He studied acting at the Glasgow Arts Centre and the Royal Scottish Academy of Music and Drama, and co-founded the Rain Dog theatre company in 1991, according to the Internet Movie Database. He is married with three children.

“We are very excited about having an actor of this caliber, around which we can build a strong, character-based series,” Wright and Cooper told Entertainment Weekly. “Robert Carlyle will engage a broad audience and we hope to deliver a show that demonstrates to new viewers that the loyalty of longtime fans of the Stargate franchise has been well-deserved.”

“We see SGU as an innovative step forward and an opportunity to expand the franchise.”

“We couldn’t be more excited to set Robert Carlyle for Stargate Universe,” SCI FI Executive VP Mark Stern said. “He brings a depth, intelligence, and complexity to his roles, which will fit perfectly with the fresh, new reinvention of this franchise.”

Among Carlyle’s most notable films are “Trainspotting,” “The Full Monty,” “Eragon,” and the horror flick “28 Weeks Later.” He played Adolf Hitler in the TV biopic “Hitler: The Rise of Evil,” and appeared in the Bond film “The World Is Not Enough.” Most recently, he starred as Carl Benton opposite Kiefer Sutherland in the TV movie 24: Redemption.

Carlyle has been rumored to be in the running to take over the role of Doctor Who when fellow Scottish actor David Tennant departs that show next year.

NEXT: New details about the show