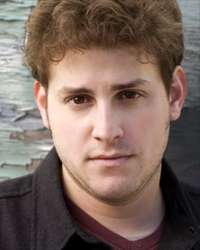 Actor David Blue is moving from ABC’s Ugly Betty to SCI FI’s Stargate Universe! Blue has been cast in the new series as Eli Wallace, according to Entertainment Weekly’s Michael Ausiello.

Formerly named Eli Hitchcock (now the fourth main character to be renamed since early casting documents were released in September), the character is described as “a total slacker who just happens to be an utter genius with anything he puts his mind to — mathematics, computers, video games. A lack confidence has left him with an acerbic sense of humor.”

Born on Long Island, New York, 29-year-old (30 on Saturday, according to Wikipedia) Blue studied at the University of Central Florida. In addition to his acting talents, he is also skilled in tap, jazz, hip-hop, ballet, and is a champion swing dancer.

The actor has appeared in seven episodes of the ABC hit comedy, according to the Internet Movie Database, playing Cliff St. Paul. He has also appeared on Moonlight, Scrubs, and Veronica Mars.

Blue will join Robert Carlyle (“Dr. Nicholas Rush”) and Brian J. Smith (“Lt. Matthew Scott”) and others still to be announced when filming begins early next month. Check out his official Web site at David-Blue.com, and learn more about SGU in GateWorld’s Launch Center!

(Thanks to Joe Passmore, Daniel, Becky Truitt, Kaylee and Morjana for the tip)

PS: You can’t just automatically be a “genius” at something. If he is extremely proficient in certain areas he would have had to work hard and study in them. It takes a certain amount of virtuosity to be a genius. This common archetype of the lazy genius geek is really nonsensical.

Looks like all the fears of characters all being in early 20s are unfounded. I think SGU has the potential to be a great show.

I loved this guy on Ugly Betty! I’m excited

I thought he was wonderful on Ugly Betty! I was freaking out that he might not be back. I’m ok now that I know he’s on Stargate. Plus, that makes another actor who’s over 25. I think it’s safe now to put the annoying Stargate: 90210 theories to rest.

Oh, how original and diversified. He was a genius vampire hacker and computer geek on Moonlight, and here he is on Universe. C’mon, make it original at least: A computer geek vampire, member of an SG team stranded on an Ancient ship. Don’t tell me the idea doesn’t make you smile. Admit it, you’d like it! In my opinion, there hasn’t been enough vampires in Stargate and besides, if we don’t bring vampires, they’ll have replicators in every galaxy again, as in SG-1, Atlantis, and the DVD movies. Vampires > Replicators

AutumnDream is exactly right. Being smart and being good at something (especially computers) are two very different things. The “lazy genius” persona is absurd.

This guy has the most goofy and ugly haircut I’ve seen in a long time. I hope it gets cut for the show.

Goofy hair can be good for a character – think Shep! Teh Hair Forever!

Damn Universe is taking all the good cast from every show. Universe might be a hit after all…

I just hope he is straight and not sad person, LOL. Never saw him before, but boy… give us a REAL geek. Otherwise I want my lovely Rodney back.

I love David Blue! What a great choice, give him a chance, he’s awesome!

I was being sarcastic the whole time. I just find it amusing that his character will likely be almost the same as his persona in Moonlight. “Likely” is the keyword here, I guess we’ll see.

This actor David BLue looks really goofy. I hope he grows a beard to match that hair, but the time filming starts.

Anyway, so how many doctorates does this character of Eli Wallace hold and what is his specialty???

David Blue has wonderful comedic timing, he’s going to be a great addition. He’s not goofy, or sad and glum by any means. It does sound “likely” that his character is much like that in Moonlight, and that’s ok with me, he pulled off that role handily. If people give him a chance, I think you will like what you see. :-)

This guy looks lost. Hell no!

omg thats all i got to say