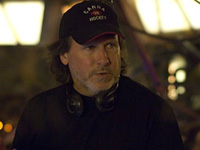 Andy Mikita has been tapped to bring the first Atlantis movie to life. GateWorld recently caught up with the long-time Stargate director to discuss the assignment and Atlantis‘s cancellation.

“It was Paul Mullie who had originally mentioned to me they were still uncertain as to whether or not there was going to be a Season Six of Atlantis,” Mikita told us. “At that time even when it was up in the air he knew that they were going to be writing a long form.

“Whether that long form was going to take the shape of episode one and episode two of Season Six, or if the show was to get cancelled then as a direct-to-DVD film like Continuum and Ark of Truth, he would very-much like me to be the guy to hold the reins for an Atlantis movie.

“So that was a very exciting opportunity that he’s presented to me and I’m super excited to be able to do that.”

Very little information has been released about the upcoming film, and Mikita admits he’s almost as much in the dark as the fans. “I can’t wait to see or hear of any news about it,” he said. “I haven’t seen any kind of a script at this point. I think the guys are still at the outline stage. There’s not even a working title to my knowledge.

“At the last I’d heard it was outline stage. Perhaps during the holidays here the guys have actually been starting to write. I’m not too sure, to be honest with you. All I can say is I cannot wait to have a look at it. It’s so exciting for me because it allows me to keep my life with Atlantis alive.”

Many fans have been very vocal about losing Atlantis, feeling like it has been exchanged for Universe, despite contrary comments from the producers. “I can understand and appreciate where they’re coming from,” he told us. “We were all saddened by the cancellation. There was no question about it. We were really starting to feel like it was really finding its legs.

“I know [in] a lot of the fan base there was a split amongst the fans somewhere really feeling the last couple of seasons were the strongest. But others I’d read they were feeling the other way, that it was going the other direction. So I suppose for that side of the camp perhaps it’s a good thing.”

Stay tuned for a special, two-part audio interview with Andy Mikita this weekend!

Cool. Andy Mikita directing. Thats almost as good as Martin Wood directing. Now whose writing it is what I’m worrying about. And I also agree with Kenneth. Lets keep the romance at the back door and refocus on the characters. Something like the first two epeisodes of Season Four would be awesome. Character driven, action packed, lots of techno babble from McKay!! That’s what I called good television. As for television now without Atlantis….all I can say is THANK GOD for dvd’s!!

But I liked where they were going with Jennifer and Rodney. It made for a real “Human” episode. I liked identity, but I really liked Brain Strom. Don’t you ever wonder what happens to all that stuff that filters out of the stargate program. People taking credit for other peoples work who for various reasons can’t publish. That happens all the time in the real science circle.

.. Maybe the first sign there will be a DVD sooner than later.

I like Andy Mikita and his work. This is a good thing, IMO.
I agree with above posters who say no romance in the movie, that was a pretty bad direction for the show to go in it’s last season. Hints of romance, sure, but Full On Frontal Assault Romance like McKeller – not so much. Hopefully there won’t be much time in the movie for that kind of stuff and the action, humor and Team bonding will prevail!

He adds value to any story told, good thing.

Sure sci fi has to be about cold hard facts or blazing special effects I’m known as a real geek, I read 1 or 2 quantum physic books a month the way some people read adventure novels, And the more equations the better. can’t stay interested in a computer game more than 5 minutes without using a code debugger to figure out how it works. But… I also enjoy a good romance story. I brings the story closer to home, more “Human”. Some of stargate sg1’s best stories were very emotional, Sam and Jack, Sam and her father. four elements… Read more »

I totally agree with you Michelle. Take any of those out, and it won’t be SG anymore.

yay, atlantis is going back to pegasus. hope its not a replicator story or asgard, those stories are boring. the writers should stick with ancients, wraith, hybrids, and human enemies like the genii

Romance sucks on this show. Team bonding is where it’s at.

Don’t get me wrong. I love a good romance story. Yes, some of the better stories involved Jack and Sam’s “tension” but I loved it that they didn’t full on ship em together. Their stories were more hints and innuendo’s then full on “Their together!” We had to draw our own conclusions as to their relationship and still do! Thats what makes it fun! I’d rather see the tension build between characters and read between the lines. More fun that way for me. It’s like trying to figure out a good puzzle. I’d rather get to the answer myself then… Read more »

I’m glad that Andy is directing the movie. His audio commentaries are always so interesting and not as technical as Martin Wood’s.

I think Andy is a great choice. And I agree the full blown romance needs to stay out of the Movie. I have never liked Keller and kept hoping in Identity they would kill her off. I suppose I would have like the Character better had Keller casted as someone else.
I just hope in the movie they get back to what made Atlantis its own.

genii, they are like a bad Indiana Jones story, Michael , my least favorite story line. I thought the replicators were interesting, they were somewhat like the borg in startrek but a little more interesting. The idea of creating machine intelligences to suplement humans and losing control has been a staple in sci fi for some time. The best example are the Mechs in Gregory Benson’s Novels. this may be were humanity is going.. My personal opinion this is a phase any reace that gets past its infancy goes through A few thousand years of huminoids becoming more and more… Read more »

Kara Sheppard – I couldn’t agree more! McKeller was too obvious, and not romantic at all, whereas Sam and Jack’s feelings were so subtle, but still there, and that made it interesting I think. To know they have feelings for each other and they can’t express them, and those little hints, no more that the look in their eyes… Perfectly done :) If the same concept would be used in Atlantis film, I wouldn’t mind at all =)

hey, it sucked when the replicators were gone. its just they dont belong in a season 6 if there was one.

Please bring back the series, It was the discovery of new things that hooked me not the relationship junk like SGU had.