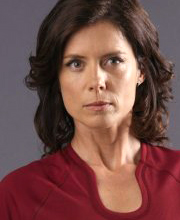 All week long we’re counting down to the series finale of Stargate Atlantis, airing Friday night on SCI FI Channel in the U.S.! Five seasons, five days of marathons on SCI FI, and here at GateWorld it’s our favorite five episodes for five Atlantis team members. Today we look at the best of Dr. Elizabeth Weir! Come back tomorrow for our favorite five McKay episodes.

When Atlantis began pre-production late in 2003, the producers had already cast the role of Dr. Weir. The character — an experienced linguist and successful international diplomat — had been introduced in the recently aired SG-1 season finale, “Lost City.” But rather than bring actress Jessica Steen into the spin-off series, the producers chose to recast the role with Ontario native Torri Higginson. After studying at London’s Guildhall School of Music and Drama, Torri appeared in a wide variety of TV series and movies — notably, for sci-fi fans, the movies and short-lived television series based on William Shatner’s “TekWar” novels.

Elizabeth was a complex balance of strength and confidence on the one hand, and vulnerability and disquiet on the other. When she was written off the show in 2007, fans of the character mourned (and petitioned). But Torri and Elizabeth leave a terrific legacy that will forever be a part of Stargate history. Here are our five favorite episodes:

From Day 1 Elizabeth was a strong and capable leader of the Atlantis expedition, but her personal issues are forced to the forefront when the Ancients return to their city and ask the team to leave. They resettle back on Earth, but Elizabeth finds returning to her old life unsatisfying. After Atlantis, how can any other job measure up? She works on her memoirs (which she admits could probably never be published) and stays mainly to herself, even avoiding contact with her friends from Atlantis — until Carson Beckett comes calling and encourages her to join them for dinner.

When they learn that Atlantis has been taken by the Replicators, Weir joins the team in defying orders, stealing a Puddle Jumper, and returning to the Pegasus Galaxy. After years of responsibly following the mandates of Stargate Command and the I.O.A., it is nice to see her demonstrate her priorities with a little defiance.

ghost in the machine? maybe not. But the rest are great!

Go Elizabeth! I’m pleased with GateWorld’s choices, and pleasantly surprised that they didn’t do The Long Goodbye. Because though it had some good action (and that kiss!) it wasn’t Lizzie after all. ;)

Thanks for this–I really miss Elizabeth’s character. I agree with all the choices, though I think the Ghost in the Machine Elizabeth is the ‘real’ Elizabeth, not a copy. If I remember correctly she explains that she was fully assimilated by her nanites after Oberoth takes her captive in “Lifeline”. And though it was a great story (kudos to Michelle Morgan) I can’t honestly say I agree that it was a fitting conclusion–it will always break my heart that the character’s ending was written as it was.

I was surprised at how much I missed Weir’s character when she was gone. I never was that happy with how she was written, as they never seemed to know what to do with her. But she sure had chemistry with the rest of the cast, and it’s sad to see the writers couldn’t find anything good for a strong woman character like Weir.
I did like The Long Goodbby, it showed Torri’s range. But The Real World has got to be among my least favorite episodes ever done on Atlantis.

Before I Sleep, The Eye/Storm, Lifeline and Adrift.
I never liked Real World, and I don’t think Ghost in the Machine really counts.

As I sit here watching the marathon, I too am finding it hard to watch episodes with Torri because it reminds me how much I miss her character. Her chemistry with the rest of the cast was great, and I thought she did a lot with what little material she sometimes had. I am also still irritated with the way SF replaced her, and then tried to get her back a year later. Which makes the selection of “Ghost in the Machine” a very poor choice IMO. Nothing against Michelle Morgan, she did a great job. But that was written… Read more »

Ghost in the Machine would have been an outstanding episode if Torri H. had been in it. Her scenes with Shepard and Teyla would have had more emotional weight.

Was such a shame they decided to kill off the character, Atlantis just isn’t the same without Elizabeth!

ghost in the machine should have top1 and the real world certainly shouldn’t be on any top5 lists because it was crap. Then again, I guess there’s not much to pick from if you’re looking for ‘Weir’ episodes lol

Atlantis seemed to have gone down hill after the sudden writing out of Elizabeth and Carson… a note to the writers: DON’T kill off fan favorite main characters!

Actually Season 4 was the best season of Atlantis, because there were very little stand alone eps, there was a lot of drama of lost and returning characters. You felt these characters pain losing their friends while trying to save an entire galaxy from a war between two enemies of Atlantis. I do wish Weir stayed on recurring for Season 5 like Carson did, she really added a lot to the show. Season 5 has been great but has been missing a little spark from Season 4, and one of those is likely Weir. Eps like “Adrift”, “Lifeline”, “Doppleganger”, “This… Read more »

Lifeline and Before I Sleep were definitely the best. I do have to say that Weir was my least favorite character. I agree the writers didn’t really know what to do with her character and I was happy when they wrote the character out.

Well, I really didn’t like TRW much, it kind of bored me, but I can understand why its in this list. I rank Lifeline much higher though, and probably would throw First Strike into the fray. It was a great character ep for Weir.
*sniff* I do miss her :(

While the Real World was Weir heavy, and we get Jack in it, I would have put that further down on the list. Weir has good moment in many episodes, but I can’t think of a better replacement, though.

I do miss Wier, i always felt like she was the voice of the city.

my number 1 was the real world,
i really mis weir :( i almost cried when we lost her at the replicator world,
and my heart was broken when i heared, NO MORE WEIR ! :(
i still mis her!, it is hard to watch the show without her :(

elizabeth was the heart and soul of the city, thanks for including her, especially since i got the impresion that the new producers of sga don’t really appreciate her. they better fix things in the movie, the ending of ghost in the machine was terrible :((

miss weir so much =((
nice choice of epsodes, but i think the long goodbye and no man’s land belong on that list , too

I can agree with kitty, she IS the great leader who found the great city of the ancients, she kept it intact and untouched for 3 years / seasons
the new leaders are screwen around a bit :P
when i saw the gost in the machine,
how it ended, i cried :( !!!!!!

and yes dana, those were good as well ;)

My top five would be Before I Sleep; The Long Goodbye; The Real World; Lifeline; and Be All My Sins Remembered. Actually make that a top six because Progeny was a good Weir one too. Ghost in the Machine is an excellent story but without Torri in the show I couldn’t put it up there.

Thinking about the episodes made me realise they didn’t utilise this character as much as they could have … but then I guess the leaders have never had that much airtime!

Please replace Be All My Sins Remembered in my list with This Mortal Coil – it’s past 3am here and my brain is screaming out go to bed already!

“GHOST IN THE MACHINE”….not Weir….at least not best of Weir for me. Torri was SO amazing. I miss her terribly. She was my favorite character…and so many good ones like The Long Goodbye and Progeny were so much better.

i agree with McKayManiacs92 ghost in the machine not weir. torri is brilliant i totally mis her

If ghost in the machine is not Weir because Higginson didn’t play her, then Weir is in none of the Atlantis episodes. Jessica Steen is the only Weir in that case.

Thanks for the shout out to Wier’s top five episodes. Stargate Atlantis was never the same after she left. But I have to say the Woolsey has grown one me this last season.

“Ghost in the Machine,” the episode that violated Weir’s memory and was painfully, horrible OOC as one of her top episodes? Are you friggin kididng me? The Weir on the show for the first 3 seasons (before Joe Mallozzi took over) would have done anything to protect the city, including dying. And the episode where she leads a bunch of Replicators straight to Atlantisand nearly destroys it is the one you describe as “fitting ending”? THe one that ends with her floating dead in space? That’s what you call a “top episode”? Give me a break. I’m GLAD Torri refused… Read more »

Gitm shouldnt be on the list but I guess she was meant to be Weir. Not much of a Weir fan and The Real World was probably the worst Weir episode and turned Weir into such a boring character. The only episode I would have liked to have seen on the list was The Long Goodbye. Probably the only Weir focused episode I enjoyed. She really kicked ass there. Adrift was another good ep for the character.

Ghost in the Machine? LOL is this a joke? Torri is the actress that defined Weir. Its silly to put a second choice replacement in the top five.

I really wished that they had not killed Elizabeth Weir off. I thought that her character was great, since she was an amazingly strong leader. I don’t think that the writers gave her a big enough part though- her character, especially with Torri Higginson playing her, had so much more to offer.

The episodes where she had the main part in were all amazing!

Killing Carson and Weir was the begining of the end. Why this was done GOD knows!!! Weir was the glue of Atlantis she kept them all together and she had that special relationship with Sheppard they balanced each other out the diplomat and the ever so maverick military man. It was never there with Carter as she out ranked him, dont get me wrong I love Carter but the chemisrty just wasnt there and Wosley well again Richard Picado great but WHAT exactly did he EVER do!! I miss Weir from the shows and I fully understand why she didnt… Read more »

I will never, ever understand why they killed this wonderful character, killing in this way also Atlantis itself, because Samantha Carter first and Woolsey then didn’t bring anything new to the series and were both bad leaders. I’m so pissed at the writers for this horrible choice, not to mention the Ghost In The Machine episode, which made me pissed more than ever. And now that I’m waiting for Stargate Extinction, the thought that Weir will not be back, I want to scream “are you mad or what”? Weir was the soul of Atlantis and kill her character was the… Read more »