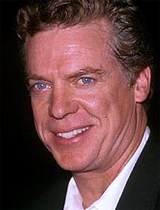 In a final bit of Stargate Universe casting news this week, veteran actor Christopher McDonald has been cast in the role of Senator Armstrong — a pivotal guest character in the series premiere, “Air.”

A 30-year veteran of film and television, you may recognize him as Quiz Show host Jack Barry, Happy Gilmore‘s nemesis Shooter McGavin, or Veronica’s ex-husband in Veronica’s Closet. But to us he’ll always be Lt. Richard Castillo in one of the best Star Trek: The Next Generation episodes of all time, “Yesterday’s Enterprise.”

He’s also played Ward Cleaver in the 1997 Leave It To Beaver remake, ridden The Perfect Storm in the 2000 George Clooney film, and lent his voice to Jor-El in the animated adventures of Superman.

“Another experienced Hollywood veteran, Chris brings gravity and charisma to the role of Senator Armstrong,” consulting producer Joseph Mallozzi wrote on his blog. “When I was on set the other day, he approached me, shook my hand, and told me how happy he was to be working on the show. A class act.”

The Senator is the father of series regular Chloe Armstrong (Elyse Levesque).

Mallozzi also revealed that actress Ona Grauer will return to Stargate, in “some heartfelt scenes” with Justin Louis (“Colonel Everett Young”). She originally played the Ancient Ayiana in SG-1‘s sixth season episode “Frozen,” and in the opening scene to Atlantis‘s “Rising.”

Louis’s character is married, but is forced to live apart from his wife when he is assigned to command a secret off-world base. Could Grauer be playing Young’s wife back on Earth?

Stargate Universe is now filming in Vancouver, B.C. for a fall premiere in the U.S. Learn more about the show at our Stargate Universe Launch Center, and check out the newly completed cast of characters!

(Thanks to kennythwraith for the tip!)

I love Ona Grauer, I really do. But can we, I don’t know, stop recycling actors?

As long as they make her look different. I don’t like recycling of characters either. But, if you are going to do it – don’t make them look the exact same as they were in the past.
It is like a slap in the face to long term fans to think we don’t actually notice these things.

McDonald is an interesting choice. I never would have thought of him for the role of the senator, but he’s a good choice.

Okay, let’s deprive a deserving actress of a job so that nitpicky Stargate nerds can feel 1% more at ease while sitting on the couch with doritos all over their chests.

Oh no. please not another case of ‘Simon’ who looks like a guy called ‘Narim’

well, the charas need a background, dr weir had a good one…(jack had the best!).
;)

Ona Grauer is [F-BOMB] beautiful. When I watched Frozen I didn’t wanted her to [F-BOMB] die that way. It’s always feels terribly wrong for a guy if woman just dies in front of his eyes. But in that case it was even [F-BOMB] more heartbreaking.

Another superb piece of casting! Truly brilliant! Christopher McDonald’s a great actor! Can’t wait to see him as Senator Armstrong!

wow! thats all i can say but im confused wasnt cooper and wright claiming left and right they wanted a “younger, edgier, sexier, cast”? so what happened? i mean not to offend the new cast some are young and sexy but com’on they keep getting older than the cast from sga and sg-1 oh and not to mention they offended the cast from sga saying they are too old and they wanted to reach out to a younger audience. mmmm, i wonder if they have read all the complaints the fans have been writing on here.

I’ll take all the Ona Grauer they can throw!

Chris Mac is very cliche for the politition part, so whatever.

Mister Mcdonald should be good he was great as Leiutenant Richard Castillo on TNG’s ep: “Yesterday’s Enterprise”

For a show that is supposed to be drawing in a younger crowd there sure are a lot of has-been’s in this cast!!

It looks like the writers/producers are shooting for a broader spectrum of ages for the characters. Perhaps it will create some intergeneration conflict for a more dimensional dramatic flavor.
Also it must mentioned that Christopher McDonald was exceptional as
the voice of the character Kent Mansley the FBI troublemaker in “Iron Giant”.

For those who whine about “recycled actors”, most actors work in specialized areas, and Sci-Fi meets that definition big-time. The reason you see many Sci-Fi actors around different Sci-Fi shows is that not everyone can handled the technobabble that is a hallmark of Sci-Fi. And for those who don’t care or just aren’t smart enough to understand it, there are those of us that do,and that’s why they use it. Many people joined the Space Program because of their interest in the shows we love so much or grew up with. Genre actors are easily used over and over because… Read more »