Entertainment Weekly has just published the exclusive first cast photo for Stargate Universe, the new series in the franchise that is due this fall on SCI FI Channel! 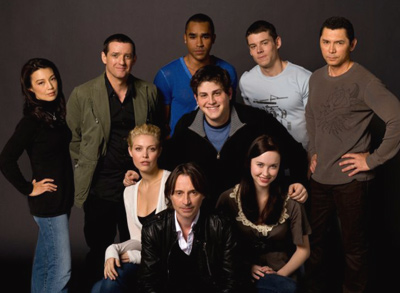 Check out the Stargate Image Gallery for a high-res version.

Be sure to head over to EW.com to see the original story, and don’t miss the 30-second preview (yes, we wish it was longer, too) during the 2-hour series finale of Battlestar Galactica! It starts at 9 p.m. (Eastern/Pacific) on SCI FI.

That’s great and all…but is it just me or does it look a bit blurry?

Still though, looking good. Nice to see the cast in their first photo. I wonder since Ming-Na and LDP are pictured with the cast will signalify they are part of the cast?

Just a guess, but maybe?

Not very revealing in any sense but then again why would it be. Comments @ the EW site seem to be concerned about the quality of this show… I get the chance this show won’t have much time to find it’s legs – if it doesn’t come out swinging with high-quality episodes from the start fans are going to do what they do best and complain which will scare of potential casual fans which sci-fi, or rather syfy :-p, wants for their ratings.

I have always been a fan of Robert Carlyle’s movies and i’m glad to see him coming on.

Well some people on EW site do not seem to be willing to give it a chance. Some of the commits is just dismissing the show altoteather. And it a shame still 90210 comment still flying around considering the story details we seen so far.
One thing I will is the photo is pretty poor.

Well some people on EW site do not seem to be willing to give it a chance. Some of the commits is just dismissing the show altoteather. And it a shame still 90210 comment still flying around considering the story details we seen so far.
One thing I will is is that the photo is pretty poor.

Good pic, but SO many people! I’m really not looking forward to a big cast. SGA had a big “main cast”, and it always seemed like one or two characters always got left out.

I liked SG-1, four main characters (Jack, Sam, Daniel, Teal’c), and two main recurring characters (Hammond, Janet). I think it gave the show a much more family aspect, since the characters were so close to each other.

I know that this is what we’re getting with SGU, but it’s JMHO.

9. pm Eastern/pacific time?!? awwww
cu on saturday GMT… :(
But I like the actors. They kinda seem to fit together…
Even if it’s just a 30min. trailer. It’s defenitly WORTH WAITING AND WATCHING!!!

Wow. I never realized until now how very white Stargate is. So very, very white.

I hope that isn’t a racist remark…We’ve been through that many times and have disproved it.

IMO six out of nine white faces isn’t terribly bad for television today. It improves when you stop thinking about skin color and start thinking about actual nationality. These nine people represent seven countries of origin.

Great cast!!!! Cool photo!!!! Looking forward to seeing the first photos of these people in their costumes!!!! :D :D :D

Roll on tonight’s preview after BSG!!!!

Who is the 12 year old kid in the middle?

The cast looks go! Thank god it wasn’t Photoshoped like all of the previous cast photos from the previous two series.

Well, now that ppl have seen the promo. And its FAR from 90210, I hope they will finally shut up about it.

Oh my, none of these people really seem to have, “it”. Which one is supposed to really grab me? Think about it. Richard Dean Anderson, Michael Shanks, Corin Nemic, all HOT. Joe, Hot…. This bunch just NOT……

Want “hot?” Go turn on One Life to Live. SGU, bring on the new sci-fi adventure.

I kinda echo Orion’s concern; ever since I heard the announcement of Lou Diamond Phillips, I immediately got a “Colonel Marshall Sumner” vibe from him. Siiigh.

Here’s what they’re thinking…. Ming-Na: “Am I out of frame yet? Cause, I’m not sure if I want to be on record that I’m down with doing this whole Stargate thing.” Justin Louis: “I can be a happy soldier!” Jamil Walker Smith: “I just hope I break Rainbow’s episode appearance record” Brian J Smith: “(smirk) Looks like while my character gets the alien hotties I’ll be gettin’ all the “Will you sign my boobs?” at ComicCon” Lou Diamond: “Hurry up and kill me off already.” Alaina Huffman: “Oh god, he’s touching me again” David Blue: “I wonder if my parents… Read more »

By just looking at the cast photo I got a really bad feeling about this. I guess we’ll just have to toss it into the water and see if it floats. :o)

Stargate is white???? (Teal’c – SG1), (Ford – SGA). What is the average age to be a real Sgt. ?. And David Blue is way too young looking, so not credible. Puddlesplasher – I think MingNa was already on SG1 season 9. Your think bubbles are cool. guys – I think your auto spellchecker isn’t working. ref: signalify – not a real word. altogether comments definitely. (No insult intended) Good one ‘AsFarAsLarry’ a sending up of how young the casts are getting, incredible(SG1 200) Ref:….Simpsons (Admiral Baby)lol!!!! People keep mentioning 90210 because it actually cements the point that the cast… Read more »

Danybrean – UNREALISTIC? Yeah and i giant round circle really travels the U.S Military to different plants and galaxys! LOL

Now that IS realistic^^^

What the Heck? Why does this crew need 2 Colonels as crew? Are they all going gung-ho ready for war games, or just all out Battle? Apart from that, 2 Colonels handling how many troops? LOL, 1 Sargeant, 1 Leutenant, a bunch of hotties (Okay, i’d like to command them as well).

Well, I have a feeling that LDP as “Colonel (No First Name) Telford” is probably going to be Sumnerized.

I am just glad Stargate didnt die completely. And I hope that this is good and can last longer then Atlantis!!!! I need my sci-fi fix!!

there not really my cup of tea!!!! and yes i still think is 90210 or stargate morons lost in space he he

I hope this show gets cancled. We should all boycot it.

Well, it does look interesting, (he said grudgingly). My biggest beef wasn’t with the show itself, but, the shabby way the cast of SGA was treated; basically they were all tossed out on their asses. It makes me a little leery of getting into this show. SG1 went 10 years, SGA went 5. So, I’ll give this one 2.5 seasons before Brad Wright finds another toy he wants to play with and, tosses this one.

No, the cast doesn’t look convincing but I will give this show a chance. But I have my serious doubts and I hope I am 100% wrong. I want Stargate to continue on for as long as possible. The photo in this is a fail!. 5.5/10 for me

Thanks guys for the cast photo’s. I like Jamil and David not bad..Lou Diamond is a very good actor,but whats he doing in SGU? It looks a nice group together. Its realy nice to see them it gives a better idea how it looks like.
Are there more promotion photo’s coming in their clothers they have on in the series? Like to see that as well. Thanks for shwoing us the cast photo’s.